During static fires of the Starship engines the exhaust goes everywhere creating a dust cloud, hitting everything with sand.

Why does Spacex in Boca Chica not have a flame trench at the Starship test site?

They simply haven't needed it for the testing they've been doing so far. They've been doing single-engine tests and working toward 3-engine tests, and have a lot more work to do before constructing a complete launch pad in Boca Chica. Their planned additions to LC-39A in Florida give some idea of what they will have to build at some point in the future. From SpaceX's draft environmental assessment:

The launch mount would be elevated up to approximately 30 m to reduce excess recirculation and erosion from rocket exhaust. A flame diverter would be constructed instead of a flame trench as is currently used at the Falcon launch mount. The flame diverter would be composed of metal piping similar in construction to the SLC-40 water-cooled diverter. It would measure approximately 20 m wide by 20 m tall and be positioned directly under the rocket. It would divert the heat and rocket exhaust plume away from the launch pad and commodities.

Steel is extremely strong (taking alloy-specific temperature limits into consideration). As impressively large as the thrust forces sound, keep in mind that the bottom of the rocket has to withstand the same amount of force, and it has to do so with the bare minimum of material.

They are building something to handle the thrust at LC-39A, where they seem to intend to launch the full vehicle. That would be a 31 engine Super Heavy thrust (400Klbs X 31 = 12.4 Million lbs thrust). That is more than a Saturn V or a Space Shuttle.

It is unclear how the size and scope of the current construction at LC-39A will handle that large a vehicle. 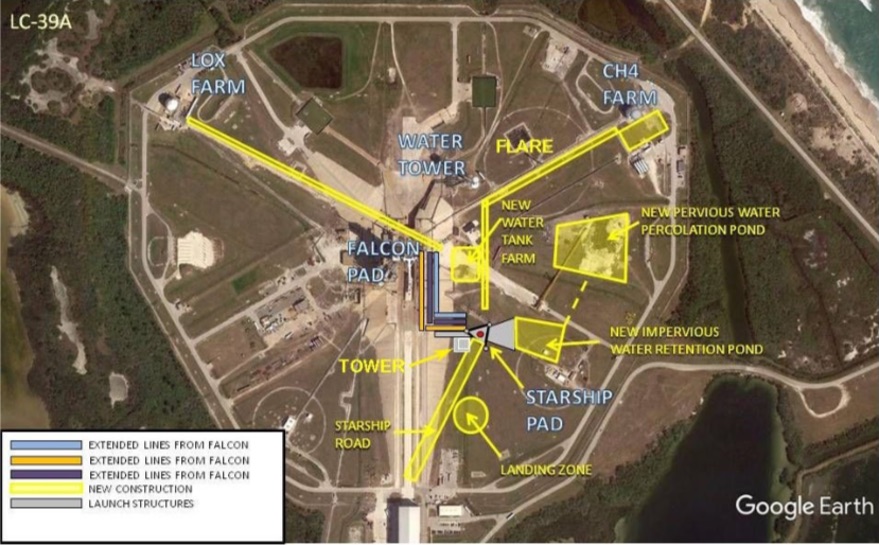 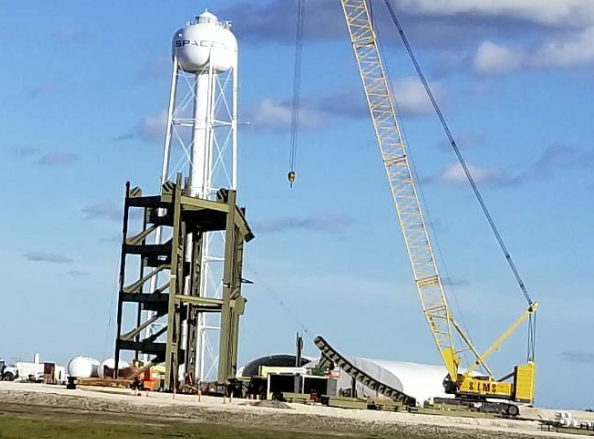 And for contrast a side view. 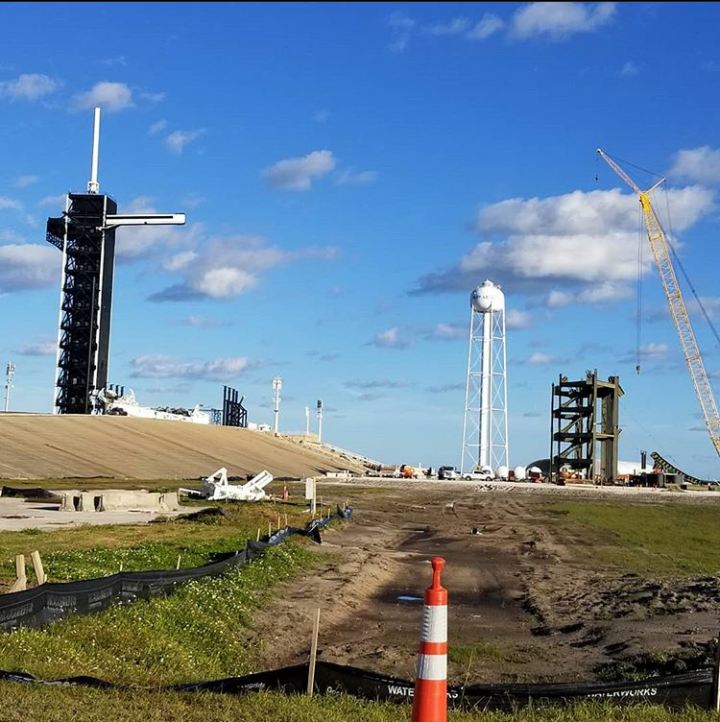 At Boca Chica, they seem to be doing a lot of just in time development. The first set of vehicles they have fired with an engine were using a single engine and mostly static fires. They have been able to manage this without any kind of flame trench or niagara water deluge system, yet.

Once they move to 3 engines on Starship testing or even the most basic of Super Heavy testing, they will clearly need something more.

I read a while back that the geology at Boca Chica is bad for large structures. It’s basically a large, deep sandbar, no bedrock for hundreds of feet. Seems like Elon had plans to make BC a major launch facility, but you don’t hear that anymore.

Did a bit more digging. 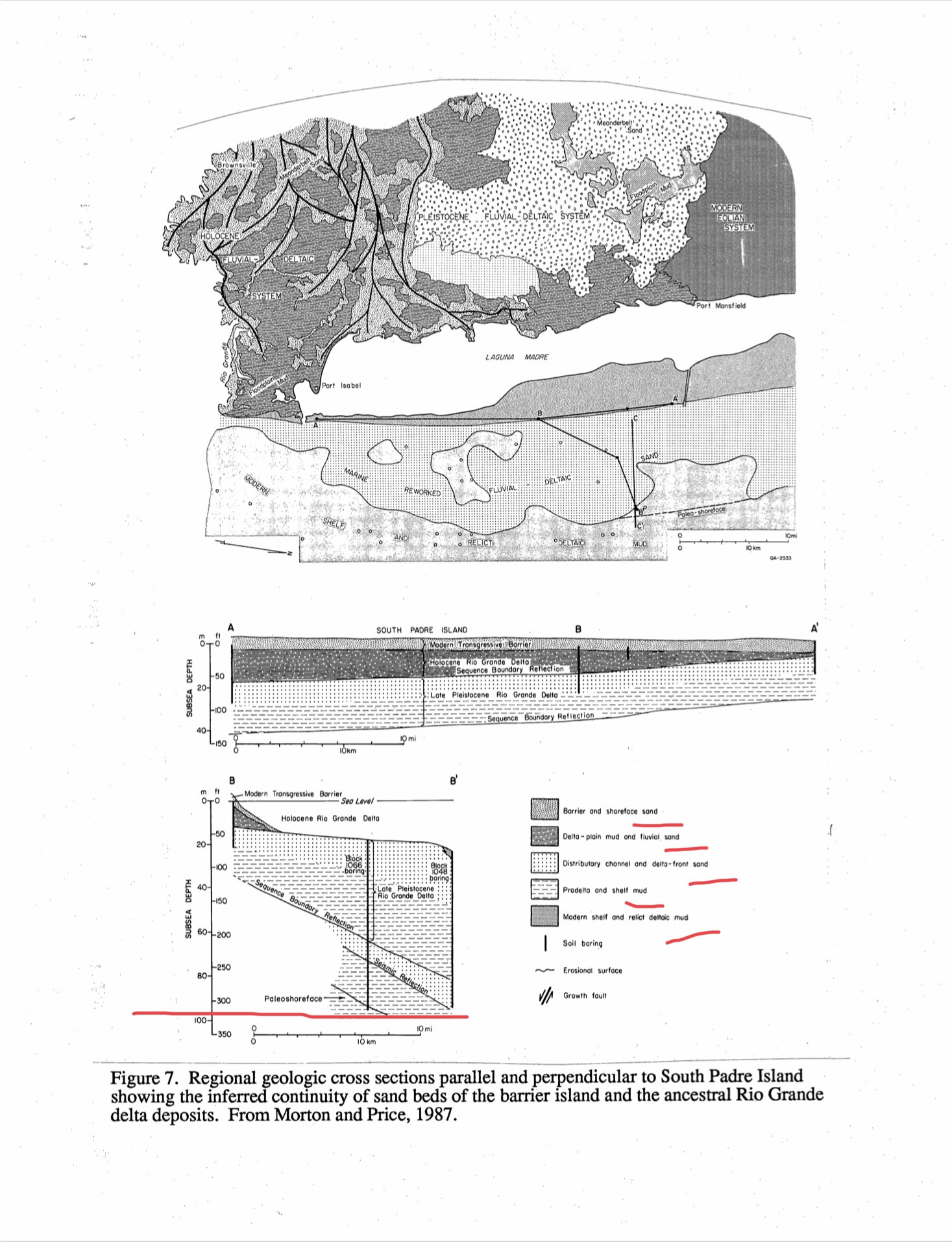 Bores to a depth of just over 300 feet in the South Padre Island area. Based on the maps, I put that about approximately 30 miles from the SpaceX site in Boca China. No rock found, mud and sand to 300 feet.

Granted, that does not mean there is not bedrock under the site, but it does not bode well for it being shallow. 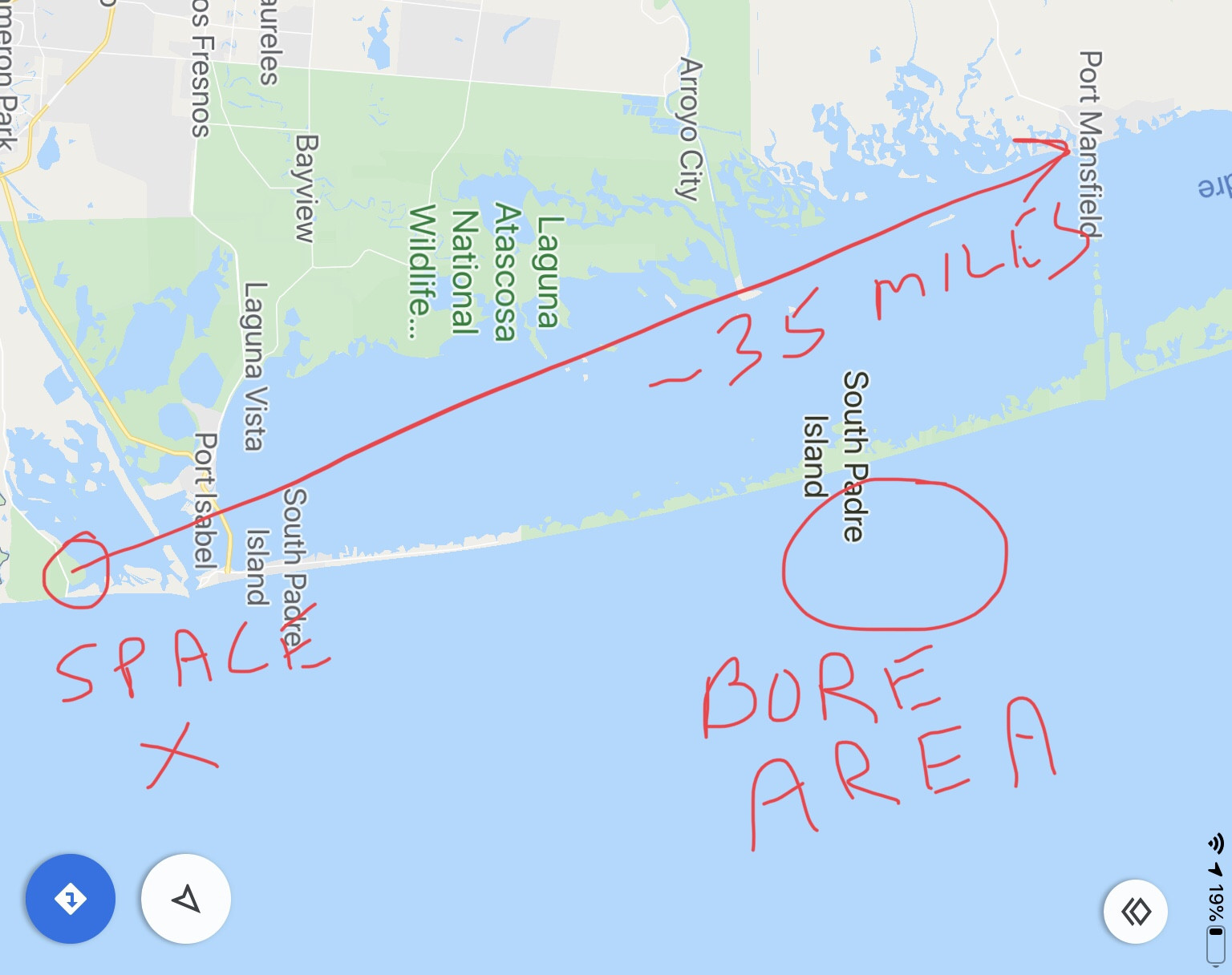 Not the answer you're looking for? Browse other questions tagged spacex spacex-starship flame-trench or ask your own question.

18
Why will Superheavy/Starship have a landing pad so close to the launch pad?
5
Issues with multiple raptor engines working in tandem in starship
2
How can Starship take off from moon's surface without a launch pad

10
What is the cause of the blue light from LH2/LOX rocket engines?
11
Merlin engine stoichiometry
2
How does this fast-slewing SpaceX rocket-tracking dish track a moving spacecraft?
3
For the Starhopper testing, how will SpaceX hold down the vehicle?
11
Why did the SpaceX Starship MK1 prototype pop?
23
Why isn't SpaceX constructing the Super Heavy launch mount on top of the water?
6
Doesn't dirt get into critical Starship parts?