What is the maximum practical deltaV obtainable from a chemical rocket launched from earths surface?

What is the maximum practical deltaV obtainable from a chemical rocket launched from earths surface?

Not an exact number as there are too many variables but an approximate maximum assuming a 10,000kg, payload, with propellants, engines and structures in use today, as many stages as required and total lift of mass not to exceed 6000,000kg

About 19 km/s with two stages.

Once we're out of the atmosphere, we can get higher $I_{sp}$ and possibly higher mass ratio a we don't need much thrust. Something like a space shuttle external tank with a fairly small but efficient engine will give you a mass ratio of maybe 25 and an $I_{sp}$ in vacuum of about 450s. It's dry mass is only about 30 tons.

So let's stick to a two stage model and see what numbers we get. We'll take $M$ as the wet mass of the upper stage.

where the exhaust velocity $v_e$ for the Tsiolkovsky rocket equation is the product of $I_{sp}$ in seconds times standard gravity $g_0$, and $log$ is the natural logarithm.

Differentiating and solving numerically, we get an optimum $M$ of about 360 tons (roughly half a shuttle external tank) for a delta-V of about 19 km/s (before air resistance and gravity drag).

Going with another stage might help a bit, as we are still carrying over 10 tons of dry second stage at the end of the acceleration. A similar, but more complicated calculation should handle that case.

About 21.3 km/s with 5 stages. To develop this model, I used Kerbal Space Program with Real Solar System & Realism Overhaul.

The rocket as built, by stage (dimensions given in diameter x length)

Payload was slightly over 10 tons (10,010 kg), containing avionics, batteries, and lead ballast to make up the difference. All dry mass values for stages contain the estimated masses of decouplers, engines, turbopumps, fairings, etc. Payload fairings (which enclose the two balloon tank stages) decouple shortly after the second stage ignites. Hydrolox stages are either a Centaur-derived stage or use SOFI.

As you can see, mass ratios are rather south of pessimistic (likely because I used a generally more-than-optimal number engines per stage), except for the Transtar-derived upper stage. However, Transtar was in development to have an extremely low mass ratio (see reference), and I think with modern (Steel-Al-Li) balloon tankage, such a ratio is possible. The long burn time is also reasonable--the Transtar engine was derived from the Shuttle OMS, which had a EXTREMELY high rated burn time.

Together, this gives me about 21.3 km/s, 21.6 km/s if only vacuum dV numbers are summed. Again, note that my mass ratios are generally much lower than the that of the other answers'. If the middle stages also had ~20:1 ratios, then it is likely that you would achieve in excess of 23 km/s on the pad. Also, of course if you replaced some of those 10 tons of payload with some high-performance light solid stage, you would be able to get even more dV out of your setup. Tsiolkovsky is an inescapable god, and he loves more stages.

Additionally, I demonstrated that such a rocket could be flown to 200 km orbit successfully. Details may be found in this imgur album.

Such a rocket would look something like this upon liftoff: 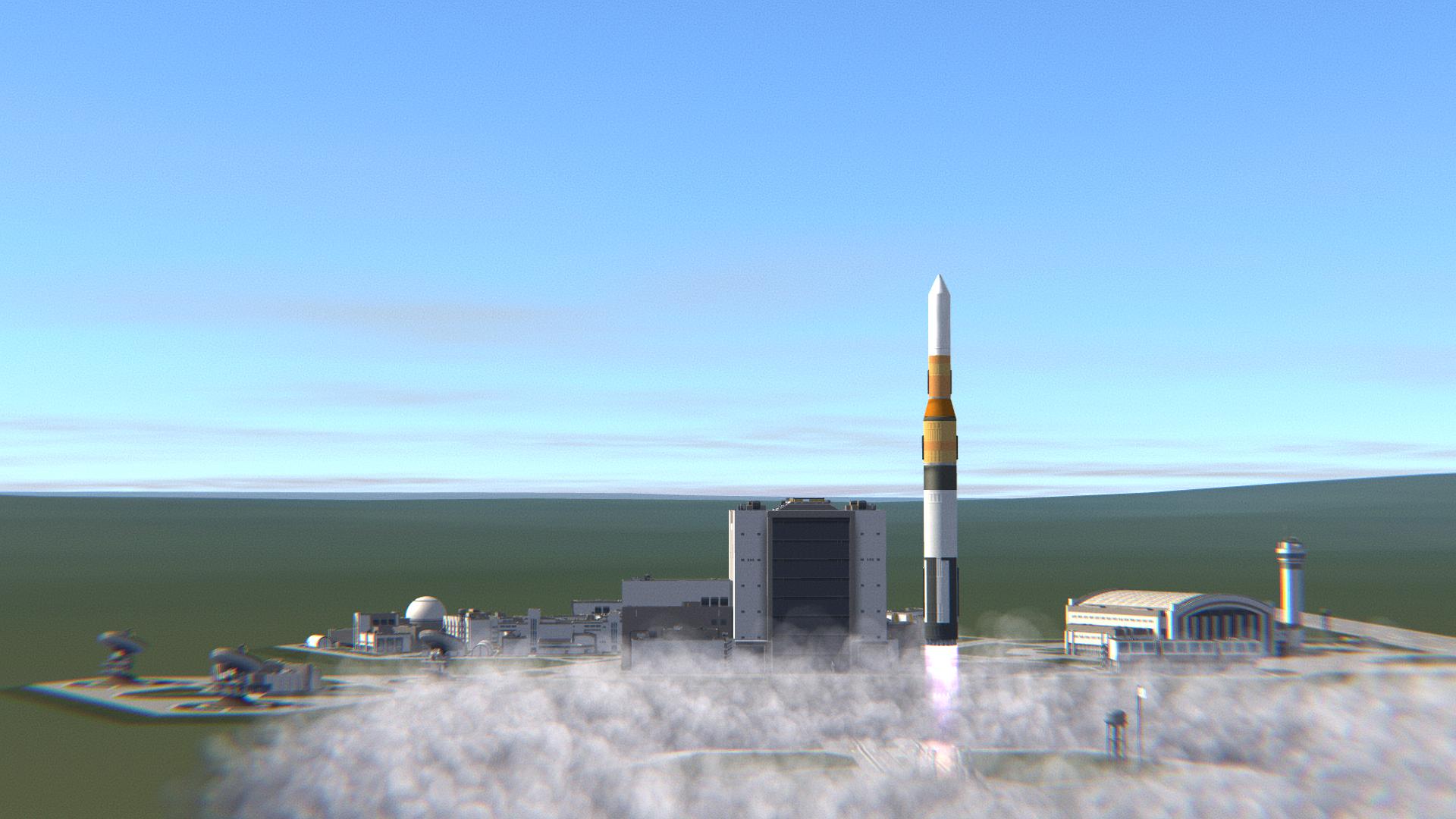 And something like this after staging and fairing separation (forgive the unrealistic hydrolox vacuum plume, the RO dev team fixed this but I am still playing on an older test build): 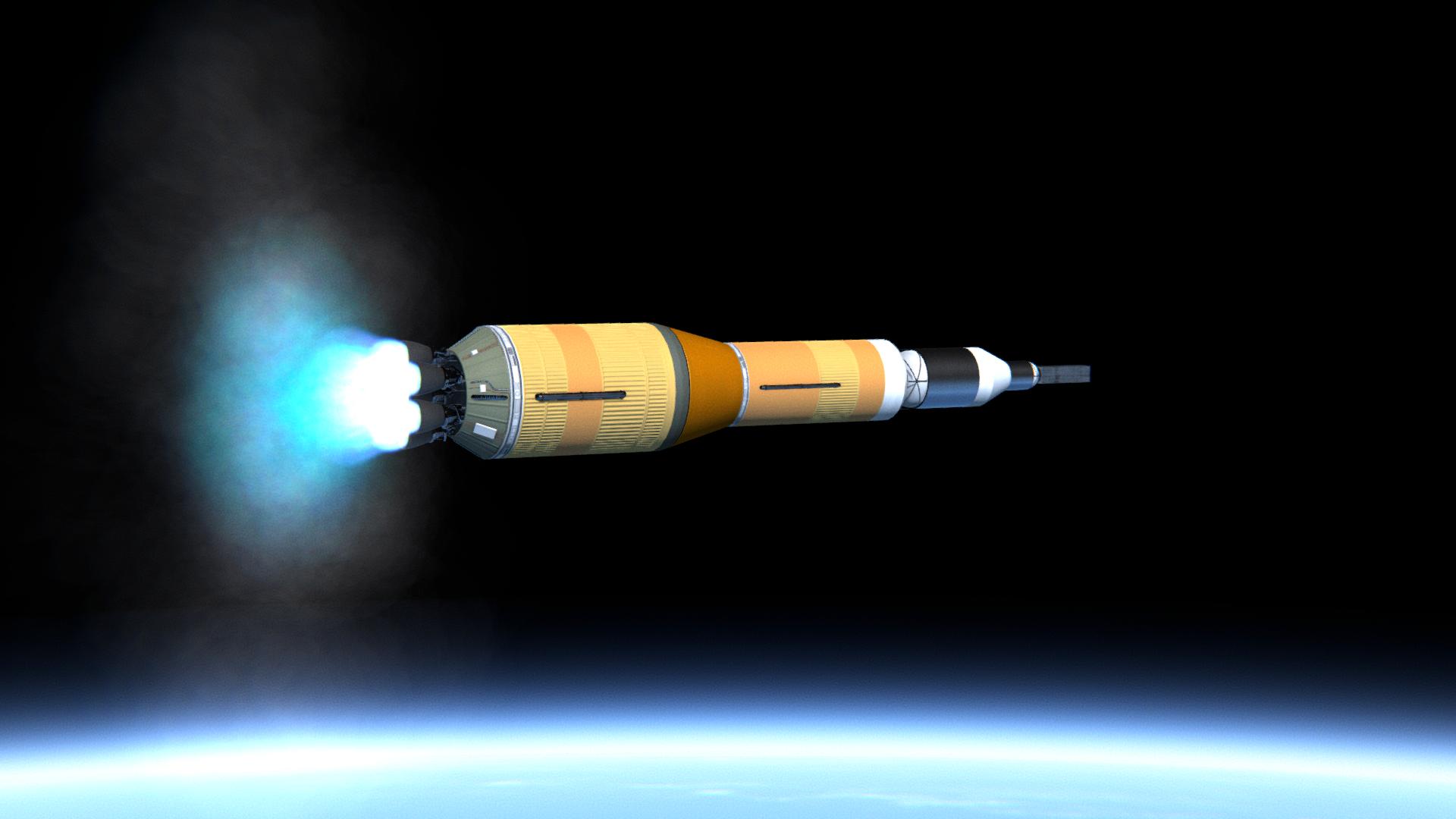 If this KSP-RSSRO-sourced answer is not satisifactory for this SE, I will remove it.

Not the answer you're looking for? Browse other questions tagged rockets launch technology rocket-equation or ask your own question.

40
What is the vapour/smoke that comes from a rocket before launch?
8
What is the practical limit on reusable chemical rockets?
10
If a rocket launched due East from a high latitude, what happens to its path?
87
How much bigger could Earth be, before rockets wouldn't work?
25
Which has been the most gregarious rocket, launched from the most sites?
10
Why aren’t rocket stages modular and interchangeable?
0
Need help with 'Tsiolkovsky's Rocket Equation': What's the maximum weight of my rockets command module?
7
Has any rocket been launched into orbit from a plain flat surface?