Jovian moon Europa's icy surface is pretty flat and let's say astronauts would wear ice skates attached to their spacesuits, what would ice-skating be like on Europa? Due to Europa's very low gravity (1/7.5 that of Earth) it would probably be easy to make figures in the "air" and many of them, right? Would the lack of an atmosphere change something? How would it be different from ice-skating on Earth?

Why Is Ice Slippery? That's a surprisingly involved question. The main takeaways:

When it comes to texture, ice generally also has less friction because it is very smooth, on Earth forming on top of bodies of water that are the very definition of "level".

By contrast, ice is more of a geological thing on Europa. New material is occasionally brought up from the levels below, in what is more analogue to volcanism. Ice is rock and terrain there.

From this, I can't see how skates will be any more useful than on our Moon.

"Jovian moon Europa's icy surface is pretty flat", you say, but we actually don't know that! We know that its very flat in respect to large scale features. In the relatively low resolution images and measurements we currently have, anything "ice rink-sized" wouldn't even be visible.

There's speculation, for sure, a search on the internet for what texture Europa may have will not miss the possibility of extremely non-smooth ice spikes!

Wikipedia image of ice spikes (not skating friendly) in Argentina for illustration: 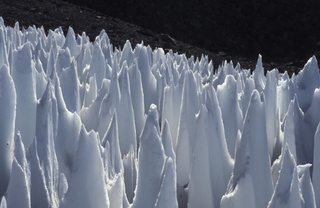 Mission control will also like to note that they do not approve of "unlimited speed!", "no air resistance!" and "extremely cool figures in the air!" for meatbags on this multi-trillion expedition.

There is the highest resolution photo of Europa surface by Galileo probe. Resolution is 6 meter per pixel.

We can see the surface is no so flat, more suited for alpine skiing than ice skating. :)

1
Do penitentes predicted on Europa only apply to snow-covered areas and not bare ice?

17
How would a probe land on Europa?
11
What causes the cracks on Europa to form?
1
Terminal velocity on Europa
2
How would a robotic landing on an icy moon like Europa differ from landings on the Moon, Mars, Venus, Jupiter, Titan, asteroids, comets?
2
How likely is that Europa actually has no ice layer?
14
Would a Europa lander need radiation shielding similar to Juno?
11
What would the human gait look like on Mars?
3
Would it be possible to send a nuclear bomb to Europa and make a hole in the ice of more than 11 km?
4
Why does Scott Manley say "the gravity of Europa is low enough that it's at the high end of what is possible in scuba with highly technical gear"?