What (if anything) limits the efficiency of a rocket engine?

Humans have developed lots of rockets. I observe that in most cases to increase the payload capacity we just increase the amount of fuel.

Is it not possible to exponentially increase the efficiency of our rocket engines by changing design of rocket, or is there a limit to the efficiency?

First of all: Thermodynamics!

Actually, the efficiency in numbers is always between 0 and 1. Not only in rockets, but in everything … like really everything … clicking the keys on the keyboard, your muscles do work, they transform chemical energy (food and oxygen) into movement, they have an efficiency of (not sure exactly) 0.3. So about two thirds of the energy needed is heating your finger up. A car is burning (transforming) fuel (chemical energy) into movement (kinetic energy), efficiency about 0.1. An electric heater transforming electric energy into heat, efficiency nearly 1. Tapping on your desk to heat the bathtub, efficiency nearly 0. A classical light bulb (transforming electrical energy into light), efficiency about 0.05.

So back to topic: "Why not just increase efficiency". The efficiency of rockets is about 0.678 (source in german). Sounds bad at first, but thermodynamics has something called "carnot efficiency" which is the theoretically maximum technical efficiency for machines making work by heat. Mostly it results in something between 0.6 and 0.7 … making our rocket quite efficent.

Aaaaaaand: actually a whole bunch of people all over the the world are trying to make them more efficient. They can get some percent here and there, but they cannot reinvent the wheal.

Which actually means: At some point, you cannot simply make the exhaust gases of your rocket faster (because: thermodynamics), so you need to take more fuel with you in the first place.

You want to make a larger tour with your car: Visit a fuel station first! For groceries around the next corner, the rest in your tank will be sufficient.

And in the end, allow me a question: Am I understanding your question wrong, or did you really think nobody has thought of "simply improving" rocket designs? (I am not the downvoter, but I think that is what she/he might have thought)

The existing answer is good, but I'd like to touch on part of the thermodynamics: the nozzle.

A rocket creates thrust essentially by converting pressure (coming from combustion) into velocity of a stream of gas. Most any rocket worth its salt does this with a converging-diverging nozzle that constricts the high pressure flow until it becomes supersonic, then expands it until the pressure drops enough that it isn't worth expanding it any more (because eventually you need very large nozzles to keep catching the expanding gas--see for example the difference between the sea-level Merlin engine and the Merlin Vacuum engine.)

Chemistry and materials conspire to limit reasonable nozzle performance. Any hot gas can essentially only push so hard, limiting the exhaust velocity of the rocket engine (thus ultimately its overall efficiency).

If you are willing to be a bit flexible about what you define as a 'rocket' and embark on some fairly (OK, very) mad science, then there is indeed a well-defined limit to efficiency. The most efficient possible 'rocket' you can make is something which emits light, and which does it by consuming mass with complete efficiency, so all the energy implicit in the mass is turned into light. The way to do that is to have your rocket be fuelled by equal amounts of matter and antimatter (but even then you probably can't get very close).

If you can do the annihilation completely efficiently, so that all you get out is photons, and you can arrange life that all these photons contribute to your momentum (see notes below), then you get this equation: 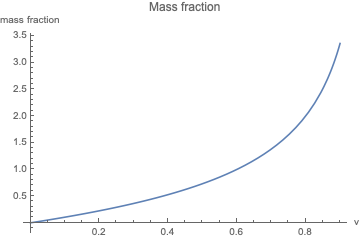 Why this isn't practical. Well, there are a very large number of reasons why a system like this is not practical: this is very much a mad science idea.

Production and storage of macroscopic amounts of antimatter is challenging, to put it rather mildly. I don't know how much antimatter has ever been produced but it's a small amount. Storing it in large quantities is going to be really hard (I really don't have any idea how you'd do it at all), and the cost of making a mistake is appalling: you really do not want the power to fail in your antimatter storage system if you have any macroscopic amount of the stuff.

The 100% efficiency thing is a problem. If you collide a proton with an antiproton what you actually get is some shower of unstable particles, which I think eventually must all decay to light, but only if you can arrange for them to be near each other for long enough. And some of them, for instance, are neutrinos, which are not easy to contain, to put it rather mildly.

If you collide electrons and positrons, you do just get light. But you now have the problem that a lot of the light that is produced is in the form of very high energy photons (gamma rays) and these are very hard to reflect efficiently with any kind of mirror you can plausibly make. And also you need to store a lot of electrons and positrons, either by attaching them to protons / antiprotons as hydrogen / antihydrogen, in which case what do you do with the protons and antiprotons (which are almost all the mass!) left over, or by some approach mad even by the standards of mad science.

But, well, this is the theoretical limit: you can't do better than this, even in principle, with anything that might count as a rocket, short of radically new physics.

28
What will be NASA's successor to the Saturn V rocket?
9
Limits of bypass ratio in air-augmented (ejector-jet/ducted) rocket
3
Is there a non brute-force algorithm for finding the combination of rocket components to maximize delta-v for a certain launch mass?
4
Optimal size for heavy-lift launch vehicle
9
Is ISP all there is to engine efficiency?
4
Pollution by rockets and missiles
1
Could rockets benefit from Reaction Engine's Air-Breathing Rocket Engine in terms of payload?
7
Why does this formula say rocket efficiency depends on velocity?
4
Are rocket tanks being filled up until the last seconds before liftoff?
1
What is the point of having a central rocket engine when it receives performance losses?