With a 10% increase in Earth's mass, would the Karman line move up or down, and by how much?

This is an exercise to better understand the basic physics and math behind scale height and the Karman line. It was inspired by this answer to Why is FAI considering lowering the Karman Line to 80km? (also note they might not be anymore; for more on that see answers to When is/will be the symposium to revisit the Karman line and consider the "McDowell line"?

For the purposes of this question:

Question: With a 10% increase in Earth's mass, would the Karman line move up or down, and by how much? 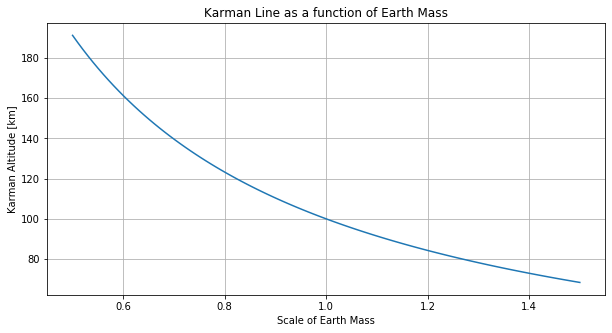 It would move Down!

By the definition of the Karman line on wikipedia, the lift force and the "centrifugal force" must be equal to the gravitational force and, therefore, each other. This gives the following equation:

Where $\rho$ is density, v is velocity, $C_L$ is lift coefficient, S is wing area, m is vehicle mass, $R_e$ is the Earth's radius, and h is the altitude.

The velocity terms cancel and I assumed that $C_LS$ and m canceled because S is entirely a design choice and could be chosen such that $C_LS$ was equal to m; regardless, the Karman line should be independent of vehicle (for practical purposes anyway). Following these simplifications, the equation becomes:

Applying the Scale Height model you provided gives a means to compute $\rho$ as a function of altitude. I tried to solve the resulting equation analytically, but It got rather nasty and so I used a zero finder.

Per the "scale height approximation", the density as a function of altitude is the following:

$\rho(h) = \frac{M_{air}P_oe^{-h/H}}{RT_{avg}}$ with $M_{air}$ being the mean molecular mass of the atmosphere, $P_o$ being the s.l. pressure, R being the gas constant, and $T_{avg}$ the mean atmospheric temperature. Pressure ($P_o$) as a function of depth in a fluid scales linearly with the gravitational acceleration- I am assuming the height of the atmosphere to remain the same and the surface pressure to scale with the increase in surface gravity.

$H$ is the scale height and represents the height in which the pressure decreases by a factor of e. It is defined as the following:

The final equation I used to zero find for the Karman altitude is this:

Finally I could adjust the Earth's mass. A mass of 1.1 Earth's decreased the Scale Height from 6.47km to 5.88km (effectively increasing the pressure gradient of the atmosphere and providing a lower density at a given altitude) and provided a new Karman Line at 91.5km

EDIT: I would like to say that my algebra in regards to the canceling of $C_LS$ with m is a bit iffy. The Karman line is very dependent on vehicle mass and lift characterisics. For the purposes of simplicity, I was assuming the two values were equal, but realized a moment ago that their units do not cancel. The math still holds, but the algebra should include a unit factor containing the missing dimensions.

Not the answer you're looking for? Browse other questions tagged atmosphere physics karman-line lift or ask your own question.

24
When did planetary scientists realize Venus' surface pressure was almost 100x that on Earth? How did they find out?
13
Why is FAI considering lowering the Karman Line to 80km?
12
What would a "Kármán plane" look like, a bird, or a plane?
3
When is/will be the symposium to revisit the Karman line and consider the "McDowell line"?

11
Why is the Karman line for Mars defined higher than for Earth?
8
What are the characteristics of the Earth's atmosphere near the Karman line and why?
16
How can an *increase* in atmospheric temperature cause an *increase* in the atmospheric mass density?
8
Did the Soviet Union put an unmanned satellite in "very low orbit"above the Kármán line which used aerodynamic attitude control?
7
What is the practical use of the Karman line?
13
Why is FAI considering lowering the Karman Line to 80km?
4
When do aircraft become solarcraft?
1
What are the minimum and maximum calculated, published altitudes of the Kármán line?
3
When is/will be the symposium to revisit the Karman line and consider the "McDowell line"?