What caused STS-129's low energy condition on the HAC?

I've never heard anyone comment on the trouble STS-129 seemed to experience during the Heading Alignment Cone (HAC) phase. I was hoping someone who was involved with the program might know why it happened.

The green line represents the expected HAC spiral for this mission. The yellow line is STS-129's ground track: 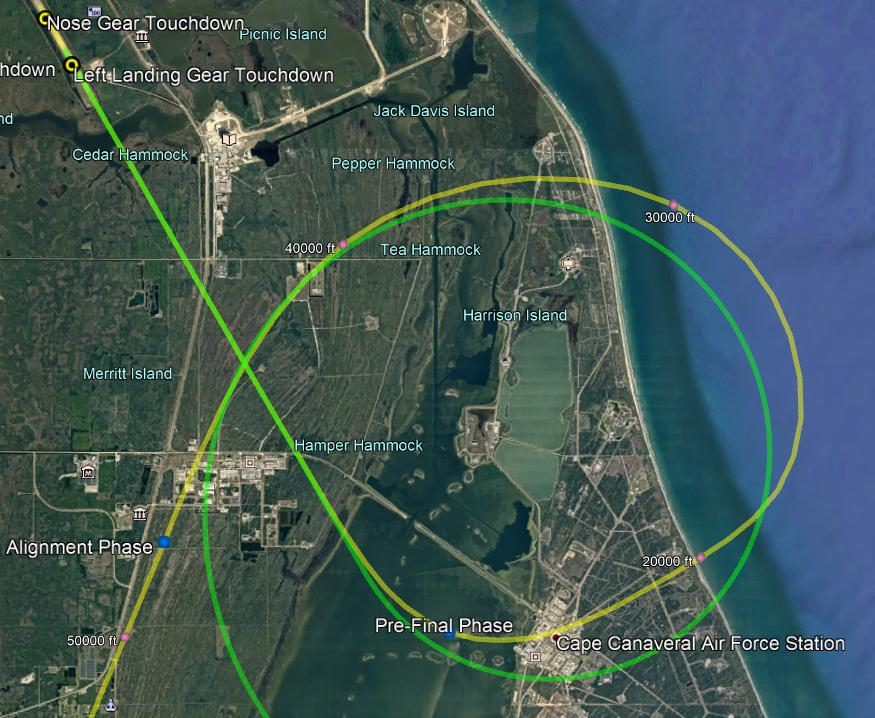 As you can see, the ground track reaches the tangent point on the HAC and then starts its right turn, but the turn is wide and goes well outside the HAC. Eventually it makes a sharp turn and cuts inside the nominal HAC. Then it follows an almost a straight line for a while before making a final turn towards the runway. You can see the orbiter roll almost level around 20K feet in the landing video.

Not only was the turn too wide, the orbiter was also low in altitude, as confirmed by the Heads-Up Display (HUD), CAPCOM call-outs at 180° and 90°, and a side view of the ground track: 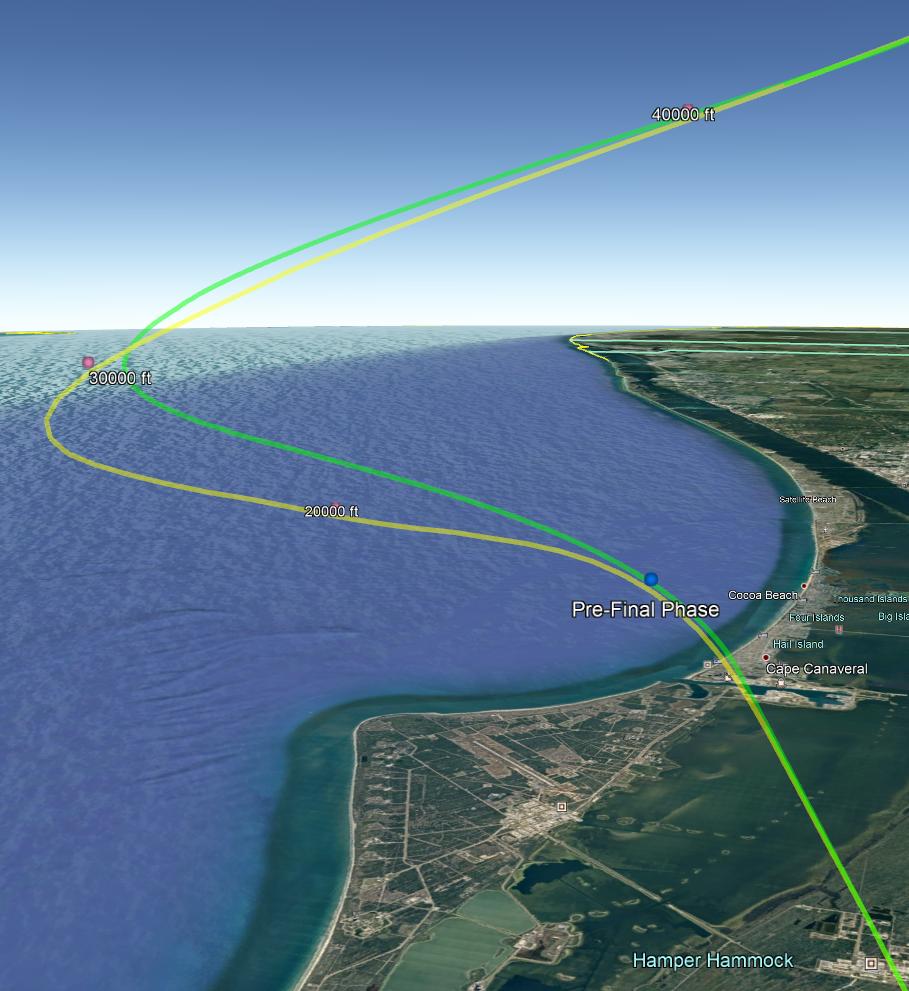 The low altitude, combined with the fact that the HUD shows the speed brake closed as far as allowed, paints a picture that Atlantis was low on energy. I suspect the ground track cutting inside the HAC and the sharp final turn towards the runway are due to HAC radius shrinking:

The HAC radius is now adjustable after the HAC turn phase starts. A low energy condition of sufficient magnitude will start shrinking the radius.

The question is, what caused the initial low energy condition? Was it high winds aloft? The commander being slow to react? Both? Some other contributing factor? Were high winds expected? I have to imagine NASA reviewed it internally, and perhaps incorporated lessons learned into training for the remaining missions. I would love to hear about it, if so.

STS-37 landed short of the runway (though still safely on the dry lake bed at Edwards) due to high winds aloft and the commander (Steven Nagel) not responding to guidance fast enough. Nagel later said:

I pass it on when I’m instructing with the STA (Shuttle Training Aircraft). I can set up an approach that looks similar to that, low energy, and say, “If you ever get here, don’t mess around. Get back on the glide path right away.” I was trying to be real smooth with it and not fully complying with the guidance command, just partway to be smooth and get it back, and that wasn’t the answer that day.

Comparison to Other Landings 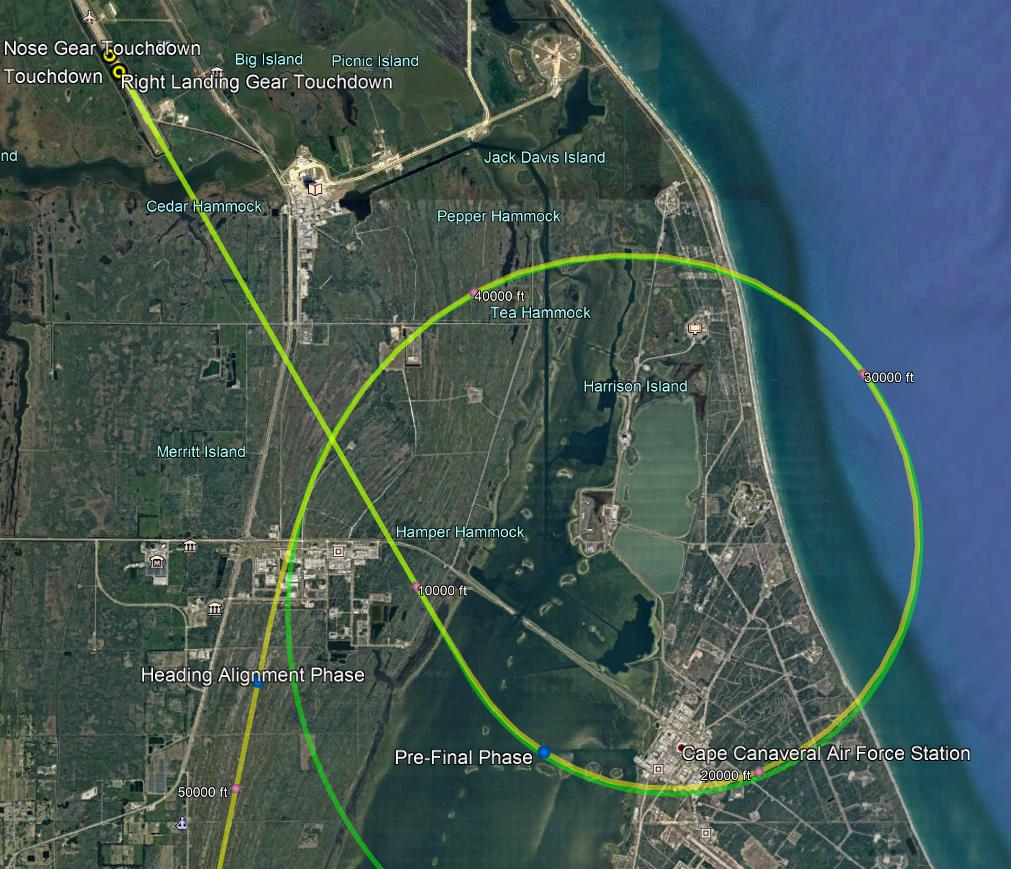 I only have ground track data for STS-127 through STS-135, so it's possible that low energy conditions were more common than I imagine, but in the limited data I have, STS-129 is the only outlier.

This clip from the entry flight control team (at about 3:40) suggests that the low energy state was expected as a result of the wind speed. Not sure what explains the wider flight path, though.

17
What was the space-worthiness determination procedure for STS-1?
12
What were Prince Sultan's duties in STS-51-G?
14
Was a method available to save the Challenger Crew?
8
What is making the glow from this image of STS-135 going home, de-orbit burn or re-entry?
43
Why didn't the Space Shuttle bounce back into space as many times as possible so as to lose a lot of kinetic energy up there?
27
What were the differences between the STS Orbiters?
7
What are the round screens show in the MOCR near position 19 (FDO?) during STS-49?
1
What EVA activities were planned for STS-80?
16
What did the "R" in e.g. STS-32R stand for?