How does a spacecraft navigate along and jump between constant v-inf lines depicted in Tisserand graphs?

Below is an example Tisserand graph showing interplanetary trajectories (in bold black).

The first one represents a trajectory from Earth till the Mercury system. In the second one, the spacecraft instead switches to the a path that increases the energy of the spacecraft upon its return to Earth from a Venus flyby (so that it can go on to Jupiter, for example).

This graph is from "Lunar and Interplanetary Trajectories" by Robin Biesbroek (Springer, 2015).

Each line represents a paths of constant v-infinity computed via Tisserand's criterion. Along a path, perihelion and period vary, but the v-inf remains constant. The graph assumes that the orbits are coplanar. 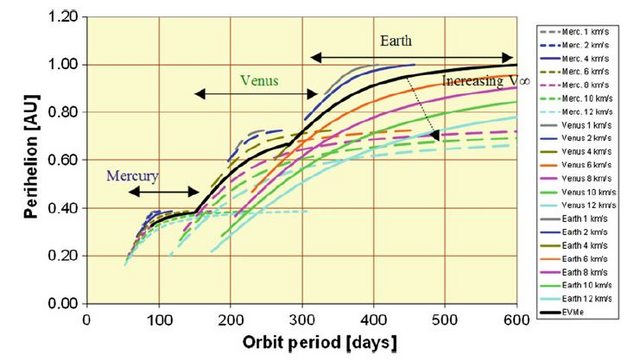 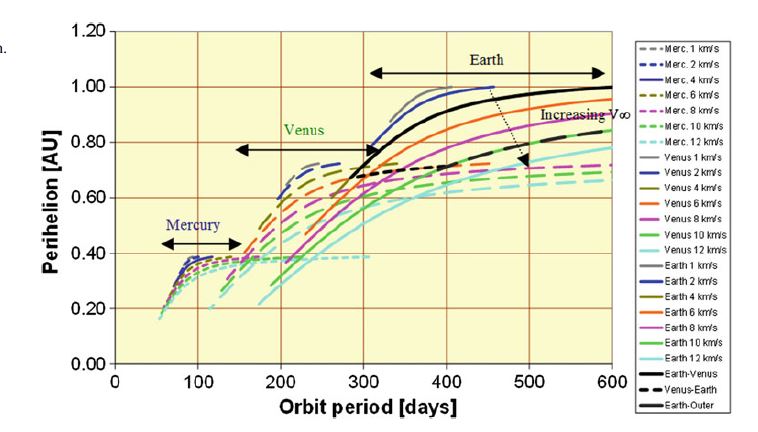 I am a bit confused regarding how this actually works out for the spacecraft:

Thank you for posting this interesting question. I learned a little more about navigation than I new before. This Paper from Purdue talks about the method in a little more detail. Although one can graphically follow a set of curves to identify that there is a path at a certain energy level (V-infinity) that takes one from one gravity assist to another, it is still necessary to target your departure time and direction so that the spacecraft will travel from one body to the next.

Once you identify graphically that there is a path of interest, say one that goes from Venus to Earth then to Mars at 3 km/s, this data is input to a path finding program like STOUR (a satellite tour design program originally from JPL and modified by Purdue). This tool determines the time of Earth departure and the departure vector that fits the V infinity and rendezvous constraints so solve the problem.

These programs typically work with some sort of guess and propagate technique. They try an approximate solution, see where it ends up, and then they vary the input slightly and see where that ends up, then repeat until they home in on the initial conditions that set up the desired parameters.

Not the answer you're looking for? Browse other questions tagged interplanetary flyby or ask your own question.

23
Is there any limit to how many times you can increase velocity by repeated sling shot manoeuvres?

11
3-Body Simulation and Accuracy of Lambert Interplanetary Solver
6
Cassini flyby through Enceladus plume - How risky is that for the spacecraft and its instruments?
25
Assuming a spacecraft is traveling in a constant rate and our Astronaut will exit it to a space walk, will she be "left behind" by the spacecraft?
1
How does the speed and volume of particles differ in producing thrust in space?