Why are all possibly habitable exoplanets higher mass than Earth?

I have been writing a scifi book in which I wanted to include real stars and planets as locations. It was simple enough to find a chart on Wikipedia that lists possibly habitable exoplanets, but I quickly noticed that every single one has a greater mass than Earth, with the exception of the planets around TRAPPIST-1. The main reason this caught my attention was that I wanted to calculate the gravity on each planet as obviously that should have a pretty significant affect on whether or not we can colonize it. It would be terribly disappointing if we manage to master interstellar travel only to have every other habitable planet crush us with its gravity.

Is it just a weird correlation, or is there actually some aspect of how we estimate the mass of exoplanets that is likely to cause higher estimations?

Link to the Wikipedia page that includes the chart HERE.

There is a nice Wikipedia article about the transit method for finding exoplanets by detection of the light intensity drop caused by the planet when passing before its central star. Unfortunately this article is available in german but not in english language.

If we take the perspective of an alien astronomer searching for explanets around a star of the Milky Way, our Sun, we can do some calculations using the diameters of the planets and the Sun.

The probability for viewing from the proper direction to measure a passage of a planet before the star is: 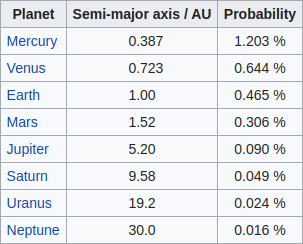 The probability is higher for planets close to the sun.

The light intensity drop is: 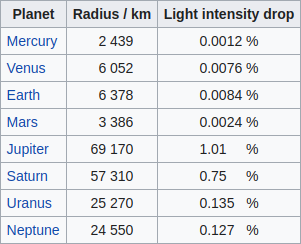 The light intensity drop is higher for big planets.

To detect Earth instead of Jupiter you need more than 100 times more resolution for light intensity drop measurement. But light intensity of our Sun is not constant, it is influenced by Sunspots, stars do have starspots too. You have to distinguish starspots from planetary transits by different timing. Starspot activity may hide a transit, especially in periods of high spot activity.

All tables from the Wikipedia article.

Not the answer you're looking for? Browse other questions tagged gravity colonization mass exoplanet or ask your own question.

1
Are exoplanets in the habitable zone suitable for human colonization?
14
Why are rocket mass on the launch pad and payload mass to LEO not strongly correlated?
3
Why are the Trojan libration points equidistant and not mass weighted?
0
Are any of the planets in our solar system (other than Earth) inhabitable?