When was the first successful photograph of an orbital spacecraft from Earth taken?

Early artificial satellites were tracked by radio and visually by amateurs, scientists and military personnel for various reasons including fun and improving the understanding of orbital dynamics including Earth's oblateness or J2 and atmospheric drag.

Question: When was the first successful photograph of an orbital spacecraft from Earth taken? What was the photographed spacecraft, and who (or at least which organization if any) took it?

An example of an early photograph of a spacecraft from Earth is given below, but I don't know if this is the first.

This question was inspired by the segment in the vintage video "SCIENCE IN SPACE" EARLY 1960s SPACE EXPLORATION FILM SPUTNIK & EXPLORER VANGUARD ROCKET 12494 linked below, from the Periscope Film collection, from 12:06 to 14:16.

Some of them can be seen by the naked eye or with binoculars, but only around twilight. However scientists have developed systems far more powerful and precise than the eye to follow space laboratories and to communicate with them.

Special radio devices track a satellite by measuring the direction from which its radio signals come. From successive angles of direction the satellite’s orbit can be computed. Amateur radio operators also pick up and report the satellite signals. Radio tracking networks stretch around the world.

Another international network consists of optical observation stations, manned by volunteer teams engaged in Operation Moon Watch. Using Telescopes, these observers are especially helpful in finding a newly-launched satellite, and in following a dying satellite in its final variable course. Each observer is assigned his own sector of sky. Upon sighting the satellite, the observer such as this member of a Philippine team calls out; “In. Time. Out.”

A series of Moon watch reports coordinated with a recorded time signal helps in plotting the path of the satellite. Photographed by a Moon watch observer in Schenectady New York, this actual fast motion shot shows the tumbling third stage rocket of Sputnik 1 crossing the sky in front of the Moon. 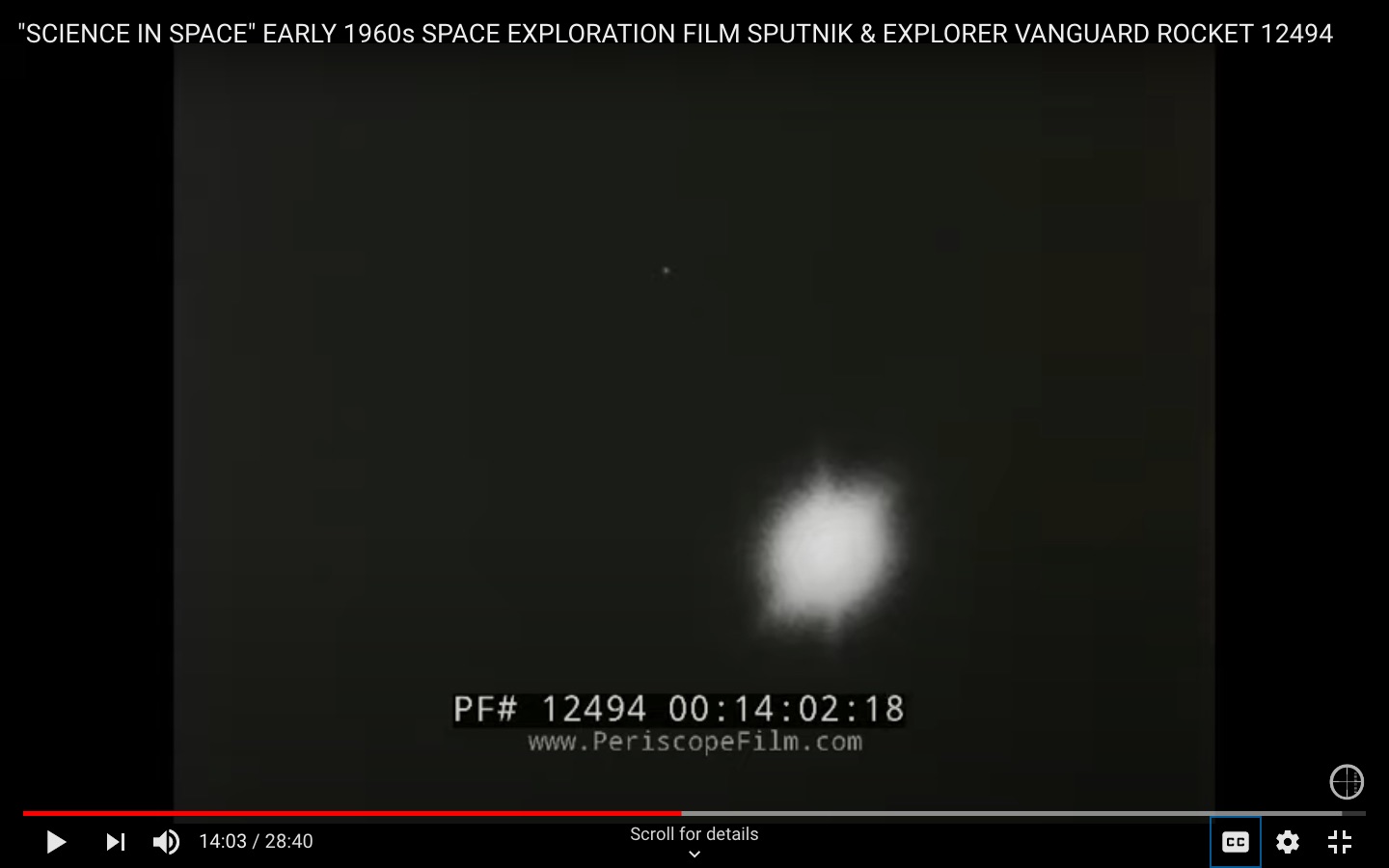 36
Did Sputnik 1 tell us more than "beep"? What science was improved by information gained from its orbiting the Earth?
2
How long was Sputnik 1's second stage rocket body in orbit? Are there TLEs for it?

29
What did the sky actually look like from the Moon?
16
Two week mark; has Mayak (Маяк) been spotted yet? Reflector deployed? Astronomy "ruined"?
2
Which mission delivered the first ever complete photograph of the Earth?
2
Why were the antennas on the spherical surface of some early satellites spiral-shaped?
2
Better source for the 1967 photograph of Surveyor-1 by Lunar Orbiter-3?
36
Did Sputnik 1 tell us more than "beep"? What science was improved by information gained from its orbiting the Earth?
28
Would it have been possible to launch rockets in secret in the 1960s?
1
When was advertising on Earth from space first proposed? By who?