Could the crashed Mars Express lander be imaged by the MRO orbiter?

The Mars Reconnaissance Orbiter has taken direct images of the MSL Curiosity rover, its parachute, heat shield and sky crane. Could it image, or has it even already, the failed Mars Express lander with its Beagle 2 rover? If it can't, then for what reason? Would such an image be likely to give clues to why it failed?

Maybe. A search of University of Arizona's HiRISE catalog reveals 22 images, most captioned 'Search for Beagle 2.' Page 2 of the search leads us to the following image: Portion of Beagle 2 Landing Ellipse in Isidis Planitia cut b: 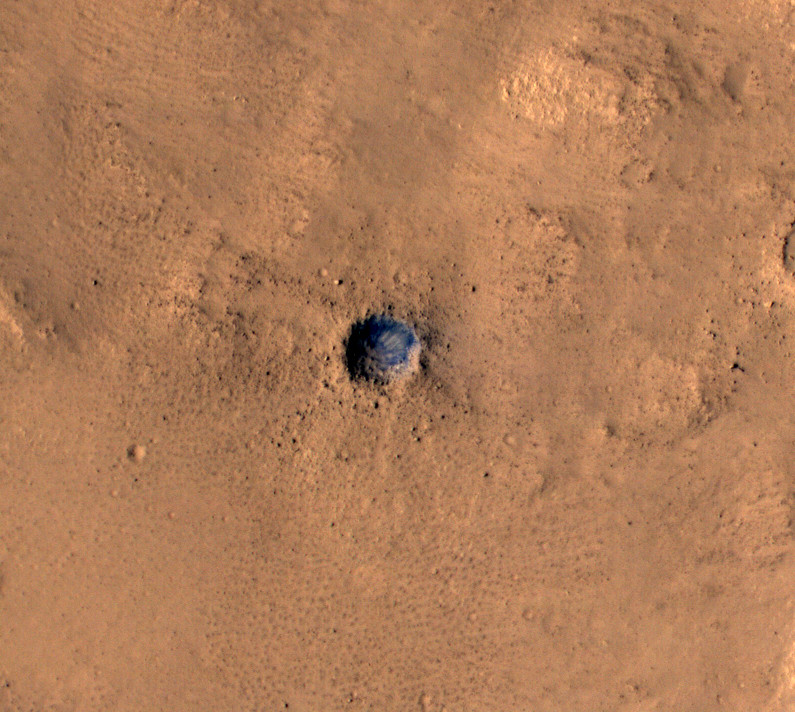 Or maybe not: see David's comment below. From the Wikipedia article:

On 20 December 2005, Professor Pillinger released specially processed images from the Mars Global Surveyor which suggested that Beagle 2 came down in a crater at the landing site on Isidis Planitia.(4) It was claimed that the blurry images show the primary impact site as a dark patch and, a short distance away, Beagle 2 surrounded by the deflated airbags and with its solar panels extended.(5) 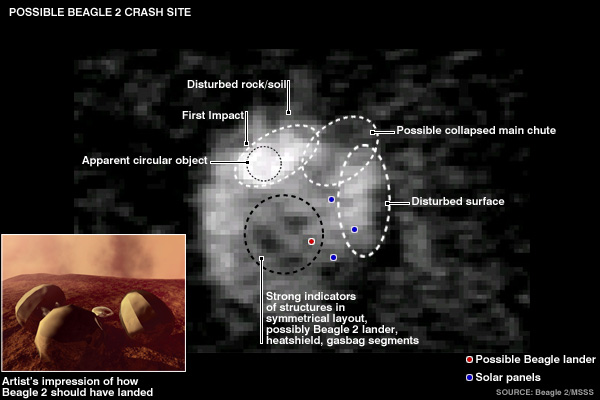 However, Mars Reconnaissance Orbiter's HiRISE camera subsequently observed the area, in February 2007, and revealed that the crater was empty.(6)

EDIT: According to this January 16th JPL article, MRO has finally located the Beagle2.

A set of three observations with the orbiter's High Resolution Imaging Science Experiment (HiRISE) camera shows Beagle 2 partially deployed on the surface of the planet, ending the mystery of what happened to the mission more than a decade ago. They show that the lander survived its Dec. 25, 2003, touchdown enough to at least partially deploy its solar arrays. 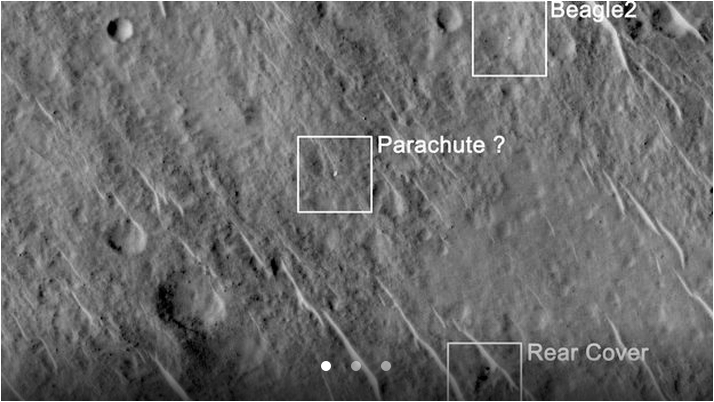 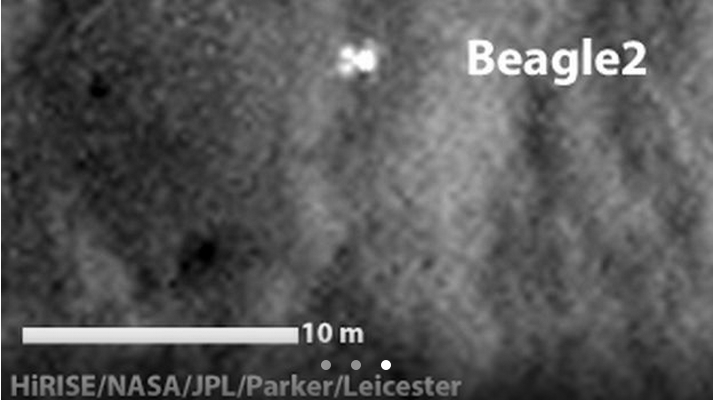 Subsequent re-imaging and analysis by the Beagle 2 team, the HiRISE team and NASA's Jet Propulsion Laboratory, Pasadena, California, have confirmed that the targets discovered are of the correct size, shape, color and dispersion to be Beagle 2. JPL planetary geologist Tim Parker, who has assisted in the search and processed some of the images said, "I've been looking over the objects in the images carefully, and I'm convinced that these are Beagle 2 hardware."

Analysis of the images indicates what appears to be a partially deployed configuration, with what is thought to be the rear cover with its pilot/drogue chute (still attached) and main parachute close by. Due to the small size of Beagle 2 (less than 7 feet, or 2 meters across for the deployed lander) it is right at the limit of detection of HiRISE, the highest-resolution camera orbiting Mars. The targets are within the expected landing area at a distance of about three miles (five kilometers) from its center.

The reason why HiRISE (The camera on MRO that took the images mentioned) was able to take those pictures is that it knew exactly where the object landed. It has in fact attempted to find the Beagle 2 rover, which is a difficult task. There's an excellent article on the attempt on the HiRISE website. Depending on exactly what happened, different things might be seen, letting one know exactly where in the EDL process the lander failed. However, finding it is quite difficult, without knowing where to look for it.

2
What was the effective magnification of the Mars Reconnaissance Orbiter's HiRISE camera to acquire the detailed image of Earth?

9
Any news about the Mars-3 landing site since early 2013?
15
Does the Curiosity rover really have a chance of driving to the top of Mt. Sharp?
6
Is it possible for Curiosity to broadcast live HD television from Mars to Earth?
6
Why is Curiosity remaining on the Vera Rubin Ridge for so long?
5
Why are the gaps in MRO global images of mars so irregular and sometimes filled in?
4
Has the Curiosity rover ever communicated directly with Earth via its high-gain antenna? Signal strength & data rate?
2
How many hours each day is Mars reachable by 2 of the 3 DSN complexes?
4
Did any lander or rover photograph the sun rising or setting during a Martian dust storm?
6
Why did MRO have to "both pitch upward and roll hard to the left" to point exactly at Perseverance during the entry, descent and landing phase?
2
What were Mars 2's conical aerodynamic braking shield and "gunpowder" engines?