How close to a building has a Soyuz landed?

Soyuz capsules are designed to land onto land. To avoid the small chance of harming people or property, they are usually targeted to land in remote parts of Kazakhstan. However, some landings aren't perfectly on target (see this question and this answer), and Kazakhstan is not completely empty.

What is the record for the closest that a Soyuz capsule has come to hitting a building? If pictures are available, please add them to your answer.

Nothing is quite like spending the evening looking at blurry satellite photos of Kazakhstan. The landing area of Soyuz TM-26 had a relatively crowded landing area, with several probable buildings close to it: 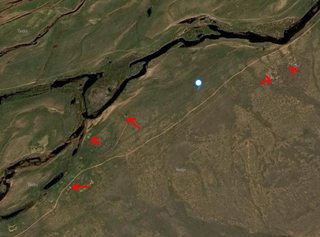 Wikipedia has the landing coordinates in two-digit decimal degrees, which gives a north-south accuracy of about 1km, and a slightly better east-west resolution. The likely source, however, spacefacts.de, has it in degrees and minutes, which has a slightly worse resolution.

Taking those accuracy problems into account, the flight most likely landed within 1 km of a building.

Not the answer you're looking for? Browse other questions tagged landing soyuz-spacecraft russia soviet-union or ask your own question.

18
Is there a risk that re-entering capsules or other components will hit ships or islands?
19
Why do Soyuz landings seem to be overshot?
12
Could a Soyuz land in water?
12
How does the landing accuracy of Dragon (under parachutes) compare to Soyuz?

9
Why do the Russians call the Soyuz launcher the same name as the Soyuz capsule?
16
How similar are Soyuz and Progress?
11
Flashing lights on soyuz underside?
7
Soyuz has a Space Periscope?
4
Landing shock of Soyuz spacecraft?
5
Does deploying the parachute dehermetize Soyuz?
2
Is this window zenith-facing? (ISS docked Soyuz) If so, how directly?
2
Why were there two Soyuz 39?
6
Docking orientation of Soyuz 4 and 5
9
Soyuz for Sale?