How does gravity vary in a gas giant's interior?

The Earth's gravitational pull in its interior looks like this: 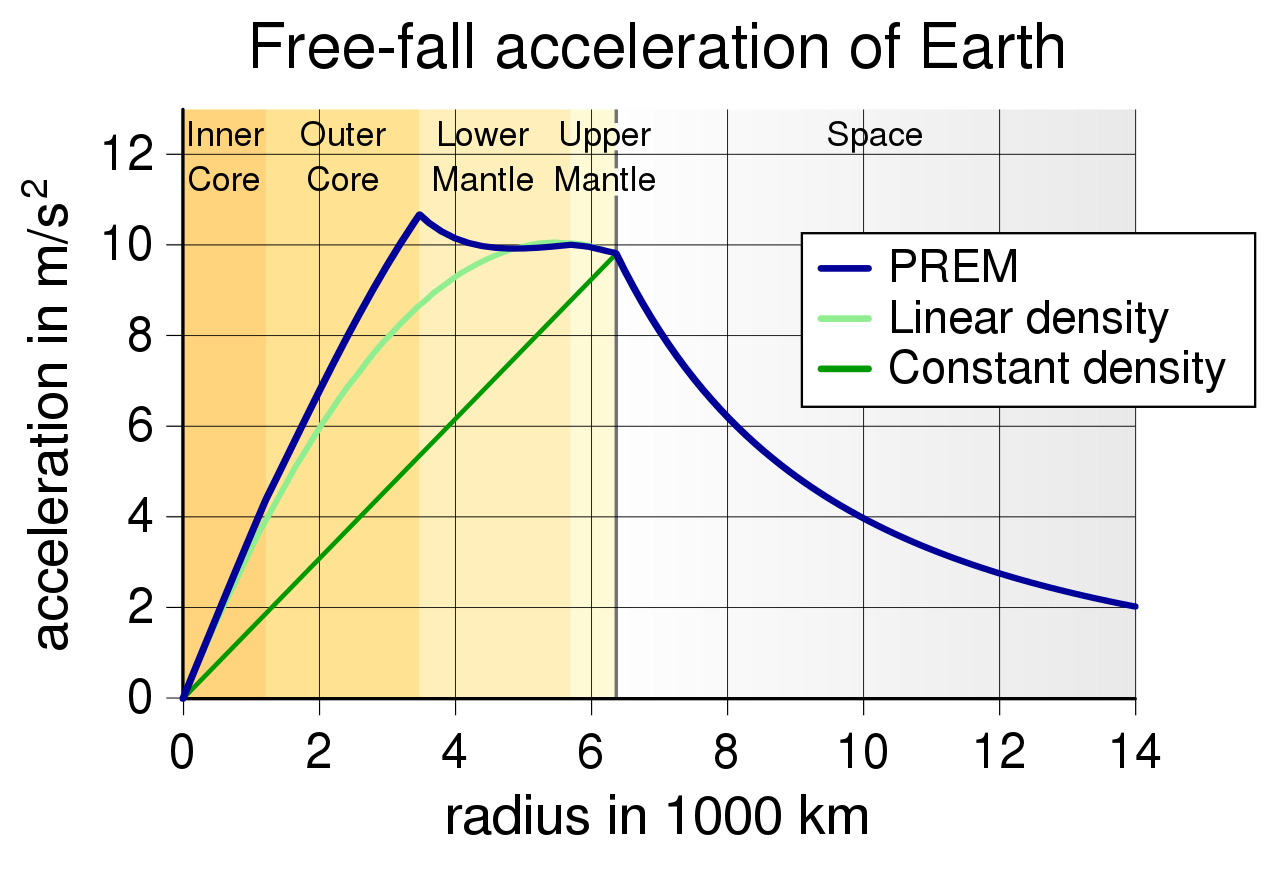 The pull remains about the same and increases even a bit till the outer core from where on it starts getting weaker till 0g in the core's very center. My question is what such a model looks like in a gas giant.

The four gaseous planets don't have solid surfaces (except for their unreachable cores perhaps) and therefore may be explored by airborne craft, including crewed airships and someday maybe cloud cities. Such a crewed airship plan is the HAVOC for Venus. The airship would float at about 33 mi (53 km) above the equator where the gravity is 8.73 m/s² or 0.89g compared to the 0.905g on the surface.

I'll make a simplifying assumptions that the giant planets are very close to spherical and that the density inside these planets depends only on radial distance from the center of the planet. (This is not quite correct as the giant planets rotate rather quickly, making the planets oblate spheroids rather than spheres. But the differences are small.)

The sign of the term $\rho(r) - \frac23 \bar{\rho}(r)$ dictates whether gravitation inside a planet is locally increasing or decreasing. In rocky planets with a dense metallic core surrounded by a less dense rocky mantle, the marked density transition at the core-mantle boundary makes $dg/dr$ change from positive to negative at that boundary. In the Earth, the core-mantle boundary is the place where gravitation reaches its maximum.

Somewhere in between there exists a global maximum, and its beyond ludicrous to think that this magically occurs at the one bar level that we have arbitrarily defined as the "surface". It almost certainly occurs well below the one bar level as the density is rather low at that level, much less than the average density of the giant planets (which is on the order of density of liquid water).

That's a tricky question, if you want to go into enough detail.

Generally, the gas giants consist mostly of gas, and you can derive the density and thus gravity if you know the equation of state of the gas (that's the tricky bit). A random treatise on the exploration of Saturn's internal structure based on gravity data could be this article as found in ArXiv. You will need to derive the radius-dependent gravitational acceleration from the density-radius relation.

As to your last paragraph... that's totally unrelated in my eyes... however the scale height of Neptunes atmosphere is about 20km. The scale height is the length at which the pressure reduces to about 37% when comparing bottom and top of the column.

However the top of the atmosphere is usually defined at around 1 bar pressure or an opacity of $\tau \approx 1$ ... that's not a place you will want to place anything long-term unless you want to spend insane amounts of energy just to keep your place in orbit.

Not the answer you're looking for? Browse other questions tagged gravity balloons gas-giant or ask your own question.

8
Why does lunar gravity decrease?
15
Is it more challenging to put an airship in the Uranian than in the Venusian atmosphere?
8
Is there any plan to send balloon like probes to gas giants to explore interior of gas giants?
15
How does a space probe maintain its trajectory while passing through the extreme gravitational field of the gas giants of our solar system?
3
How do we determine the internal composition of gas giants?
4
Is Earth's "pear shape" mostly J₃?
1
Does gravity affect sweating?
7
How deep could a gas giant communications network penetrate?
5
How does gravity change beyond L2?