What is the maximum apogee a Dragon spacecraft can reach?

What is the maximum apogee a Crew Dragon can reach in a highly elliptical orbit (by both the Falcon 9 and the Falcon Heavy)? There is a planned touristic mission in which the current apogee record of 1,368 km (788 mi) set by Gemini 11 is to be broken.

Crew Dragon with Falcon Heavy can theoretically be sent to a lunar free return trajectory, so pretty much any apogee could be done. As for just a Falcon 9, it's hard to know for certain. Putting in a desired orbit of 2000 km with the NASA Performance Vehicle Calculator, I got the following plots. Note that 9000 km is the launch mass of Crew Dragon. 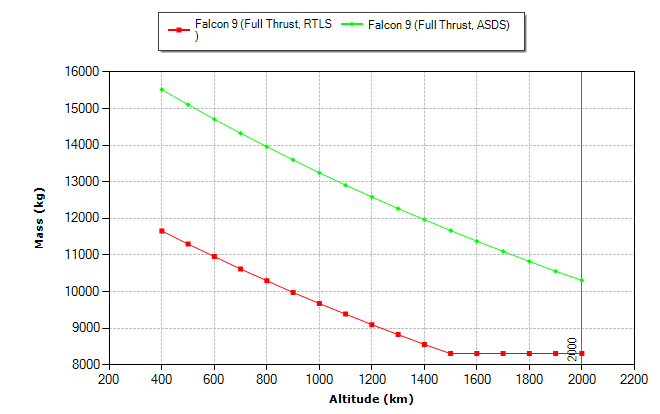 The problem is that the flight profile for a human rated spacecraft has the potential to interfere with this. I'm going to make the assumption that if you can do a RTLS, you can do a human rated trajectory with a drone ship landing. The real answer is probably somewhere between the lines.

So I'm going to guess they can set the record, but probably not by a huge margin. Definately less than 2000 km, probably around the 1400-1700 km range.

Not the answer you're looking for? Browse other questions tagged falcon-9 falcon-heavy orbital-elements dragon-v2 or ask your own question.

12
What limits how long spacecrafts like Orion, Dragon, Starliner can support their crews' lives?
14
Why can Falcon Heavy bring 4.2 times as much mass to Mars than F9, but only 2.7 times as much to LEO?
6
Can someone explain to me what will cause Starman’s orbit to change to match the orbit that has been posted?
33
What is the primary reason for SpaceX motion to have astronauts board Dragon before fueling up the rocket?
7
What is the orbit and expected lifetime of Crew Dragon trunk?
1
Were/Are the Space Shuttle or the Falcon 9 Dragon capable of achieving an elliptical orbit on whose apogee you'd see the entire Earth?
4
What is the maximum apogee a Space Shuttle could have reached?