On earth, blankets serve to primarily buffer temperature changes / heat transfer that would occur via convection (e.g. a blanket traps air near you so that after your body warms it, it doesn't just get blown away and replaced with cooler air), and conduction (e.g. if you're lying on ice, a blanket between you and the ice with poor thermal conductivity will slow the rate of conductive heat transfer).

In the case of a free-floating spacecraft in the vacuum of space, convection and conduction don't exist, and temperature / heat transfer are dominated by incoming radiation (from the sun) and outgoing radiation (radiative black-body cooling from the spacecraft, if I'm using that term correctly). (To be clear, conduction does exist in space between objects that are in physical contact, but I'm talking about heat transfer through the surface of free-floating objects for the purpose of this question).

In addition to what @PearsonArtPhoto said about the reflectivity, the large number of layers plays an important role in being effective radiative insulation.

To oversimplify somewhat, besides just straight reflection, the absorption and reradiation of heat helps to a large extent. In general, a large amount of heat energy comes in from one side. That energy heats up the first layer, which radiates heat itself according to its own temperature, but it does so in both directions more or less equally, which, give or take, cuts in half the amount of heat going toward the cold side. Repeat this over 40 layers, and it adds up substantially. Add that on top of the reflectivity of the individual layers as well, and you have remarkably effective insulation.

They tend to be a combination of a highly reflective material, aluminized mylar usually, with a thin mesh in between the layers. The goal is to reflect as much light as possible (specifically those wavelengths emitted by objects at human-body temperature), and keep direct contact between elements to a minimum. Wikipedia has a great picture, shown below. 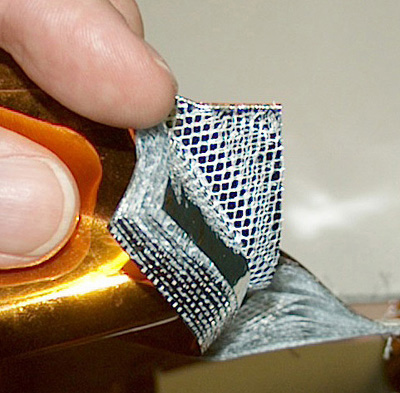 Not the answer you're looking for? Browse other questions tagged spacecraft temperature thermal heat or ask your own question.

3
How close are Zeeman slowers to being useful for general cooling in space?
4
Could IR space telescopes and other very cold devices use Zeeman slowers effectively in the near term?
13
How cold is the Martian sky at night? Or the day for that matter?
2
How are the Titan Transtage's tanks protected from its engine?
4
How do you find the temperature of an orbiting aluminum sheet 10x10 cm
6
Why is the Heat Shield of ESA's Solar Orbiter Black in colour?
2
How do phonesats stay cool?
2
When does a specific equipment at a certain temperature start to freeze in interstellar space?
4
How does a radiator work fast enough on a space craft?