Did Apollo 11 climb vertically upwards i.e. radially outwards, or "normal" to earth surface till it separated its first stage (approximately 38 Miles/60 Km or so..), or did it tilt at or before that altitude?

This plot shows the pitch profile for a Saturn V from launch to Earth Parking Orbit and it's described like this:

The vehicle rises nearly vertically from the pad, for approximately 450 feet, to clear the tower. During this period, a yaw maneuver is executed to provide tower clearance in the event of adverse wind conditions, deviation from nominal flight and/or engine failure.

(See figure 2-1 for start and stop times for this and other maneuvers and events).

After clearing the tower, a tilt and roll maneuver is initiated to achieve the flight attitude and proper orientation for the selected flight azimuth. Launch azimuth is 90 degrees; flight azimuth may vary between 72 and 108 degrees. The actual flight azimuth within this range is computed just prior to launch from a launch-day-dependent polynomial of launch azimuth as a function of launch time. From the end of the tilt maneuver to tilt-arrest, the pitch program provides a near-zero-lift trajectory that satisfies vehicle performance, heating and loads requirements. Tilt-arrest freezes the pitch attitude to dampen out pitch rates prior to S-IC/S-II separation. The pitch attitude remains constant until initiation of the Iterative Guidance Mode (IGM) which occurs during the S-II stage flight. 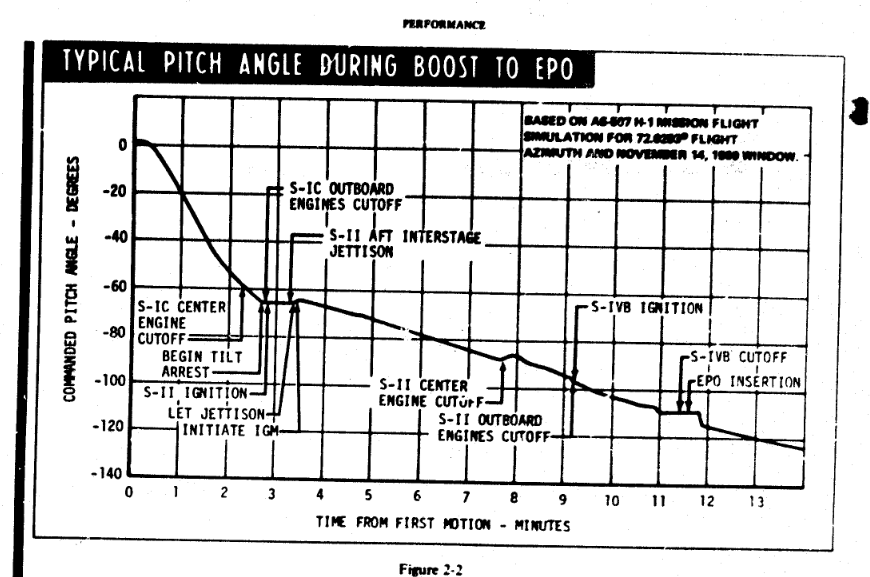 .. the first figure gives you the best indication of those pitches, on page 2-4, which looks like basically from 90° to 30° for the duration of the first stage burn. Then it appears to hold that pitch for 30-45 seconds while the second stage ignited and then the interstage was jettisoned. From there, looks like it pitched down at a pretty regular rate and hit about 0° by the time the second stage burnt out. Then it looks like during the third stage to achieve parking orbit it burnt at a negative pitch to maintain apogee while raising perigee to the right altitude.

from here, emphasis mine

Not the answer you're looking for? Browse other questions tagged apollo-11 launch-trajectories or ask your own question.

6
Any potential downside to throwing personal life support out the door on the Moon?
1
Length of shadows apollo 11
4
What are the orbital-mechanical advantages of a long (100+ second) sub-orbital coast phase?
5
Does landing a Falcon 9 first stage affect the allowable launch azimuths?
11
What was the temperature of the Apollo 11 moon landing zone?
8
Apollo-11 delta-v "due to residual pressure in the docking tunnel pushing the spacecraft apart" detected as it happened? Was it corrected?
13
Did the 1202 error and associated reboot prevent disaster on Apollo 11 landing?
9
Could the ascent stage of Apollo 11's Eagle still orbit the Moon?