Can humans live in something like the ISS around gas giants?

Beside solar winds and cosmic rays, would they need some form of shielding from whatever deadly comes from these planets ?

And about this potentially deadly stuff coming from the planets, what would it be ?

Radiations only or something else as well ?

This is a pretty broad questions, as it would depend on which gas giant you have in mind. Excluding Uranus and Neptune as ice giants, this leaves us with Jupiter and Saturn in our own Solar system, and they're still hard to directly compare in terms of how hazardous environment they'd represent to an orbiting space station. But they have one deadly thing in common:

To reach them from the Earth requires years long travel through deep space. As far as manned missions to space are concerned, we haven't done anything quite like it yet. Those Apollo visits of the Moon in the late 60's and early 70's were days long short-duration excursions in comparison, so first thing we'd have to figure out is how to protect astronauts from deadly exposure to Solar wind and cosmic rays, and avoid Solar charged particles flux of Coronal Mass Ejections (CMEs) for the duration of the round trip and their stay at one of the gas giant orbits.

Jupiter's magnetosphere is also the second largest and strongest structure in the Solar system. Its magnetic field can accelerate electrically charged particles to immense speeds. Their effect can be observed at Jupiter's poles as polar auroras, where they interact with its upper atmosphere and create brilliantly blue circle areas of ionized gases, many times the Earth in size. These magnetically accelerated particles mostly come off one of it's moons - Io and its volcanic activity. They can be the size of dust particles and cause significant damage on impact with the craft's shielding, especially as the time goes by and the damage accumulates, to barely noticeable but in time deadly nonetheless nano-scale particles and ions (charged particle radiation) that can rip through living tissues and cause tissue scarring, genetic defects, and worse. 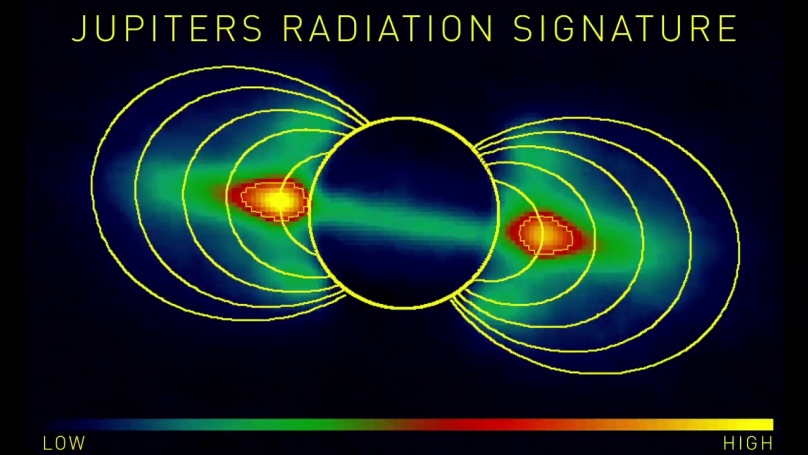 Synchrotron Emission observations of Jupiter by the radio telescopes of the Very Large Array (source: SwRI on mission JUNO)

Polar regions are also where the Jupiter magnetically reconnects with the Sun's magnetosphere, so they present a double danger of both charged particles from the Solar winds as well as those accelerated by the Jupiter's own magnetosphere. So there really isn't any orbit around Jupiter that could be considered nearly as safe as Low Earth Orbit (LEO) of the International Space Station (ISS), that is still well within the Earth's magnetosphere and Van Allen radiation belts, with an exception of the South Atlantic Anomaly that the station still passes through during some of its Earth orbits and for perhaps up to 10 minutes or less at the time (its orbit is ~ 92 minutes long).

And there are other potential problems, such as Jupiter's emissions in the radio frequencies interfering with communications equipment, electrically charged plasma damaging other sensitive electronic parts, and otherwise putting your Jupiter orbiting mission in jeopardy. The list of ways the universe can kill us is infinite, the list of ways to protect ourselves from those dangers, sadly, isn't.

The ISS and stations like it are not "benign environments" - that is, they are life sustaining, but not safe for long term habitation on the order of years. They lose air, they admit both EM and particulate radiation, and are only minimally protected from magnetic induction.

The NASA lifetime space exposure limit is under 5 Seiverts (Sv), with a per year limit of 0.5 Sv. Apollo 14 hit 0.014 Sv in 9 days - a rate above the annual threshold. Certain space events should be able to generate 0.01 Sv per day, even through the ISS type station's walls. (Radiation bunkerage has been proposed for such situations; the launch costs are prohibitive.)

Jupiter and Saturn both are, themselves, radiation sources. Their radiation belts are also in the orbital regimes - a factor that's had to be designed for in NASA's probes.

The radiation that needs to be shielded against includes some gamma, some X, Cosmic and Solar Wind, the extensive IR emissions, some radio waves, the relatively dense microbody environments, the incredibly intense magnetic fields (and their potential induced current).

Not the answer you're looking for? Browse other questions tagged orbit life humans gas-giant or ask your own question.

10
Are there any experiments in progress designed to explore the interiors of gas giants like Jupiter or Saturn?
7
Could a biohazard sample return capsule from Mars be safely hard landed on Earth?
2
Calculate Low/High/Geo orbits for other planets? - math lite - gamedev
8
Is there any plan to send balloon like probes to gas giants to explore interior of gas giants?
8
Does it even make sense to talk about Mercury's triangular libration points (L4, L5)?
3
How do we determine the internal composition of gas giants?
3
How to identify an object in orbit last night?