In designing the Apollo capsule, was consideration given to lashing it down?

At https://history.nasa.gov/afj/ap11fj/cm-107_graffiti.html, there is a picture of

So, after splash-down, the capsule was taken aboard the recovery ship, which then set sail back to land. On the way, it might encounter rough seas or storms, so the capsule would have been lashed down to the deck.

Was any special consideration to this given in the design of the capsule? Did it have specific tie-down points? Or did the swabbies simply loop lines through whatever seemed convenient at the time?

As already mention, the USS Hornet as an Aircraft Carrier had plenty of room in its hangar deck.

Here on the picture shown, you can see how the command module was lashed on a special construction and how the crews quarataine was established ... 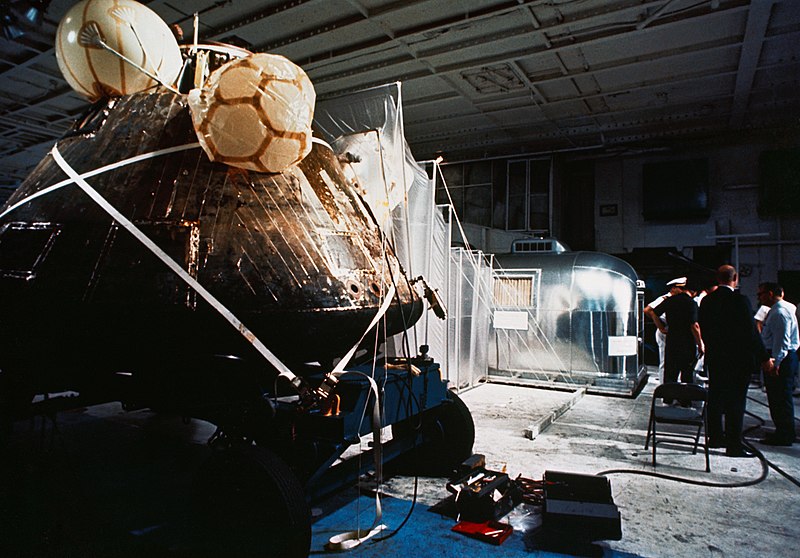 From a NASA page:

The recovery helicopter one by one retrieved the three astronauts from the raft using a Billy Pugh net, first Armstrong, then Collins and finally Aldrin. NASA flight surgeon Dr. William R. Carpentier was aboard the helicopter and gave them a brief medical evaluation. The helicopter flew to the Hornet, landing on its deck 63 minutes after splashdown. From there, sailors placed it on an elevator, took it below decks, and towed it toward the reception area near the prime Mobile Quarantine Facility (MQF) – a second MQF was held in reserve in case problems arose with the first, or in case any of the ship’s crew was inadvertently exposed to the astronauts or spacecraft. The three astronauts, Collins first, followed by Armstrong, Aldrin, and Dr. Carpentier, walked the ten steps from the helicopter to the MQF, amid the cheers of Hornet’s crew and assembled media. NASA engineer John K. Hirasaki was waiting inside the MQF and filmed the astronauts entering. The five of them remained inside the MQF until their arrival at the Lunar Receiving Laboratory (LRL) at the Manned Spacecraft Center (MSC), now the Johnson Space Center in Houston, two days later.

The recovery ship USS Hornet had elevators for the aircrafts and helicopters. So the Apollo CM could be moved under deck using the elevator to store the CM protected against rough seas or storms and high waves. The parachute mounting points could be used for tie down of the CM. 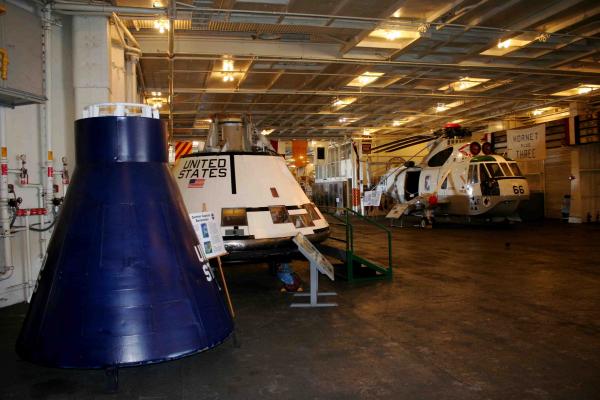 Image from this page showing mockups of the capsules on board of the USS Hornet museum ship. So the hangar decks offered enough room to store a small CM and to protect it from rough weather on the flight deck. 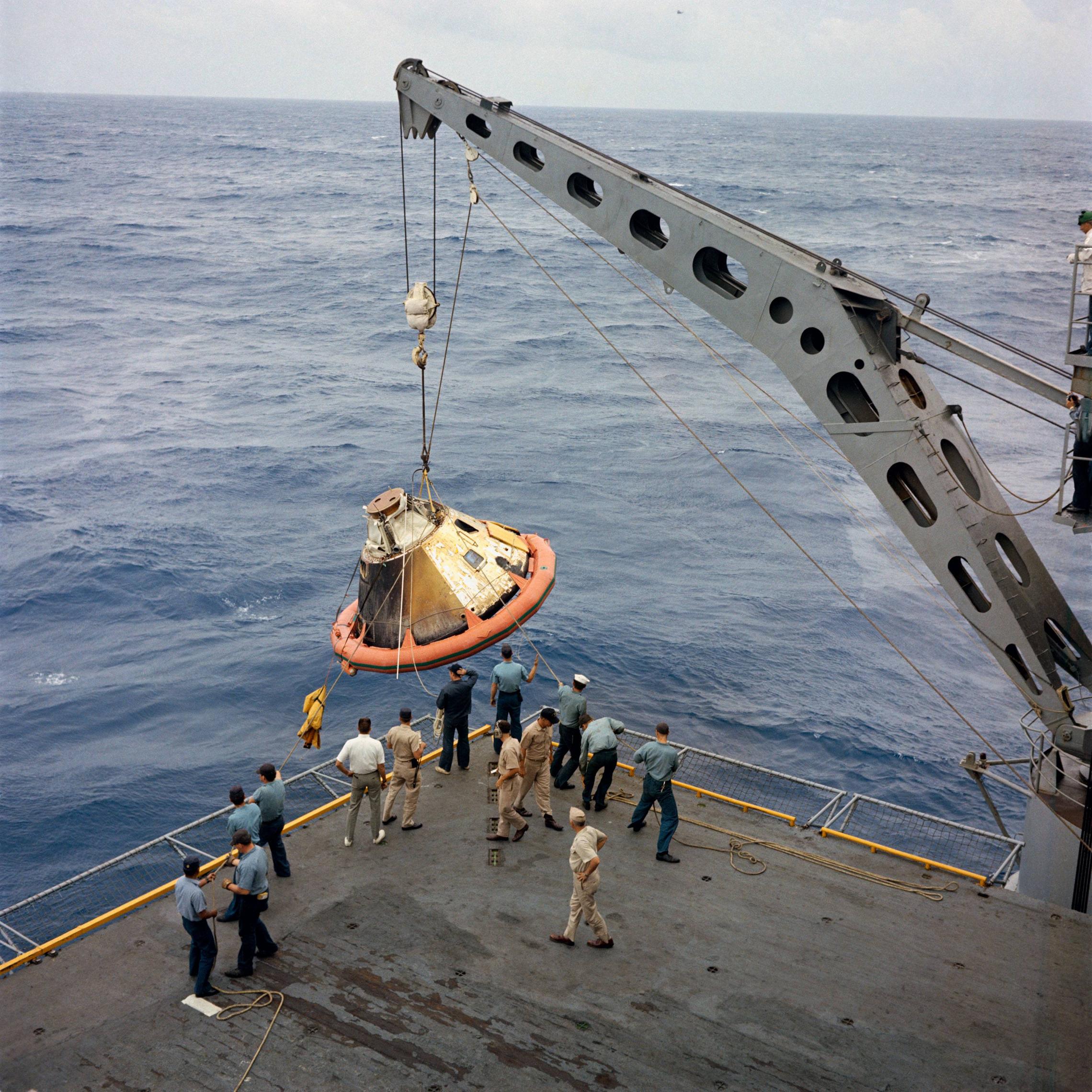 The attachment points used for crane transport could also be used for lashing it down to the hangar deck.

Image from this page.

Not the answer you're looking for? Browse other questions tagged apollo-program recovery capsule or ask your own question.

4
Where did the floatation collar and sea anchor attach to the command module?

7
What was the preferred method of holding things down in Apollo?
25
Was the Apollo 13 CM guidance computer fully shut down?
1
Is the Shenzhou-11 crew's capsule just launched windowless?
2
Roughly what is the rate of energy loss of survivable capsule re-entries?
11
Was splashing down on the USSR-controlled territory a possibility for Apollo missions?
7
What was this capsule dropped from a truck?
9
Did Apollo 13 CM reach thermal equilibrium when it was powered down?
2
What would be the cost of construction of space capsule (re- entry modules)
17
Why did the Apollo capsule have seats if the astronauts never were sitting in it?
8
Why is the Hayabusa2 capsule collection team in protective gear