Were the "frogmen" who performed ocean recovery Navy SEALs?

The ocean landings of Mercury, Gemini, and Apollo were assisted by "frogmen" rescue divers. They were dropped from helicopters to assist with the recovery of the crew and capsule.

The U.S. Navy SEALs were created in 1962, during the middle of the Mercury flights. After that time, were some or all of the rescue divers for NASA flights members of the Navy SEALs?

Before the Navy Seals there were the Underwater Demolition Teams (UDT). They assisted the recovery of the space capsules.

The Underwater Demolition Teams (UDT) were a special-purpose force established by the United States Navy during World War II. They came to be considered more elite and tactical during the Korean and Vietnam Wars. Their primary WWII function began with the reconnaissance and removal of natural or man-made obstacles on beaches prior to amphibious landings. They later were assigned to assist in the recovery of space capsules and astronauts after splash down in the Mercury and Apollo space flight programs. The United States Navy's Underwater Demolition Teams were pioneers in underwater demolition, closed-circuit diving, combat swimming, and midget submarine (dry and wet submersible) operations. Commando training was added making them the forerunner to the United States Navy SEAL program that exists today.

The Navy moved forward to establish its new special operations force and in January 1962 commissioned SEAL Team ONE in NAB Coronado and SEAL Team TWO at NAB Little Creek. UDT-11 & 12 were still active on the west coast and UDT-21 & 22 on the east coast. The SEALs quickly earned a reputation for valor and stealth in Vietnam, where they conducted clandestine raids in perilous territory. In May 1983, the remaining UDT teams were reorganized as SEAL teams. UDT 11 became SEAL Team Five and UDT 12 became Seal Delivery Vehicle Team One. UDT 21 became SEAL Team Four and UDT 22 became Seal Delivery Vehicle Team Two. A new team, SEAL Team Three was established in October 1983.

So UDT and Navy Seals both existed between 1962 and 1983. I guess they did not want to replace a trained and experienced successful recovery team by another one without experience. 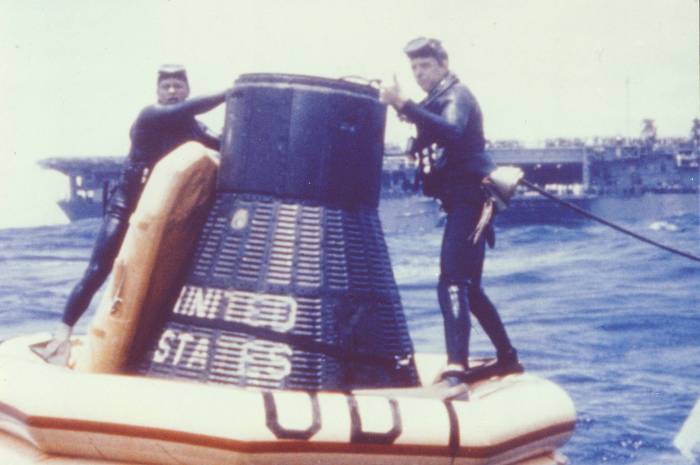 Note the letters UDT on the flotation collar around Mercury 7.

Image from a navy frogmen page.

Not the answer you're looking for? Browse other questions tagged nasa military recovery or ask your own question.

16
Were there any CAPCOMs who were not astronauts?
5
What military forces provided Space Shuttle search and rescue?
7
Does the US Navy guard SpaceX drone ships and make sure bad actors don't abscond with critical technology on the high seas?
7
Why did the number of recovery ships decrease with time?
16
Did NASA muzzle Wernher von Braun during the moon landings?
21
Why is the Falcon Heavy center core recovery done at sea?
4
Where did the floatation collar and sea anchor attach to the command module?
13
Were these Apollo 14 and 15 recovery images taken (by a Navy frogman) using an underwater camera?
9
Why was Redstone Arsenal specifically chosen for post-war rocket development?
4
What is the "recovery" helicopter for the Electron booster carrying?