Which flashing satellite did I see?

While sitting on the balcony of my home in Frankfurt am Main (Germany) this evening a bright flash high in the sky attracted my eye. After a few (~6? seconds) again a flare, now a bit higher and brighter, and then a third and a fourth time. I estimate the first flare was at an elevation angle of approximately 65 degrees, the last faint one almost straight above me.

It was definitely not an aircraft, at least not anything regular.

I looked to me like a satellite passing almost exactly overhead, on a (near) polar inclination. The flash reminded me of the Iridium flares, but I never saw them repeating like this. Also the duration of the flare was much briefer. Can it be that it was an old generation Iridium satellite that has not yet de-orbited and is spinning and therefore creating intermittent flashes?

Is there a way to look up which satellites passed Frankfurt around 22:26 local time (UTC + 2) on a near polar inclination? Which satellite did I see?

By the way, there are two towns named Frankfurt and a small village called Stadt Frankfurt in Germany.

There are very nice sky charts on that page showing the near polar inclination. 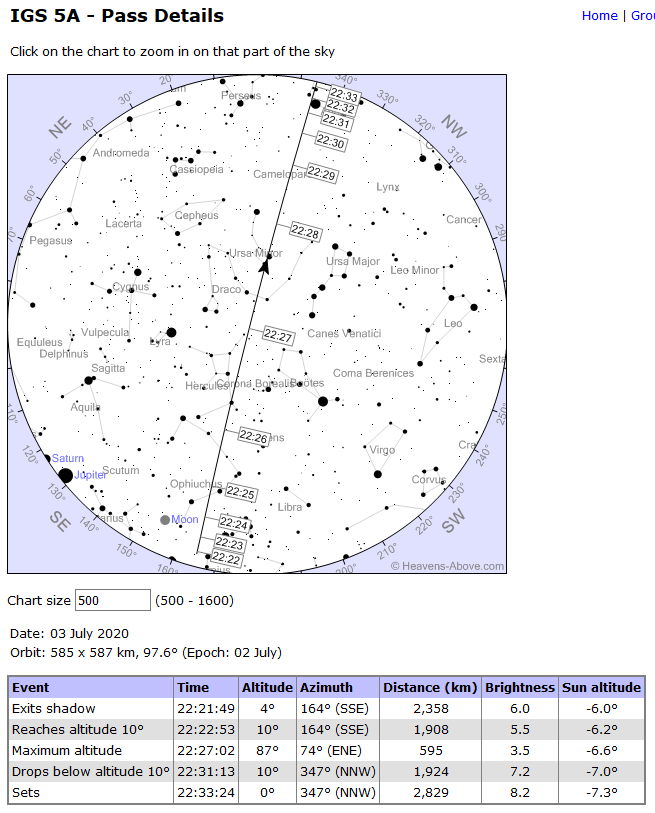 Thanks to the hint of Uwe to look at heavens above, I found out it must have been IGS 5A that I saw.

According to the table above, IGS 5A approched from the SSE and the highest point was reached at 22:27:02 at an altitude of 87°. This is exactly in line with my observations.

After researching a bit further I found that IGS stands for Intelligence Gathering Satellite, part of the Japanese governments spy satellite programme.

On September 15, 2017, the Japanese Government announced that the satellite is no longer operational.

Intelligence Gathering Satellite, optics, launched on November 28, 2009. Unit 3 experienced an abnormality due to the degradation of the power supply system over time, and attempts were made to restore it. However, it has been judged that there is no possibility of recovery due to the power shortage. As a result, we have taken the necessary paperwork to terminate its operation. Optical Unit 3 has been in operation for more than seven years and nine months, exceeding its design life of five years.

It seems a reasonable assumption that the satellite is no longer maintaining a stable attitude and its tumbling causes the intermittent flares that I observed.

Not the answer you're looking for? Browse other questions tagged satellite-flare or ask your own question.