How do phonesats stay cool?

To the question Can a smart phone function in space? this answer says

Multiple android based phone satellites have been launched into space. (At least six according to Wikipedia). I haven't looked into which components they tried using in orbit, but the camera obviously worked.

and this answer (currently) says:

No. Take an ordinary smartphone and put it in outer space and you've got a big problem: Inadequate cooling. The phone is going to destroy itself with its own heat. Normal conduction and convection cooling will not work, all you have is radiation and at those temperatures it's a small part of the cooling.

Also see this answer to Do Phonesats and GoPros work with their internal batteries in space vacuum?

These two good answers are not necessarily in conflict; I just conclude that the phonesats had sufficient cooling.

While cubesat hardware is built for space and adequate heat dissipation will be taken into account in the design, smartphones are built to be in contact with at least 1/2 most of an atmosphere (i.e. aircraft cabin pressure) so people can play games and watch movies on long flights.

Question: How do phonesats stay cool? Did the cubesats have "cabin pressure" or were there some hard mechanical connections to transmit heat to the cubesat itself or were they just kept from using too much power for long periods or something else?

Note this is not a complete answer, but it is much too long and has too much maths for a comment.

The summary is that cooling a phone in space is very unlikely to be a problem (in particular the answers which claim that phones won't work in space for thermal reasons are almost certainly wrong), and conductive cooling (by attaching the phone to the structure of the satellite) would almost certainly be more than adequate. The key insight is that phones are low-power devices and work, on Earth, in cases, made of materials which are not notably good conductors of heat, and they do not fry in those cases.

Something which approaches the worst case

I considered an iPhone 8 (since this is the phone I have), and I took figures from here The key parameters that will matter are

I will assume that we want the phone to run for $3\,\mathrm{h}$. This means that it needs to dissipate about $P = 2.32\,\mathrm{W}$. We are going to have the phone floating inside the spacecraft, not attached to it in any way, and there will be a vacuum in the spacecraft. We are willing to paint both the phone and the inside of the spacecraft suitably so that they both work as approximate black bodies. I will assume that the ambient temperature of the spacecraft is $T_A = 293\,\mathrm{K}$ (about $20^\circ\,\mathrm{C}$). The phone is assumed to radiate power (and to receive radiated power) through its front and back surfaces only (this is why I ignored the thickness of the phone: taking things into account makes things a little better).

The power radiated or received at a given temperature is then

The net power radiated by the phone is then

and I am going to despicably change variable names and call this $P$ below, sorry. We can rearrange this expression to get 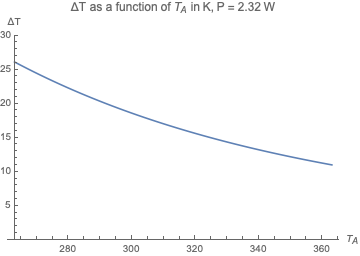 But in practice the phone will fry at some point when $T_A$ gets too high. I don't know what that point is, but I suspect phones are designed to survive in parked cars in direct sun in the summer, and that's a hostile environment. I have some distant background with military electronics, and one of the things people would tell you is that car electronics are tough in terms of temperature spec, and that in general COTS electronics is very often really robust: I think this is one of the insights that led people to experiment with phones in satellites.

Why this is not quite the worst case

First of all, I've assumed the phone is a black body. Well, we can paint it, but in real life it won't be, quite. But it can probably be made pretty close to a black body.

Perhaps I have underestimated the power dissipation? I don't know how much power it's possible to get a phone to use, unfortunately: I know that I can watch video on mine for at least a couple of hours and not worry about it dying, and that bounds the power dissipation to somewhere in this region.

Short-term higher-power dissipation is a problem that phones already need to deal with, so I believe this is not a problem.

Dealing with the power in practice

Of course, no-one is going to fly a phone in a satellite by suspending it in the middle of the satellite and relying on radiative cooling. Instead it should be adequate to simply bolt the phone to some part of the structure of the satellite and allow it to cool by conduction as well as by radiation. Assuming the satellite itself can maintain a reasonable temperature, the increase in that temperature from another two or three watts of power is unlikely to hurt it (a cubesat is intercepting something like $14\,\mathrm{W}$ from the Sun, for instance).

Not the answer you're looking for? Browse other questions tagged cubesat thermal thermal-control or ask your own question.

2
Do Phonesats and GoPros work with their internal batteries in space vacuum?
2
Can a smart phone function in space?
3
Are there any uncrewed spacecraft that maintain(ed) an atmosphere?

5
How can I make robust guesses about waste heat from satellites?
3
How close are Zeeman slowers to being useful for general cooling in space?
6
Did the NASA PhoneSat actually try to use the GPS from the phone itself?
13
How cold is the Martian sky at night? Or the day for that matter?
9
How will Bennu's volatile compounds stay cool and unmodified by the heat of re-entry (OSIRIS-REx)?
6
How are coatings like Vantablack and Aeroglaze Z306 used on spacecraft components? Exactly what functionalities do they provide?
9
How do space blankets (thermal blankets) work?
14
Now that Perseverance is "hot" (RTG in place) and before it gets to deep space, how will it stay cool?
7
How are the electronic circuits in interplanetary missions protected from extremely low temperatures?