What is the blue and purple glitter dinosaur above NASA astronaut Robert Behnken in this video?

What is the story behind this dinosaur; how and when did it get there? 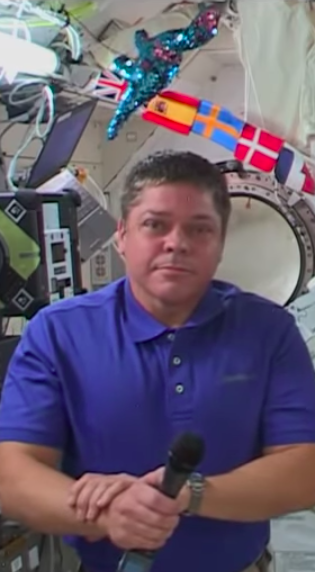 The dinosaur, an Apatosaurus named "Tremor" is the unofficial third crew member (in the DM2 webcast also sometimes jokingly referred to as a stowaway) of SpX-DM2. It was chosen by Doug Hurley's and Bob Behnken's sons, who are both dinosaur fans.

Plush toys have somewhat of a tradition of being used as a zero-G indicator in spacecraft, since they are small, lightweight, fun, and pose no danger to equipment or crew when floating around.

This is not the first dinosaur on the ISS. In fact, there was even a dinosaur born on the ISS: Karen Nyberg sewed one for her son, who is, of course, also Doug Hurley's son.

Not the answer you're looking for? Browse other questions tagged iss identify-this-object space-art or ask your own question.

1
Was the ISS closer to Baja California or California when this ISS press event started? When exactly did it start?

0
What are these thirteen purple grape-like things inside this tank?
6
What is this spinning object seen on a spacecraft above the ISS?
0
What ESA video contains this "family portrait" of comet-visiting spacecraft?
2
Identify this astronaut and shuttle mission
11
What does this SpaceX tweeted photo show and what causes the pure red and blue color?
8
Can Astronauts really see firework displays from space?
8
What's is this very CGI looking clip in this NASA video of the Alpha Magnetic Spectrometer installation?
9
Are there really "Dead End" signs on the outside of the International Space Station?