Sorry for the really bad picture

I am looking at some data from the Parker Solar Probe mission and I was looking at the speeds of PSP at perihelion and aphelion at each new, different, orbit (the orbits caused by a gravity assist of which there are 8) and I found something which I can't explain. Firstly the speeds at perihelion increase after each orbit which makes sense because PSP is getting closer and closer to the Sun (shown in the picture v3>v2>v1). Then I noticed that the speeds at aphelion actually decrease after each new orbit (v6>v5>v4) which I don't understand because the aphelion positions are also getting closer and closer to the Sun. I was thinking that the only way for these speeds to be decreasing would be because of the gravity assist. If this is the case I still don't understand why these speeds would be decreasing since the Venus assist should get less effective as PSP gets faster (not more effective which is what is suggested by the fact that the speeds are decreasing each new orbit). In fact the assist wouldn't just have to be getting slightly more effective but quite a bit more effective in order to not only decrease the speed more than the previous orbit, but do so with PSP moving much faster than before (each new orbit is closer to the Sun). As far as I know the factors that effect the magnitude of the delta-v from a gravity assist are the hyperbolic excess speed (where, generally, lower speed is more desirable), periapsis altitude (which stays fairly constant for each gravity assist - there are a couple outliers but I see no trend with those outliers and the speed of aphelion data), and gravitational parameter (constant). On top of this, even if the gravity assist was capable of getting more effective and decreasing the speeds more and more, this would mean that Venus would always have to be positioned before aphelion in order to decrease its speed by the time it reaches aphelion which is also something I think is unlikely. Does anyone know what may be happening here? *** all my knowledge on this subject is from the internet so I might be missing something really simple *** 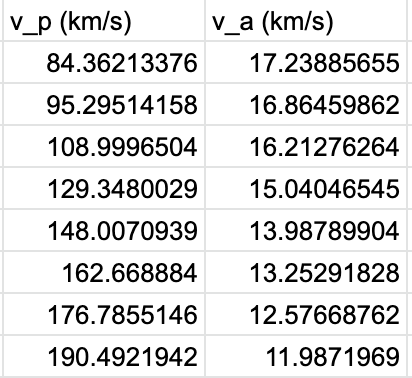 This is the velocity at perihelion and aphelion data where the first row is orbit 1, the second is orbit 2, third is orbit 3, ..., and the last is orbit 8. There appears to be similarities with the 2nd and 3rd orbits and the 5th and 6th which is also possibly important. I know that the pairs of gravity assists 1st and 2nd, 3rd and 4th, 5th and 6th occur at roughly the same position of Venus in its orbit but even this doesn't seem to be what is reflected by the similarities between orbits 2 and 3, 5 and 6 in the data below.

This is a table of all the data I calculated (the perihelion and aphelion distances I found from NASA).

I also found a graph of PSP's speed over time and it displays the same thing that I found: despite the speed at perihelion increasing, the aphelion speed is slightly decreasing.

I have the idea that this decreasing in speed might be the reason why PSP is able to keep its velocity going into the gravity assist fairly constant (I also calculated this) despite its speed at perihelion increasing significantly. I calculated the incoming v_inf 's of PSP for each gravity assist and they are all approximately 22.9 km/s despite the fact that PSP would be getting a lot more speed from the Sun after each assist (I have a weird exception in the speeds for the 6th flyby which I found is 43.7 km/s but I suspect something is wrong with this data since it also has an eccentricity of 140 000). I was wondering how PSP is able to keep such a constant v_inf going into the assist and now I guess it has something to do with it decreasing speed at aphelion.

Alternatively, this latter term monotonically decreases as $r_p$ decreases from $r_a$ to zero. In other words, decreasing periapsis distance while holding apoapsis distance constant results in a decrease in apoapsis velocity.

Just a short supplementary to try and add a more "intuitive" understanding to the two excellent "equation-based" answers.

For me the easiest way to think of this is that you have cause and effect reversed in your description of the problem. Consider PSP at aphelion, which is always more or less at Venus distance from the Sun, so that it can use Venus' gravity to shape its orbit. It is moving "around" the Sun (since it's at aphelion, it is momentarily getting neither closer or further away). Where it goes next is determined by how fast it is moving. If it was moving fast enough it would stay in a circular orbit, with the Sun's gravity pulling it around just enough to stop it getting further away, but not enough to bring it closer. (this is what Venus does, near enough). If it is going less fast than that, then the Sun's gravity bends its trajectory in more sharply, so it ends up curving "in" towards the Sun. As it moves closer, gravity both bends and accelerates its trajectory, until in the end it speeds up enough that it stops getting closer to the Sun (perihelion) and then starts to move away again. The slower it was moving at aphelion, the more "falling in" it needs to do to reach perihelion, so the closer to the Sun it gets, but, it turns out, the faster it will be going at perihelion. So this is what the equations are showing -- for a fixed aphelion distance, the slower you are going at aphelion, the lower you perihelion will be, but, in fact, the faster you will be going at perihelion.

When thinking about the speeds and distances in a Keplerian orbit we turn to our friend the vis-viva equation:

where $v$ is the speed at distance $r$ for an object with a semi-major axis $a$ and $GM$ is the gravitational constant $G$ times the Sun's mass M. We can call that product the standard gravitational parameter of the Sun and it's about 1.327E+20 m^3/s^2.

The distances at periapsis and apoapsis $r_p, r_a$ are given by

where $\epsilon$ is the eccentricity of the orbit. Put these together and the speeds at periapsis and apoapsis $v_p, v_a$ are

Since you have two equations and two unknowns for each orbit, in principle you can solve for the semimajor axis and the eccentricity for each row in your table. You can imagine that as long as both parameters can vary, you can make the speed at aphelion either increase or decrease even though the speed at perhihelion decreases.

You can get a big hint from the fact that the orbit starts circular and ends very elliptical and suppose that eccentricity generally increases, and remember that Parker needs to regularly access Venus's orbit each time it moves closer to the Sun since it uses Venus' gravity rather than propulsion to lower its perihelion, so it's probably a good first guess to assume that the orbit keeps a roughly constant aphelion and its perihelion and eccentricity both decrease over time.

An orbit with a fixed apoapsis and decreasing periapsis will have increasingly slower speed at apoapsis so that it "falls closer" to the Sun.

Not the answer you're looking for? Browse other questions tagged orbital-mechanics gravity-assist astrodynamics astronomy parker-solar-probe or ask your own question.