How a spy satellite eavesdrop on another satellite?

I recently read about Mentor-4 (also alled USA-202 or NRLO-26), a gigantic US spy satellite (operated by NRO and the CIA) with a possible dish radio antenna of 100 meters in diameter located in GEO. Apparently this satellite was located very close to a Thuraya 2, a United Arab Emirates satellite that provides mobile services for many countries.

Apparently, this was not a casual location, since it was confirmed to be a strategy to eavesdrop on Thuraya 2, by documents released on Sep 9, 2016 by The Intercept as part of the "Snowden Files". 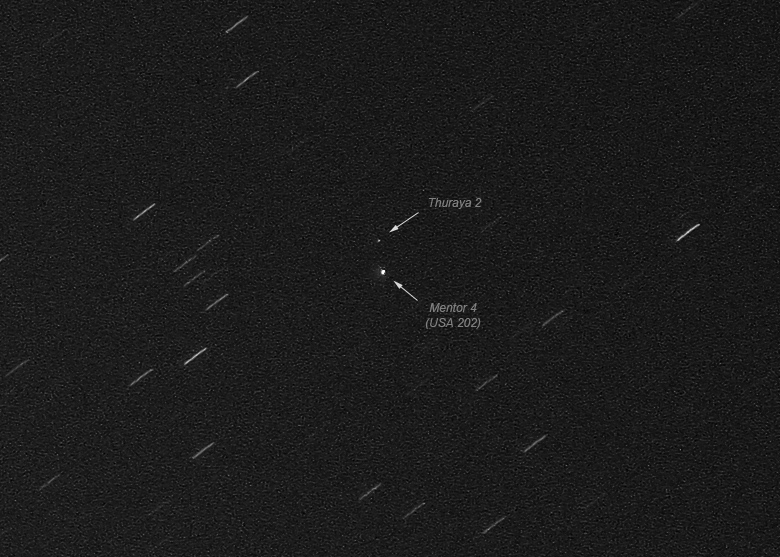 An image taken by amateur astronomer Marco Langbroek from the Netherlands the 8th of December, 2010

Sorry for answering my own question, but I finally got some insights on the topic.

1) Where I can find those "released documents"?

According to Marco Langbroek's (the same amateur satellite tracker that took the image in the OP) excellent review on the topic:

On September 6, 2016, The Intercept published a number of new documents from the Snowden files, in the context of an inquiry into “targeted killings” (drone strikes) and the role and function in these of Menwith Hill, a large US-British SIGINT base in Yorkshire, UK

The actual document where the eavesdropping of Mentor-4 on Thuraya-2 is mentioned can be found here: https://assets.documentcloud.org/documents/3089495/MHS-collection-assets.pdf

The context for this specific release is reviewed in this publication of The Intercept.

2) What was the minimum distance (or the average distance) between Mentor-4 and Thuraya-2 during the eavesdropping?

According to amateur observations, Mentor-4 moved close to Thuraya-2 just as Mentor-2 moved out from the region. The leaked documents and these observations made clear that the eavesdropping of Mentor-4 was a continuation of the activities of another satellite (which now we know was Mentor-2) on Thuraya-2, but the main difference amateur observers spotted was that Mentor-4 got extremely close to Thuraya-2 (way more than its predecessor apparently). 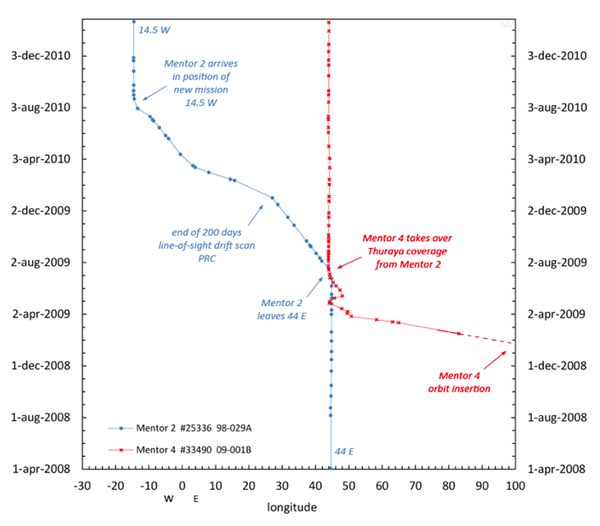 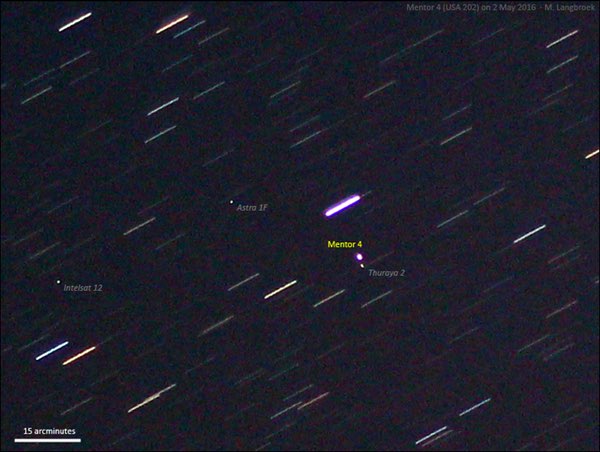 Which was taken in May 2016, apparently. I can retrive a TLE for Thuraya-2 from space-track.org for the 15 of May, 2016, but I can't do it for Mentor-4 (unsurprisingly since this database is controled by the US government and the satellite operations are still classified). For Mentor-4 TLEs I turn to amateur observers. Mike McCant did an excellent job and there's a TLE for Mentor-4 available also for the 15 of May, 2016. Using both in HeavenSat, I can spot their distances from a specific location on Earth and their coordinates to calculate their actual distance.

At 19:14:37 GMT, Mentor-4 and Thuraya-2 had an angular separation of just 3.35 arcseconds, which (using the distance values available from the TLEs) corresponds just to 31 km between both objects!.

Considering the fact that Mentor-4 is believed to have a 100 m dish antenna, this means that, at that time, it was so close that an observer from Thuraya-2 could have seen Mentor's-4 dish ~37% the size of the full Moon (certainly enought to spot details of the other satellite with the naked eye). I think the distance might have been quite constant between both but maybe there are even closer values after so many years of chasing each other.

3) How does a satellite eavesdrop on another and why it needs to be close to it to do that?

Here I would accept as a plausible explanation the one made by user3528438. The radio link between Thuraya-2 and ground stations can't be economically feasible using omnidirectional antennas and must be focused towards the target in GEO. That means that there is a relatively narrow beam where the information is traveling. I guess that getting closer to the center of the beam means getting a higher amplitude on that signal. I guess that being 30 km away from the center of the beam with a 100 m dish antenna is enought to pick the signal, so the beam can't be as collimated as a laser.

A dish with 3000 times larger area that was 1000 times closer that was in the beam would have a signal 3×109 times stronger, but maybe we don't want to get directly into the beam for some reason.

So off to the side if the weak, randomly scattered beam power were down by 95 dB relative to the peak we'd still have a signal well above the noise and of the same strength as a ground station.

95 dB is a huge difference! A bit of leakage from the feed horn or scattering from even a tiny structural element of the antenna or surface imperfection could be enough to scatter a billionth of the power in some other direction,

Not the answer you're looking for? Browse other questions tagged artificial-satellite communication-satellite observation or ask your own question.

34
What would it take to get a message to another star?
8
Could a spy satellite image another satellite?
8
Arecibo: Advantages of Giant Dish?
13
How to calculate data rate of Voyager 1?
5
Artificial objects longer than 40 meters in space
3
What is the largest antenna deployed in space?
4
Quantitatively, why will optical communication be better than X-band for deep-space communications?
1
If a MarCO-type CubeSat were in orbit around Bennu, what kind of power would it need to communicate with the Deep Space Network?