Does it snow in LEO?

How does water spray behave in Low Earth Orbit (LEO), from the side exposed to the Sun to the side in Earth's shadow? Could it be used as means of augmenting atmospheric drag and deorbiting defunct spacecraft and debris from LEO faster than their orbits would naturally decay?

The core idea of this method is to increase the area-to-mass ratio of these objects such that the atmospheric drag can cause their natural re-entry, thus “cleaning up” different regions in the near-Earth space. The drag augmentation system proposed does not require any docking system and just an uncontrolled re-entry can follow, thus it seems a short-term application free from the usual technological issues of these debris removal systems.

Venerable idea, but what about the other way around? Instead of increasing the area-to-mass ratio of space junk, would it be feasible to increase local atmospheric density by means of spraying water ahead of their orbits, while perhaps at the same time using such spraying as means of maintaining orbit (propulsion for orbital reboost) of the "drag augmentation device"?

Edgar Andreas made a nice chart for water sublimation in a vacuum at various temperatures: 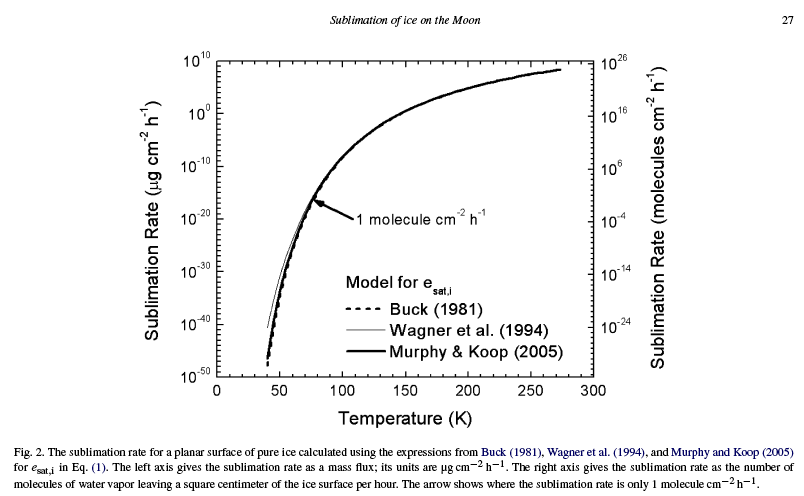 At 270 K it looks like a square centimeter of water ice surface sublimates 100 grams per hour. A typical snow flake masses 3 milligrams. Unless the snowflakes were cryogenic, they'd quickly sublimate

Root square mean speed of water molecules at 270 K would be ~.618 km/s (if my arithmetic's right). The water vapor cloud would quickly dissipate.

But it seems to me all these would dissipate too quickly to intercept and bring down much orbital debris.

Based on your comment stating you're question is irrespective of if the water is liquid/snow etc. I'd suggest reading about tungsten dust.

Tungsten dust has been proposed as a solution to this problem, in fact you can even read the patent for it. The general concept is to release a collection of tungsten dust into a specific orbit to more quickly de-orbit craft in that region of space. The downsides are pretty major though, since the dust itself will de-orbit it will potentially pass through other regions of space; it will also cause a significant increase in drag in ALL objects that fly through it so you might end up de-orbiting a spacecraft that shouldn't be de-orbited. On the plus side though, since the particles are very small they have a reasonably low ballistic coefficient so they will only stay in orbit for a short period of time. I remember discussing this with a colleague and for Envisats orbit the lifetime of the dust was only about 8 years.

Water cools rapidly in a vacuum to its boiling point at the ambient pressure. STS-1 attempted to dispose of waste water by venting it into space. It froze, forming a fair sized mass on the side of the shuttle.

Water jetted into a vacuum will form pellets with a size that depends on the jet diameter, velocity and probably also water temperature forming a cloud of 'sleet'. It would sublimate, but could last long enough to interact with solid debris.

Not the answer you're looking for? Browse other questions tagged low-earth-orbit debris water atmospheric-drag drag-augmentation or ask your own question.

3
Could it be possible to "steam" up water to orbit and collect it there?

29
Reason for space debris clustering in LEO
6
Deorbit time for satellites in LEO
13
Why are LEO satellites not aerodynamically shaped?
6
What is the smallest object that would survive a reentry from LEO? What would it be made of?
3
Deorbit LEO debris with a higher orbit laser?
5
Approximate Amount of Debris in LEO?
14
Why aren't there any active space debris removal systems implemented currently?
7
What events caused this debris in highly elliptical orbits