Were these Apollo 14 and 15 recovery images taken (by a Navy frogman) using an underwater camera? 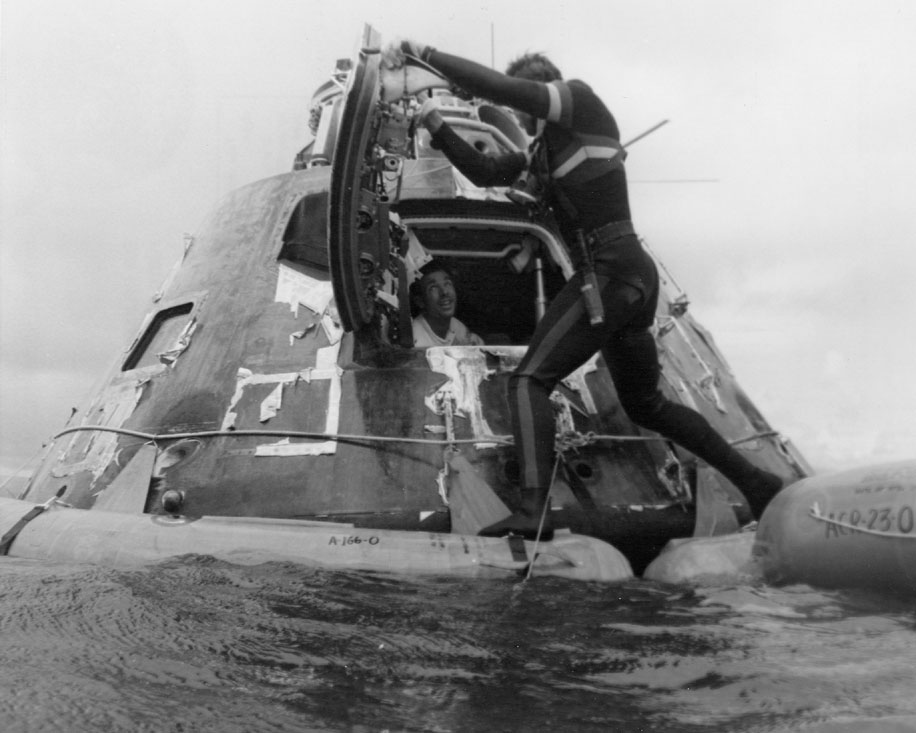 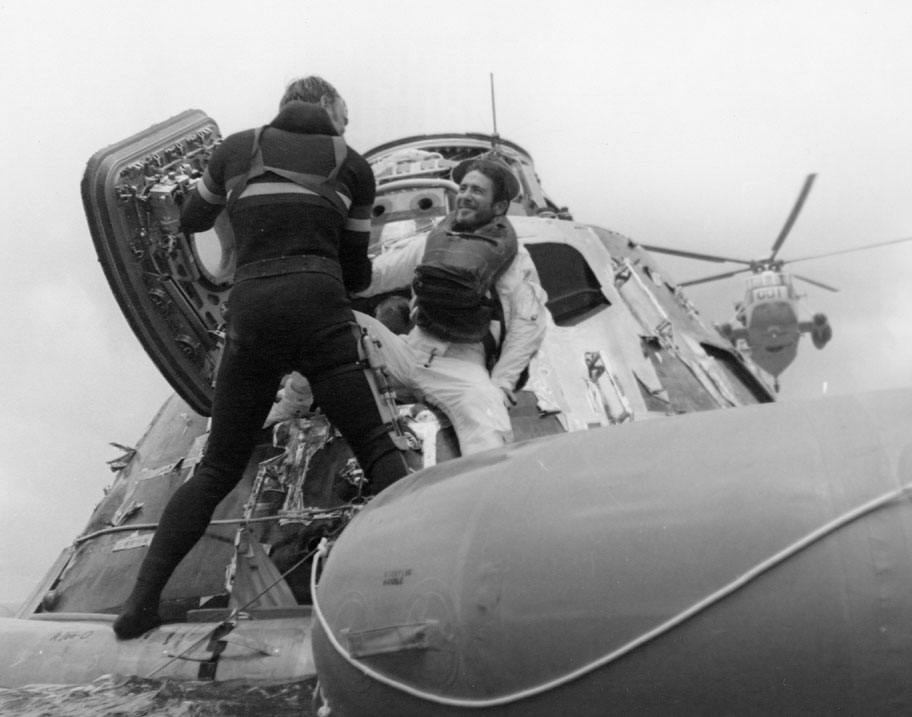 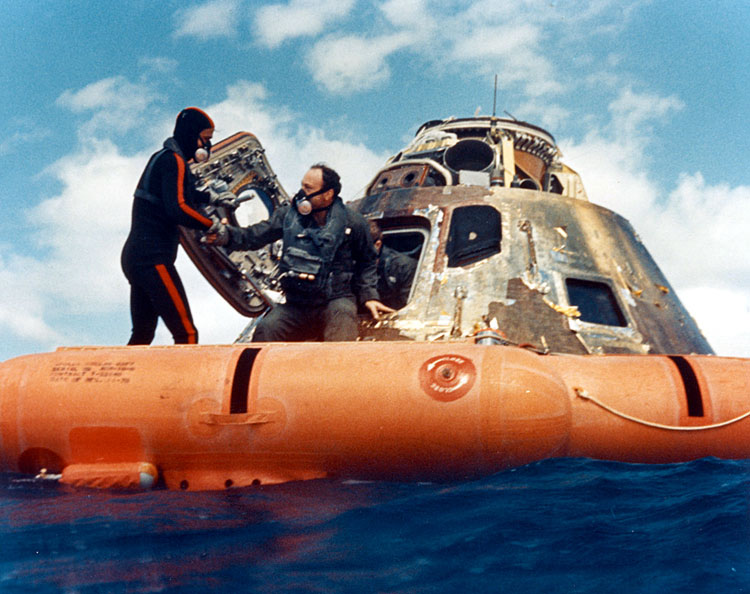 These images were taken after the flotation collar was mounted and inflated by the frogmen. Also the raft was inflated. The divers jumped off a helicopter before, no rescue ship was present. Camera position was directly above the water surface.

So the camera had to survive the jump of the diver photographer from the helicopter down to the water. The camera should be small, lightweight, compact and robust and to be used under and above water. Conventional cameras within a special underwater case would have been too heavy and bulky.

So I guess the Navy frogmen used a Nikonos underwater camera for 35 mm film?

The answer is on this National Geographic page about the best pictures from NASA's official photographer Bill Ingalls:

If you love space, odds are you’ve admired the work of Bill Ingalls. He has been NASA’s senior contract photographer for 30 years, a job that has taken him across the world—but not yet beyond it—to cover major moments in space exploration.

In this DOD Pdf about Apollo Recovery Operational Procedures equipment furnished by NASA is mentioned. Underwater cameras, 1 or 2 per recovery diver team and 3 per primary recovery ship. 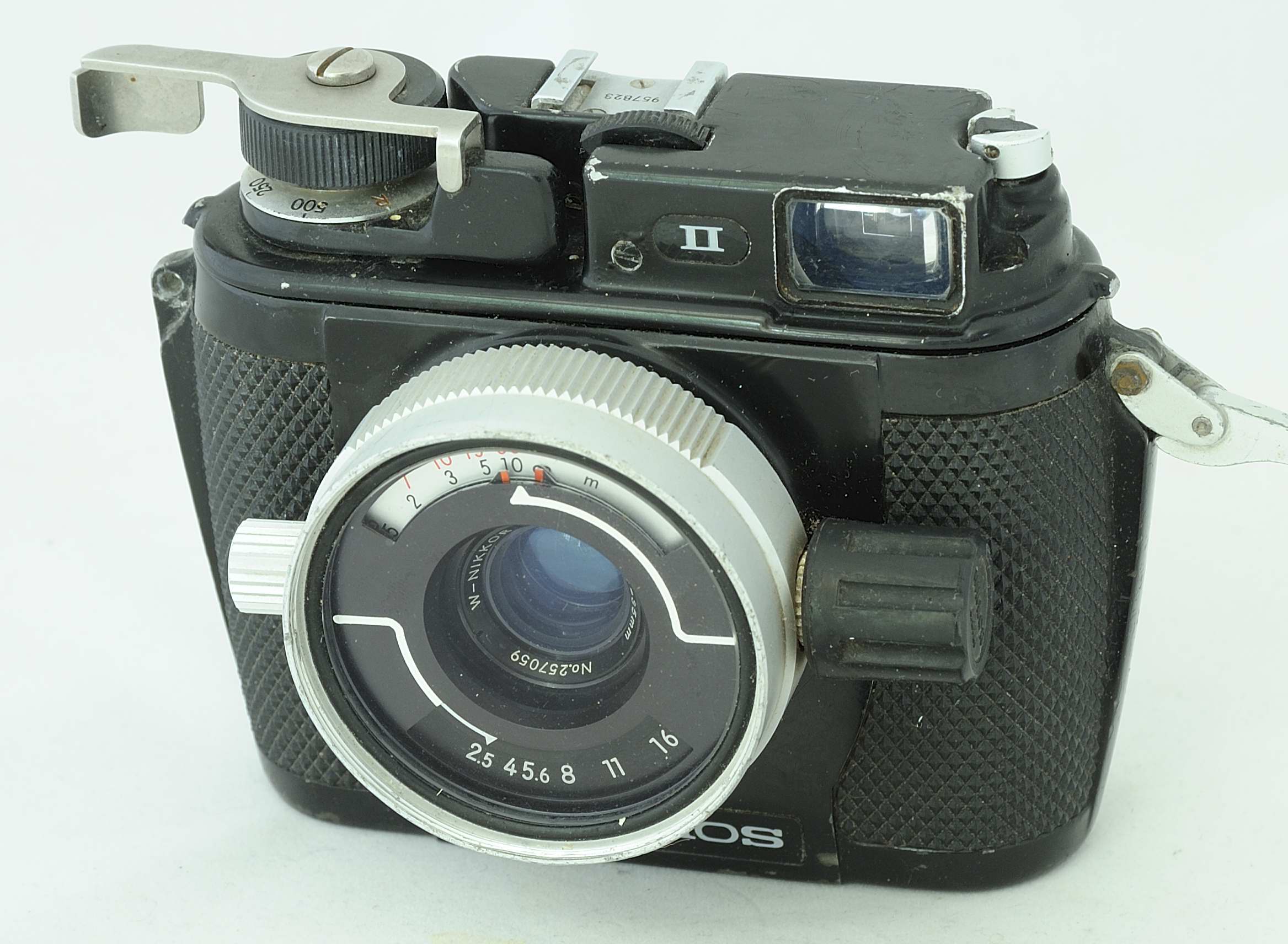 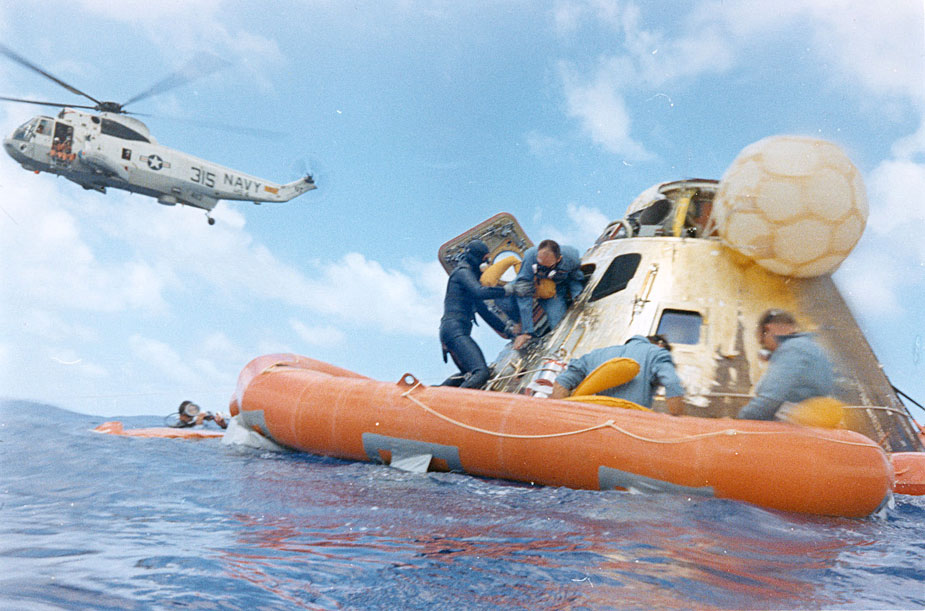 A Navy diver helps Al Bean into the recovery raft. Pete Conrad is at the far right and Dick Gordon is at the center. Note the diver in the water to the left of the raft taking pictures. Photographs are also being taken from the helicopter. 24 November 1969. Scan by Ed Hengeveld.

So at least two divers were equipped with Nikonos cameras, the diver shown with camera and the diver who has taken the image.

Taking pictures by Navy divers during recovery has a tradition: 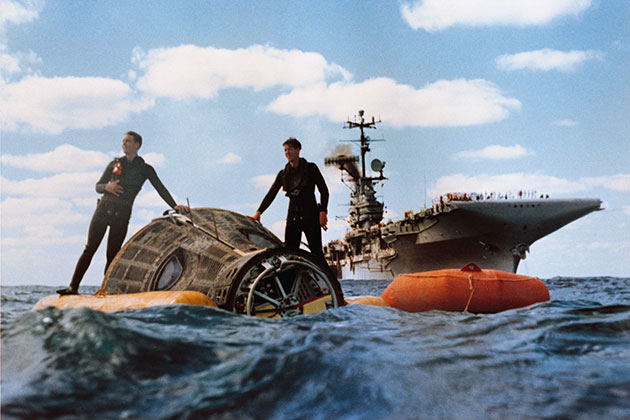 Navy divers prepare to retrieve the Gemini 6A crew on16 December 1965. Green dye was released by the spacecraft on splashdown, making it easier to spot them from the air. Credit: Courtesy of NASA

Image and text from amateurphotographer.

But the Nikonos I was introduced in 1963, so it might have been used only for the last Mercury flight.

Bold font enhancement within block quotes by me.

Not the answer you're looking for? Browse other questions tagged apollo-program photography recovery apollo-15 apollo-14 or ask your own question.

39
If the Apollo mandate were delivered today, would the mission vehicle(s) and profile be similar?
4
Where were PFS-1 and PFS-2 stowed aboard Apollo 15 and 16, and how were they released?
12
What were the differences on the LM ascent stage engines on Apollo 9, 10, and 11?
6
How were these NASA engineers able to take men to the moon and bring them back with this limited computing capability?
13
What colors were used in the Apollo Lunar Module interior, and why?
12
How were the LM astronauts supported during the moon landing and ascent? What were the max G's on them during these phases?
2
Why is there no image of the Earth taken from the lunar surface during Apollo 12,15 and 16?
4
Where did the floatation collar and sea anchor attach to the command module?
0
How did the TIROS video tape recorders record and playback images rather than audio; how were the signals modulated?
5
Were the “frogmen” who performed ocean recovery Navy SEALs?