What was the nature of the communication problems during Apollo 11's Eagle's descent? How were other antennas selected?

BUCKLEY: Many of us who are not space historians, who were not around when the Moon landing happened for Apollo 11 donâ€™t realize what a daring adventure it was and how close it was to being an aborted mission as Apollo 11 was approaching.

Weâ€™re going to show a couple of clips in a moment to try to put that into perspective, but before we get to those tapes, was it touch and go there as the Eagle was approaching the lunar surface?

DUKE: It had been touch an go ever since we started our descent. We had communication problems first, mission rules said you had to have data so we had to reorient the spacecraft, select other antennas. We got that worked out and then we had computer overloads which was z real serious situation I thought, but we overcame that with great work at mission control by a guy named Steve Bales and Jack Garman.

And then we had a trajectory problem, so all the way down it was crisis after another it seemed to me...

Question: What was the nature of the communication problems during Eagle's descent and in what way was the spacecraft reoriented, which other antennas were selected and how was that done?

The problem and its solution is described in section 16.2.4 of the mission report.

Basically, the attitude of the LM was oriented in such a way that parts of the spacecraft were in the way of the the direct path between the S-band antenna and Earth. Also, some signal reflected off the surface of the moon, causing multipath interference. 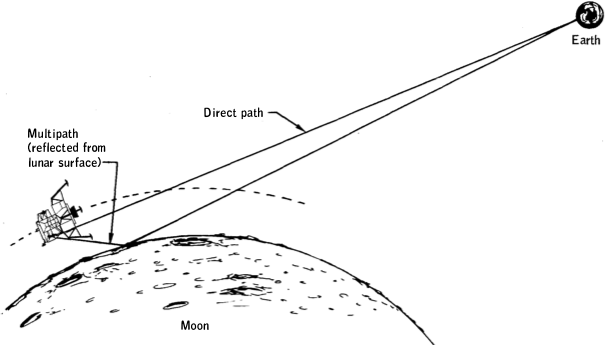 To make matters worse, a databook used for planning the mission had an improperly drawn diagram. The diagram was supposed to show the angles at which the antenna would be blocked by parts of the spacecraft; even more area was blocked than the diagram indicated. Part of this was caused by a late addition of plume deflectors which were added at the launchpad to the LM. 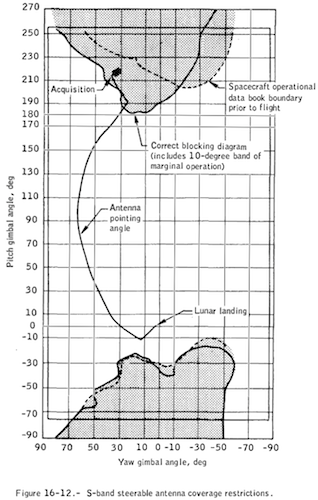 After the mission, the databook diagram was fixed, and the attitude of the LM during descent was changed so the signal path would not be blocked by parts of the vehicle.

The official description is as follows:

When the steerable antenna was selected after acquisition on revoluÂ­tion 14, difficulty was encountered in maintaining communications. The downlink signal strength was lower than predicted and several times deÂ­creased to the level at which lock was lost. Errors were discovered in the antenna coverage restriction diagrams in the Spacecraft Operational Data Book for the pointing angles used. In addition, the diagram failed to include the thruster plume deflectors, which were added to the lunar module at the launch site. Figure 16-12 shows the correct blockage diaÂ­gram and the one that was used in the Spacecraft Operational Data Book prior to flight. The pointing angles of the antenna were in an area of blockage or sufficiently close to blockage to affect the coverage pattern.

As the antenna boresight approaches vehicle structure, the on-boreÂ­sight gain is reduced, the selectivity to incoming signals is reduced, and side-lobe interference is increased.

Further, a preflight analysis showed that the multipath signal, or reflected ray (fig. 16-13), from the lunar surface to the vehicle flight trajectory alone would be sufficient to cause some of the antenna trackÂ­ing losses. Also, the reduction in antenna selectivity caused by vehicle blockage increases the probability of multipath interferences in the anÂ­tenna tracking circuits.

In conclusion, both the vehicle blockage and the multipath signals probably contributed to the reduced measured signal.

For future missions, the correct vehicle blockage and multipath conÂ­ditions will be determined for the predicted flight trajectory. OperaÂ­tional measures can be employed to reduce the probability of this problem recurring by selecting vehicle attitudes to orient the antenna away from vehicle blockages and by selecting vehicle attitude hold with the antenna track mode switch in the SLEW or manual position through the time periods when this problem may occur.

There's no mention of selecting other antennas.

Not the answer you're looking for? Browse other questions tagged nasa apollo-program history lunar-landing apollo-11 or ask your own question.

8
Is long range radio communication possible on the lunar surface?
12
What was the procedure to stop the descent engine on the Apollo 11 LEM?
20
Could an Apollo LM land uncrewed?
21
How were the Flight Journals of the Apollo missions originally transcribed/recorded?
3
How close did Apollo 16 astronaut Charles M. Duke Jr. get to the edge of Plum crater?
27
What were the problems on the Apollo 11 lunar module?
11
Were the Apollo broadcasts recorded locally on the LM?
16
Apollo altitude vs rate-of-descent schedule
15
What does the ATOLL programming language look like?
12
What did "verb 50 - noun 90" mean during Apollo 11 powered descent? (1202 alarm)