Where should a lunar polar ISRU mission land?

In situ resource utilization of water ice in eternally shadowed craters on the Moon's poles might provide water for rocket fuel and astronaut survivability cheaper compared to launching water from Earth. Today we have great lunar maps with 2 meter resolution of the entire north pole.

Can we today specifically pinpoint one or a few ideal locations for the first polar ISRU landings? Specific as in a location with a name and an arrow to it on a map. Or is even more orbital reconnaissance needed?

I imagine a landing of stationary solar panels where insolation is constant, to have not only constant power but also (near) constant thermal conditions for convenience. And then a rover which rolls out a power cable from that station as it travels into a nearby eternal (billion years old) shadow where water could've been "trapped". I think that a "lunar hopper" would have a power supply problem in the eternal darkness which might be the coldest place in the Solar system. Nuclear RTGs are expensive and would kind of symbolically defeat the concept of cheap lunar solar-water-ISRU.

I gather that precision landing on the Moon is not much of a problem nowadays. Steep slopes should be avoided though, and since a sharp contrast between eternal sun and eternal shadow is sought after in order to shorten rover travel distance, this might be the dominating geographic restriction. (Or maybe the "rover" could be designed as a cat yarn ball and be kicked down off the brink). Use your imagination and reasoning to come up with attractive geographical conditions which could be pinpointed!

Kamaz of Future Moon did this graphic of Whipple Crater: 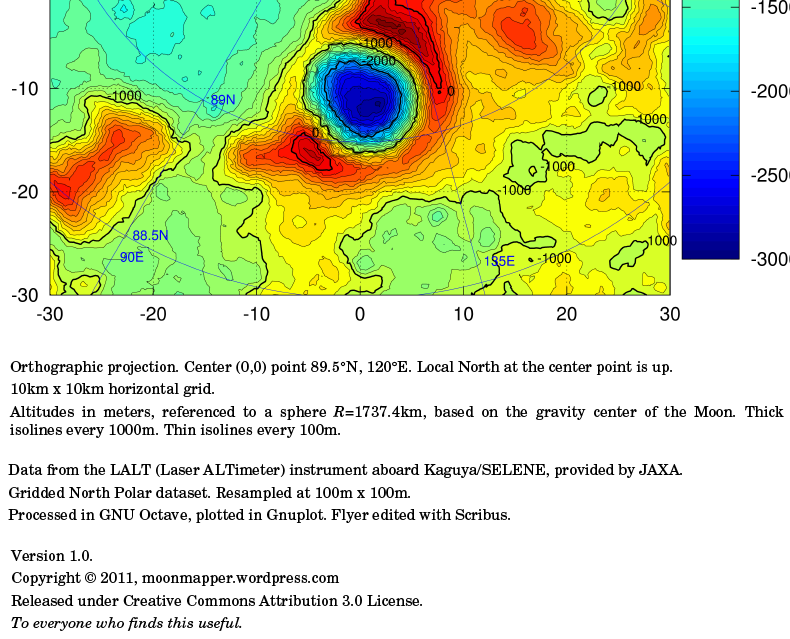 The deepest red near the top is thought to be a peak of nearly constant illumination. The deepest blue is a cold trap that might have rich volatile deposits.

As can be seen by the spacing of the isolines, the crater floor's flat. Unfortunately the crater rim that enjoys near constant illumination is steep.

A rover traveling from the illuminated rim to the shaded floor would need to cross about 8 km of terrain, some of it pretty rough.

I like a location on the rim of Shackleton crater near a so-called Peak of Eternal Light (PEL) which has eight small craters (1-3 km diameter) very much nearby. A power cable from a peak to the near side of a crater floor looks to be about 1-2 km distant. That area is also about equidistant between two PELs which if connected would provide continuous solar power.

In the picture, I am referring to the craters located about at 8:30: 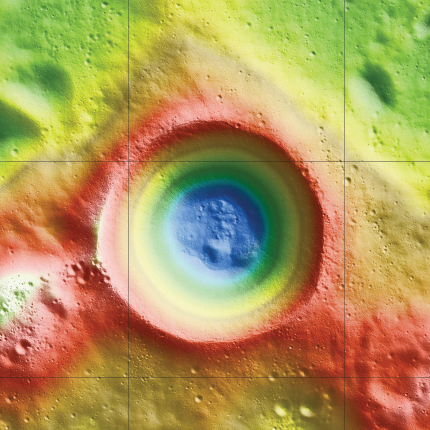 Not the answer you're looking for? Browse other questions tagged the-moon lunar-landing isru pole or ask your own question.

15
Why didn't Apollo land on the Lunar poles?
4
"Lunar vacuum cleaner": Design considerations for regolith dust suction system in exospheric conditions
10
What are the synergies between human landing on the Moon and on Mars?
5
Would it be practical to use a rover with a cable to a power and communication station?
4
Are there solar panels available today that would last through various lunar days?
5
Is SpaceX lunar mission only a flyby mission, or it is going to land on Moon too?
4
How to communicate with a lunar polar mission?
8
Has NASA "gone south"? Why are astronauts needed to explore the Moon's south pole?
4
Why can't the VIPER lunar rover recharge its 100-day power source using its solar panels?
2
Why only 100 days for VIPER to look for water in the lunar south pole region?