Why do many Mars missions launch now, if the Hohmann transfer orbit is the most propellant-saving one?

The Hohmann transfer orbit is the most propellant-saving transfer orbit to Mars. When using this kind of transfer, the rover/rocket/etc. starts from Earth when Earth and Mars are in conjunction.

But now, in 2020, many Mars missions will be launched, but Earth and Mars are in opposition. I do not understand why they do that, since the Hohmann transfer orbit saves the most propellant?

If somebody would explain me the reasons, I would be very glad!

The following image depicts Earth's and Mars' orbit as circular, rather than elliptical to simplify calculations, and shows a sample Hohmann transfer from Earth to Mars. Distance is in AU. All objects depicted are moving counterclockwise. 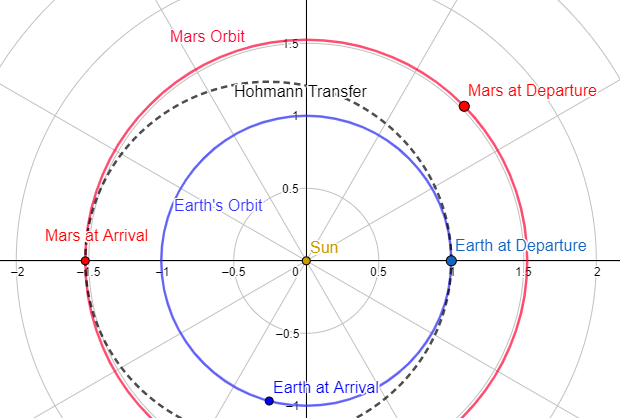 A Hohmann Transfer from Earth to Mars takes about 0.708 years with the aforementioned simplifications. In that time, our depicted Mars (orbital period about 1.88 years) will move approximately 135° around its orbit, and the depicted Earth will move about 255°.

As such, in this simplified view of the transfer, at the time of departure, Mars is near Western Quadrature (Rather than Opposition) to Earth, similar to its current position as of late July, 2020.

Image is from Solar System Live, UTC 2020-07-25 12:53:47, with Helocentric Longitude set to -55° to rotate the image similar to the graph above. Image uses the actual orbits, rather than simplified circular ones, and the planets are not to scale.

Much of engineering is about compromises. One can find an ideal solution, like a Hohmann transfer orbit. Yes, that is the most fuel efficient way to get from earth orbit to Mars orbit. It is like the top of a rounded mountain. That is the peak, but there is a lot of ground near the peak that is almost as high. Maybe you are willing to give up a bit of fuel efficiency for some other objective, like launching this year, getting there faster, or having a radio link for your data when you get there. (Almost) every mission has a number of objectives, which need to be traded off against each other to make a mission design. Fuel efficiency is important, but not the only objective. If launching this year is important, that may cost you one instrument, or degraded performance on one. It may be worth it.

Not the answer you're looking for? Browse other questions tagged orbit earth mars or ask your own question.

8
When could MAVEN launch to get to Mars, if it misses its launch date?
8
For an EML-1 to Mars transfer orbit, would flying to the right or left of Earth be preferable?
10
How does the roll maneuver allow more mass to be lifted into orbit?
8
Is bypassing LEO more efficient when launching to Venus or Mars?
13
What's the reasonable “window” in days for a Mars-Earth Hohmann transfer?
4
Mars and back, staying only a few days
18
If the Earth spun clockwise, how would that affect Space Exploration?
5
What kind of rocket will ESA(?) launch from Mars? Who will build it?