I'm designing a single open cycle expander rocket engine using propane. However, I've been unable to find out whether or not the fuel is split into the turbine and combustion chamber before or after it circulates through the cooling loop. I would assume that splitting the fuel before the phase change would make it more efficient as it wouldn't necessitate the use of valves to achieve the correct ration of fuel going through the turbine as well as the fact that because of the smaller amount of fuel (in the RL-10 I believe it's around 3% however I believe this would vary in fuels like cryogenic propane) in the cooling loop, it would concentrate the thermal energy where it is most useful, in the working fluid. However, I'm not sure if this is even possible since there is so little fuel travelling through the cooling loop that it could prove to be insufficient in cooling down the combustion chamber walls as it could be evaporated to quickly and significantly reduce it's cooling ability as it has become less conductive (despite propane's incredible range as a liquid of -188 to -42 Celcius).

Although I agree with Organic Marble that open expander cycles should most likely split the fuel before the cooling jacket, there are some examples where this isn't the case. For example in the RD0146 there is a split of the fuel line after the cooling jacket (see image), although this is just to power the fuel boost pump (so in essence it is more a closed expander cyle).

(I would make this a reply to Organic Marble's answer, but it was too long and I don't know how to attach an image to a reply) 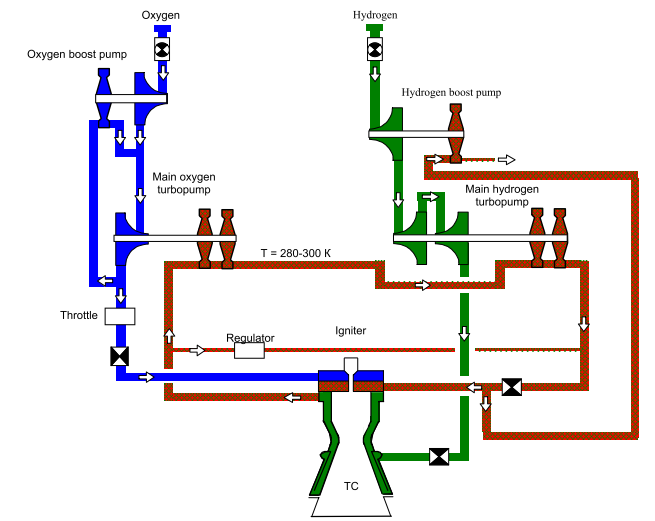 The paper Cycles for Earth to Orbit Propulsion shows that for open (bleed) expansion cycles, the flow paths diverge at the pump outlet. Two designs are shown, the second has a split pump. 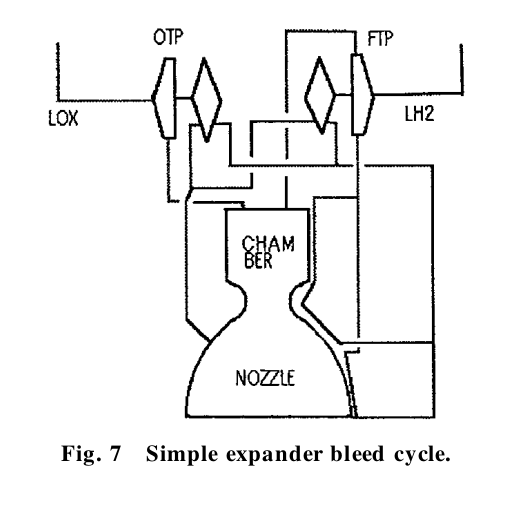 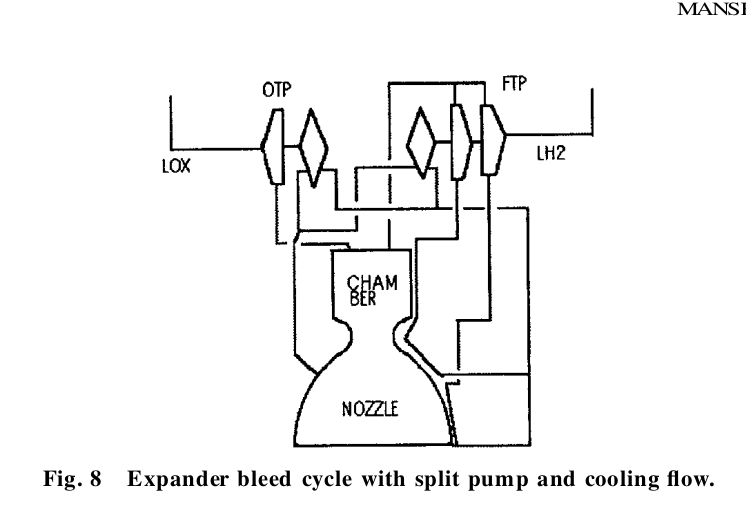 but its accompanying schematic shows all the flow being heated.

Not the answer you're looking for? Browse other questions tagged rockets engine-design cryogenics amateur-rocketry or ask your own question.

4
In turbopump designs where no propellant is dumped overboard what causes efficiency loss in engines?
5
Is it possible to keep fuel and oxidizer tanks pressurized during flight by heating up their contents using exhaust gases?
12
Rocket Engine Plumbing: Still don't understand the Full Flow Staged Combustion Cycle
5
How is chamber pressure and temperature determined for cold gas thrusters?
4
Why can't an expander-cycle engine be built to use RP-1 or other non-cryogenic fuels?
2
How do Expander Cycle Engines Inject Liquid Fuel During Startup?
5
Why don’t any engines use turboelectric oxidiser pumps?
2
Liquid Nitrogen Diluted Rocket