Could the Space Shuttle have landed on any long runway other than those specially reinforced at Kennedy (TTS), and Edwards (EDW)?

Buran was the first space shuttle to perform an unmanned flight, including landing in fully automatic mode. ...

The automated landing took place on a runway at Baikonur Cosmodrome where, despite a lateral wind speed of 61.2 kilometres per hour (38.0 mph), it landed only 3 metres (9.8 ft) laterally and 10 metres (33 ft) longitudinally from the target mark. Specifically, as Buran approached Baikonur Cosmodrome and started landing, spacecraft sensors detected the strong crosswind and "the robotic system sent the huge machine for another rectangular traffic pattern approach, successfully landing the spacecraft on a second try."

The NASA Space Shuttle (I use the term to refer to the assembly family rather than a tail) headed either to the Shuttle Landing Facility at Kennedy Space Center (TTS), or multiple runways at Edwards Air Force Base (EDW). In the event it undershot it could splash into the Atlantic. If it overshot, it could splash into the Pacific. A similar argument may be applied to the Buran landing at Baikonur - except that Baikonur is land-locked first...

Apparently the Shuttle landing strip at both places was specially reinforced designed for a high-speed landing. The wikipedia article on the Shuttle Landing Facility (TTS) writes to say

The runway surface consists of an extremely high-friction concrete strip designed to maximize the braking ability of the Space Shuttle at its high landing speed, with a paving thickness of 40.6 cm (16.0 in) at the center. It uses a grooved design to provide drainage, and further increase the coefficient of friction.

I'm unsure about a similar provision being made for the Buran.

Despite all the high-technology precision involved - having an extremely limited set of runways to head for seems contrary.

In addition to Kennedy, Edwards, and White Sands, several sites were selected as targets for a transoceanic abort landing (TAL), but no launch ever had to perform such an abort. If something went bad during launch before the vehicle had enough energy to get to a TAL site, a mission might have had to do something even more drastic such as a return to launch site (RTLS) abort or an east coast abort landing (ECAL). Any airport with a long enough runway would do. There were several airports designated as east coast abort landing sites, ranging from Myrtle Beach to airports in Newfoundland and Labrador.

The Space Shuttle didn't need a "specially reinforced" runway. If a runway could accept a 747 it could probably handle the shuttle. The shuttle's maximum landing weight is in the range of a large airliner (less than half that of a 747), so load is not a problem. The major issue would probably be length... the shuttle's high landing speed meant it needed a lot of room to stop, so it would have been limited to the longer runways of major airports - which would almost certainly be strong enough.

Probably the biggest issue with landing a shuttle at an alternate airport would be traffic. A high-speed glider on an unscheduled approach, committed to landing on its first try would present some serious air traffic control problems at any major airport. Not to mention the hazardous (flammable/explosive/toxic) chemicals on board. If an airport was specifically "prepared" to be a shuttle alternate, it wouldn't be about physical/structural preparations, it would be about closing it and clearing it of all air traffic and people for a suitable window of time in case the shuttle needed to land there.

In France, a French Air Force base with a 5 km long runaway is approved for Transoceanic Abort Landing (TAL) but was never used. The runaway is the longuest one in europe and also used by French Army contractor as a test facility.

Source : Wikipedia and being French

RAF Fairford was the only TransOceanic Abort Landing site in the UK. It was never used to land a shuttle, though.

As far as I'm aware the American portion of the base is being shutdown, so this runway won't be available in the future.

Yes, there were several designated landing sites and abort landing sites both inside and outside the USA. Of these, only Kennedy, Edwards and White Sands were ever used (White Sands only once).

Shuttles landed on the lakebed runways at Edwards many times, which had no concrete at all, just markings painted on the desert floor. 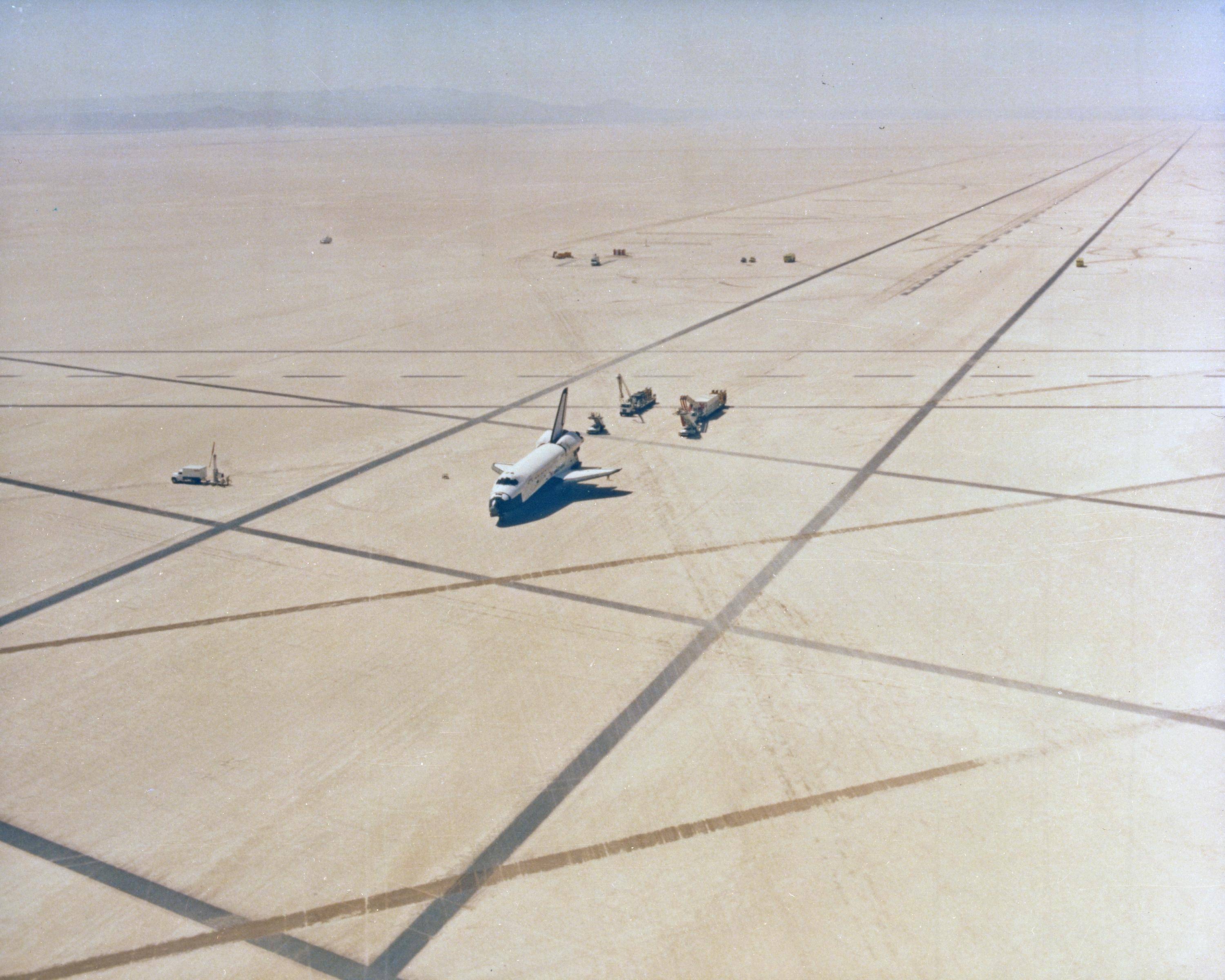 These runways are separate from the concrete and asphalt runways also located at Edwards (also used by the Shuttles). The dry lakebed is located at the upper left of the 2nd picture. 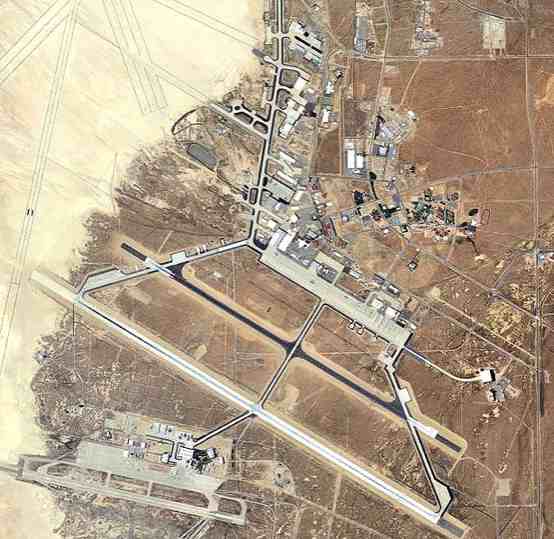 Columbia actually landed at White Sands Space Harbor in 1982. See http://www.airfields-freeman.com/NM/WhiteSands_NM_82_Shuttle.jpg for a picture of the landing.

I was stationed at NAS Keflavik, Iceland in 1994. I remember reading in one of my "welcome aboard" pamphlets that runway 11 was a designated alternate or emergency landing strip for the STS. I vaguely remember something about it being highly unlikely because the STS would have to be in a polar orbit versus an equatorial. I will try to dig through old things to find it.

Because of the needed orbital inclinations, the prime TAL site frequently was a remote site in North Africa.

An interesting footnote is that the landing strip could support an emergency Shuttle Orbiter landing, but it could at the time not support the orbiter's later removal on the back of 747.

If it had ever been used, it was understood in doing so only the crew and payload could be saved and recovered while the orbiter would have been potentially lost.

The Mataveri Airport on Easter Island was a planned abort site for the Space Shuttle. Since the Space Shuttle has no means of propulsion, you might want to have a fairly tight mesh of potential landing sites in event of an emergency.

As a nice side-effect, the long runway allowed for larger passenger aircraft to service the island, which boosted tourism. A nice win-win situation.

I know that there were multiple alternate landing sites approved, even relatively minor locations. In particular, I grew up in the small town which hosted Sewart AFB (Smyrna, TN), and a big deal was made about the fact that we were one of the 'emergency landing sites' for the shuttle.

19
If the Space Shuttle missed its landing approach, what could have been done?
13
Why were two different California airbases (Vandenberg and Edwards) intended for Shuttle launches versus landings?
5
What will be the launch and landing sites for Orion?
5
What military forces provided Space Shuttle search and rescue?

19
If the Space Shuttle missed its landing approach, what could have been done?
22
Do windows in space stations, the space shuttle, other spacecraft have practical usage?
9
How long could the shuttle remain docked to ISS and still capable of landing?
5
What military forces provided Space Shuttle search and rescue?
11
What caused STS-129's low energy condition on the HAC?
4
What is the maximum apogee a Space Shuttle could have reached?
3
Why was the Cape Canaveral Skid Strip never used for a Space Shuttle's landing?