Why did they use uprighting bags in different sizes for the Apollo CM? 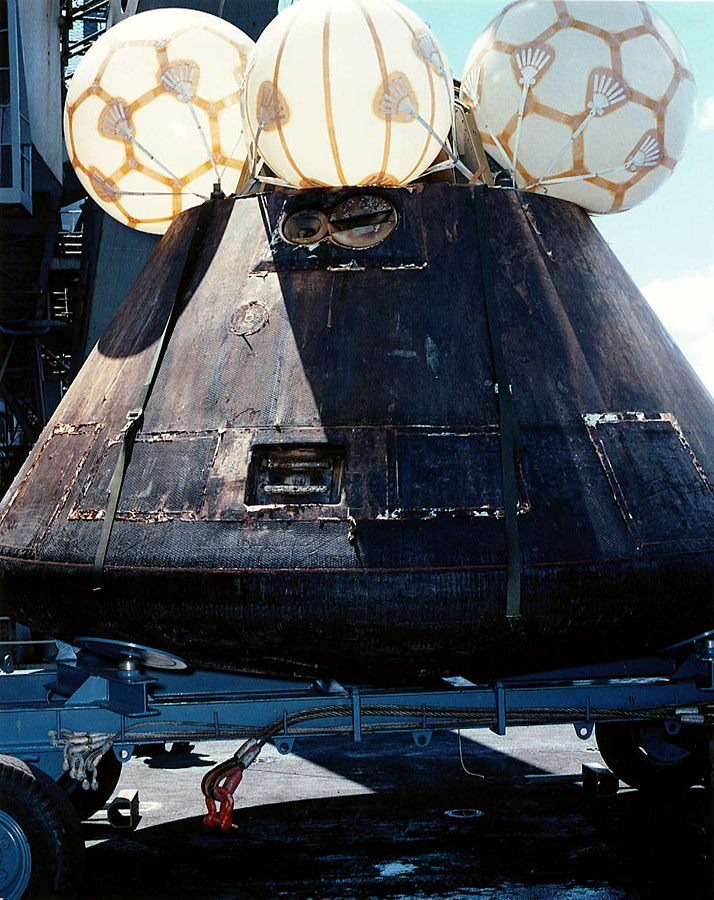 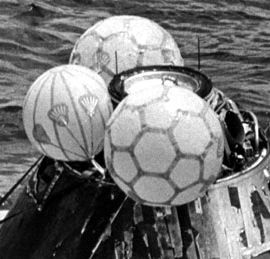 If the capsule splashed down with the apex under water, the white spherical uprighting bags were inflated to turn the CM "heatshield down".

Why did they use one smaller and two larger uprighting bags?

This is explained in the Apollo Program Summary Report. A floating command module has two stable positions; stable II is upside-down and undesired. It was discovered that three identical uprighting bags was not enough to get out of the stable II position, so the Z-axis bag was made smaller:

In addition to the overall weight increase, a center-of-gravity shift resulted from the changes made to the command module after the Apollo I fire. Full-scale performance definition tests required by these changes showed that the uprighting capability of the Block II command module was marginal with the two Y-axis bags inflated (one on each side of the upper deck as shown in fig. 4-8). Moreover, a combination of an inflated Y-axis bag and the Z-axis bag (on the side opposite the hatch) resulted in a roll of the command module about its X-axis to a new stable position where uprighting did not occur. Development tests were conducted at the Manned Spacecraft Center to investigate different suspension systems for the bags and to investigate the ability of a smaller Z-axis bag to reduce the roll problem and provide enough buoyancy to assure uprighting. 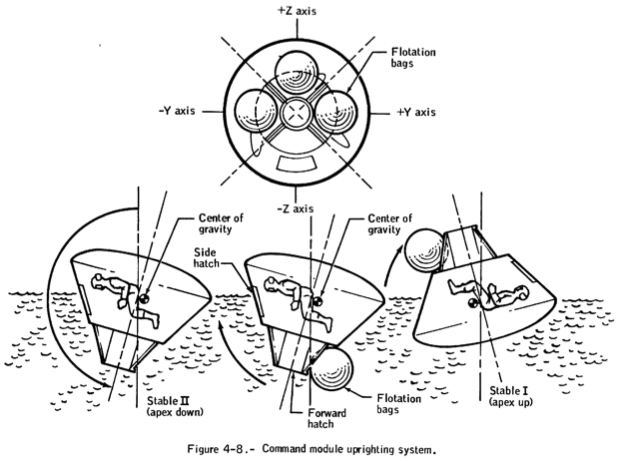 It also mentions that as a backup, two crew members could move around in the cabin, in an effort to change the center of gravity:

Also, tests were performed to determine the feasibility of two crewmen lowering the center of gravity by moving from the couches to the aft deck. As a result of these tests, the uprighting system was redesigned to provide uprighting capability with any two bags inflated after two crewmen had moved aft. The final configuration was capable of uprighting the command module in 5 minutes if both compressors and all three bags were operative. With either a failed bag or compressor, 12 minutes was the maximum time required for uprighting. The system could not upright the command module if both a bag and a compressor failed.

"Okay, you two guys get out and push."

The first Block I version of the capsule used three bags of the same diameter (43 inch). The later Block II used one smaller bag (34 inch). The volume of the small bag was 49.43 % of the larger ones. So they wanted to try a smaller bag with half the volume and calculated a 34 inch diameter bag. 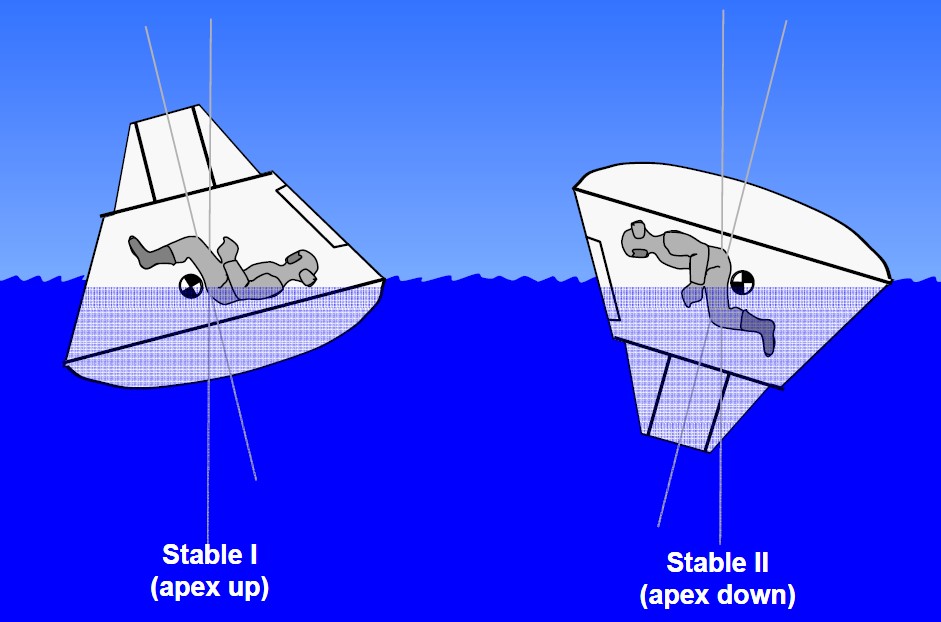 Stable I was the desired position (apex up, heatshield down) with the crew hatch above the water surface. Stable II should be uprighted by the inflated bags to Stable I.

The Block I version vehicle weight upon splashdown into the ocean was approximately 9,000 lbm. Block II was much heavier, about 11,200 lbm and the center of gravity was shifted.

Tests were done using models scaled 1:5 and 1:10 and full-scale tests with boilerplates 1:1. Using finite elements computer models was impossible in the sixties. Uprighting should work too when only 2 of three bags were inflated. But a problem was found when one of the Y bags was not inflated.

However, a Y/Z bag combination resulted in a roll of the CM about its X axis to a new stable position where uprighting did not occur.

Uprighting of the Y/Z two bag combination was improved by the smaller Z bag. 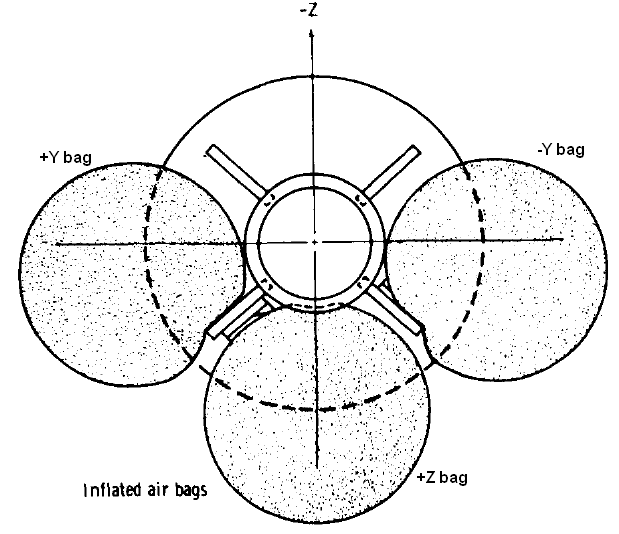 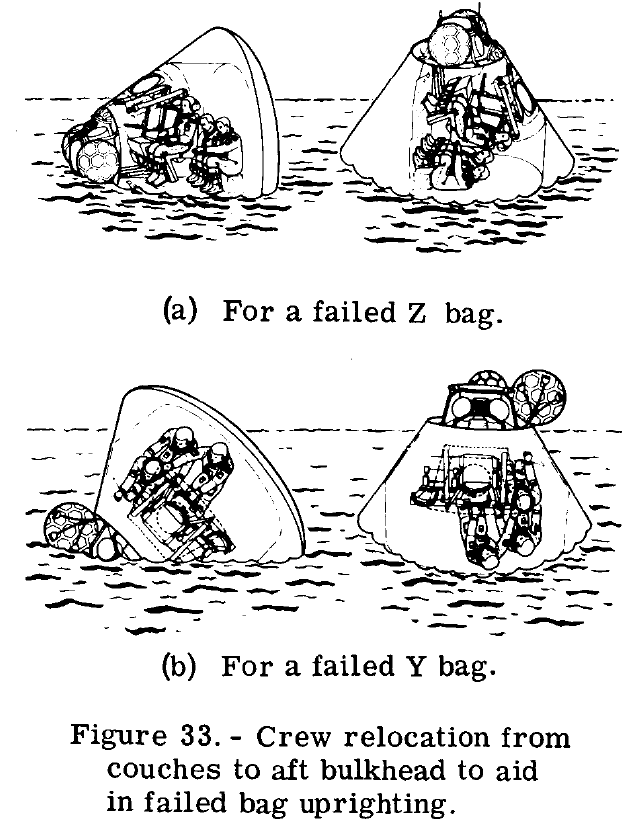 Crew relocations within the capsule were studied to be used in case of a single bag failure.

So the size of one bag was decreased to optimise uprighting performance in case of a bag failure.

But the Navy was prepared to use a plan B when all bags failed.

In 2011 a paper Simulation of the Apollo Command Module Uprighting System using LS-DYNA about computer models for the Apollo uprighting system was published.

Not the answer you're looking for? Browse other questions tagged recovery apollo-12 apollo-17 or ask your own question.

30
Why won't they recover the Falcon 9 from CRS-14?
7
Why did the number of recovery ships decrease with time?
8
Why is there no video of the first steps of Apollo 16 and 17?
4
What did the Apollo 12 multispectral Four-Camera system look like?
5
In designing the Apollo capsule, was consideration given to lashing it down?
13
Were these Apollo 14 and 15 recovery images taken (by a Navy frogman) using an underwater camera?
4
Is it the Apollo CM "flowerpot parachute attachment fitting"?
6
What is this "black box" at the top of Apollo 17 CM?
4
Did Conrad and Bean balk at entering the 650-foot-wide Surveyor Crater, or just express concern? What data had they seen?
27
Why were the Apollo 12 astronauts tasked with bringing back part of the Surveyor 3 probe?