I found a paper that says: "Let's take the task of modifying the orientation of a 700kg mass spacecraft along one of it's principal axes ; a 5 deg rotation is to be performed. It is assumed that control torque is generated by two thrusters, operated at a specific impulse of 8000s, placed at 1m from the center of mass and opposite sidea of it, firing normal to the line between them " Then the results are 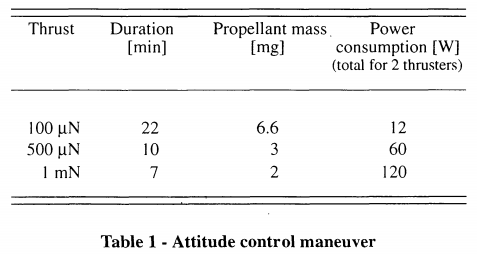 My question is, knowing the mass and the specific impulse of the thruster and the angle to rotate, how can I get the necessary thrust for a certain time?

This paper is a sizing exercise, made before the thrusters in question had been flown on any spacecraft. The moment of inertia can be backed out from the numbers in the article. Given the bang-bang control scheme used in the article, the relation between angular acceleration $\dot \omega$, firing time $t$, and angular change $\theta$ is $$\frac12\dot\omega\left(\frac t2\right)^2 = \frac12\theta \quad\Rightarrow\quad\dot\omega = \frac{4\theta}{t^2}$$ The torque is related to angular acceleration via $$I\dot\omega = \tau \quad\Rightarrow\quad I = \frac{\tau}{\dot\omega} = \frac{\tau t^2}{4\theta}$$

It appears to be a cubical spacecraft with edges that are two meters long and with all of the mass on four faces of the cube; the top and bottom faces have negligible mass. The axis of rotation is about the axis passing through the middle of the top and bottom faces. The thrusters are at the center of opposite side faces. This gives a moment of inertia of $933\,\text{kg}\cdot\text{m}^2$ about the rotation axis of interest. Since this is a sizing exercise, it makes sense to round this up to $1000\,\text{kg}\cdot\text{m}^2$.

Not the answer you're looking for? Browse other questions tagged orbital-maneuver attitude or ask your own question.

25
Delta-V chart mathematics
9
Coordination of RCS on Apollo CSM/LM
3
Star Tracker And Absolute Attitude
3
What is the difference between dual-spin spacecraft and hybrid(attitude control) spacecraft?
5
How exactly was Apollo CSM attitude changed (from a current one to a new required one)?
2
Maneuver in the intersection of 2 orbits
2
GEO Satellite Eccentricity Maneuver