Is there any website which shows Perseverance live / current position relative to earth or sun ?

(Because i couldnt find any so far)

This is a great question! Hopefully there will be more answers, but I can think of two websites and one App that sort-of meet your specification but may not be exactly what you are looking for.

DSN NOW is truly LIVE when M20 is showing

The second one (listed first because it's kind-of cool) is NASA JPL's Deep Space Network DSN-NOW; https://eyes.nasa.gov/dsn/dsn.html It is not exactly what you want and it will only occasionally display the Mars 2020 Mission as M20 when communication is happening LIVE! At the moment that I'm writing this M20 shows on Goldstone's DSS24 with a status of "Setup / Teardown / Tracking". If it was communicating real data LIVE! you'd see a squiggly line coming out of the dish and you would be able display not only the distance but the direction in real time, and while the directions are not super-accurate ways to get the position they're close, and did I say they were LIVE!?

If you go to EYES and M20 is not there, you can poke around in their extensive log of contacts for all of the Deep Space Network. Understanding the information contained in the Deep Space Network XML data? and answers there give some url's and Python scripts to read them. You can write a script to sparsely sample .xml's (say spaced in 15 minute increments for one day) and then if you find a region of time where the M20 spacecraft code appears you can look further.

NASA JPL's Horizons is a very accurate and reliable prediction.

The first one I can think of is Horizons because I can to there any time and find out where Mars 2020 is almost certainly going to be. It is LIVE in the sense that you can get the position of Mars 2020 (Perseverance) right now as well as times in the future and the past. Since it's an ephemeris and NOT a live measurement, if the spacecraft suddenly fired up its engines and changed course all by itself, that would absolutely not show at all, until some time later when they'd remeasured, recalculated, and then updated the ephemeris. But since that's not likely to happen, you can pretty much think of it as live, in a sense.

Here is a Horizons tutorial and here is where Mars 2020 is at 14:25 UTC when this answer is posted

There are now several automated ways to get state vectors from Horizons. While How exactly to use astroquery.jplhorizons to get the state vectors of Mercury and the Parker Solar Probe? remains unanswered, there may be eve better ways.

The page https://eyes.nasa.gov/ has a big button in the middle that says "Download the APP to get Started" and since I don't have it running anymore I can't say for sure if Mars 2020 is there or not. If it isn't already, it will be. It's a lot of fun, at least at first. When I ran it before it used to make the fan in my laptop run which I could never figure out why, but if you like video games at all you will probably really enjoy it for a while at least.

Appendix 2: Screenshot of what DSN NOW looks like when Mars 2020 is mentioned (as M20): 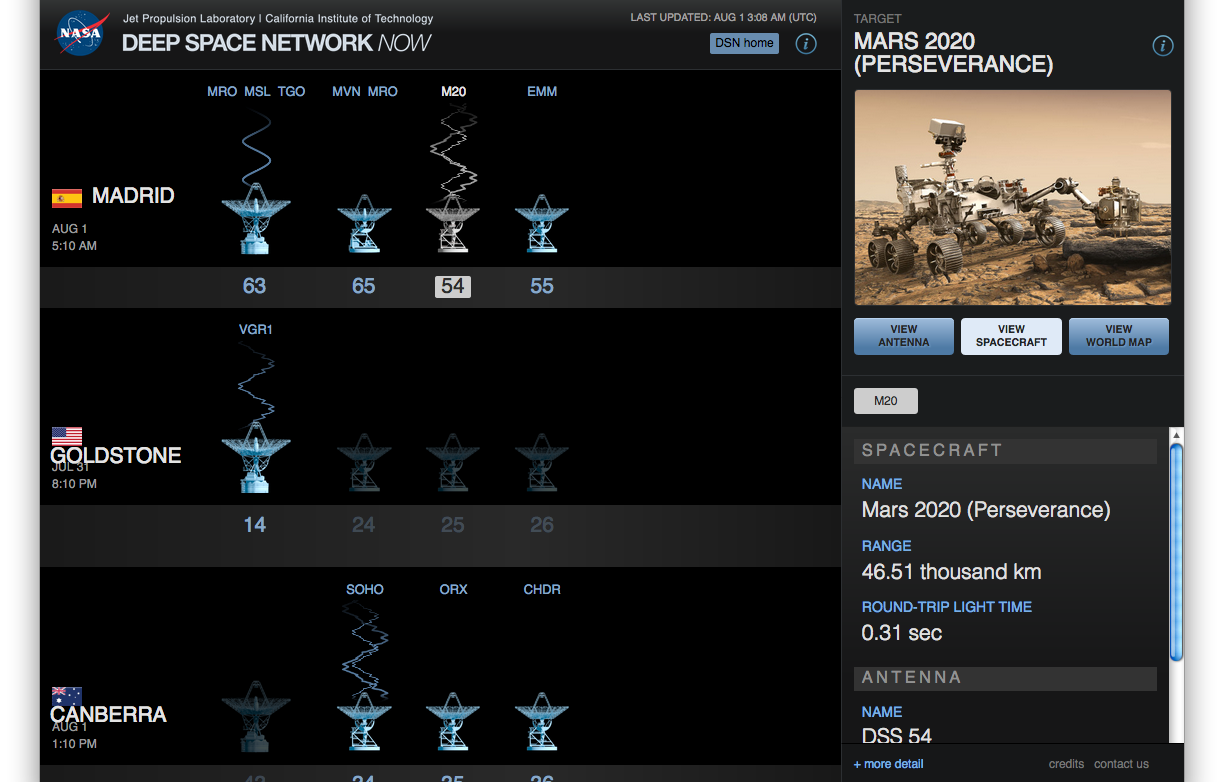 Now that it has landed, a good place to go if you want the position of Perseverance is this page. It shows the rover's tracks on a map of Mars. You can see the date and the location of each traverse.

The official NASA tracking site for such things, at least the public outreach side, is called NASA Eyes. You can find the site here. If there's demand, I might make my own tracker, but...

EDIT: I ended up doing my own tracker. Enjoy!

9
Getting state vectors from JPL Horizons ephemerides
4
Understanding the information contained in the Deep Space Network XML data?
6
China, UAE and US all sending missions to Mars in 2020 (Summer of L̶o̶v̶e Mars); how far apart are their frequencies?
5
What is the equivalent of Curiosity's "MSL" in the context of Perseverance? What's the official name of the mission? Are the distinctions similar?
3
Will the Emirate Mars Mission, Tianwen-1 and Mars 2020 Mission get closer to each other or spread out on their way to Mars?
2
How exactly to use astroquery.jplhorizons to get the state vectors of Mercury and the Parker Solar Probe?

0
Could two space ships, traveling at different times, pass through the same space?
4
How far will Curiosty be removed from Perseverance?
6
How tall are the "cliffs of the delta" in the Perseverance rover's landing ellipse?
1
Why does the Perseverance Rover do sample caching?
4
Are there any illustrations/animations which show how Ingenuity is stored on Perseverance & how it is perpared for launch?
7
Difference between "mafic floor" and "olivine-bearing floor" in Jezero crater? (Perseverance landing site)
2
Are the Perseverance rover's "drivers" working on Martian sols or Earth days right now?