Is there a risk that re-entering capsules or other components will hit ships or islands?

How precisely can the splash-down point of re-entering capsules (from Mercury onwards) be known in advance? Wasn't there a risk that capsules would hit a ship or an island?

Likewise, Russian and Chinese capsules that re-enter on dry land seem to have a risk of landing on a house, tree, cliffside, river, or other inopportune spot. On land, there are a lot more potential obstacles.

The same could be asked about rocket components falling to the sea or about military test missiles. For these, there might be a lot a lot less precision. How well is the landing spot known, and that are the risks of hitting something?

The converse question: Does the predictability of the landing always allow recovery boats to be close enough to reach the capsule in a few minutes? Is there a chance that that won't be possible?

From Apollo by the Numbers we can see that even in the 1960s and 1970s the splashdown point was quite predictable.

Note that the Apollo capsule was actively flown during entry by rolling the lift vector.

I have no reason to suspect that in the 2020s it would be worse, assuming active control of the capsule.

An emergency deorbit to an unplanned site is quite another case and could end up landing anywhere along the path of the capsule's orbit. As @MSalters points out, that's limited by the orbital inclination.

According to russianspaceweb.com, there are a set of large, pre-selected landing sites for the Soyuz capsules.

Soyuz can land with an accuracy of only 28 kilometers, (with a probability of 0.9997), in the automated aerodynamic descent mode, AUS, relative to the center of the projected landing area.

The main reason for such a low precision is the suseptibility of the parachute landing to winds. Moreover, in case of a ballistic return, the capsule can end up as far as 600 kilometers short of the primary landing site for the aerodynamic mode.

As a result, all Soyuz landings have to be planned over a flat and open areas without any structures, rivers or even trees. A total of 13 areas currently meet all the requirements for the Soyuz landing. Ironically, all of these sites are in Kazakhstan and none of them are in Russia.

The website also lists seven of the potential landing sites; but I would take these coordinates with a grain of salt, since the first one is awfully close to the Volga river and the second one is smack in the middle of the village of Peschanoe.

See also How close to a building has a Soyuz landed?

Undesigned reentry can be rather imprecise. Taco Bell made a sizeable bet on this imprecision. The Progress M1-5 deorbit of Mir had relatively large location uncertainty. (This was a controlled reentry of a device that was not designed for reentry. Consequently, its performance during reentry was, at best, only approximately understood.) 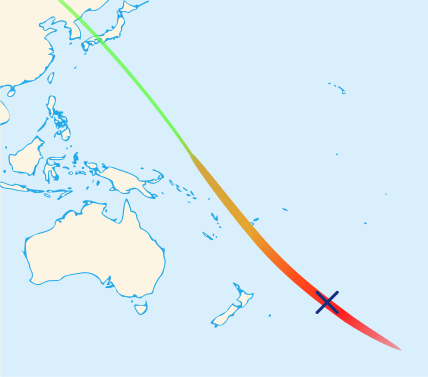 The "X" marks the estimated point of main debris impact. Red indicates expected debris impacts. Green is the track of the final orbit and orange is an estimate of the region above which the device entered the atmosphere (the entry interface). "The debris spread about ±1,500 kilometres (930 mi) along track and ±100 kilometres (62 mi) laterally ..." (from Wikipedia: Deorbit of Mir -- the source, having more details and figures). Notice this is an area of $600\,000$ square kilometers.

The probability of hitting a ship in the ocean is very small. Ships are tiny compared to an ocean. 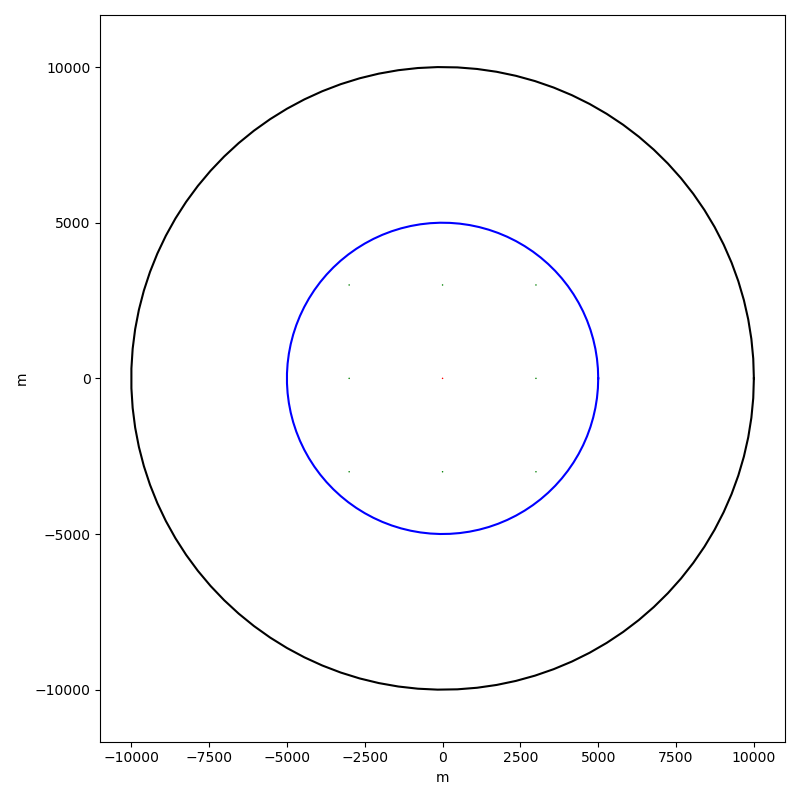 I assumed a landing zone (blue circle) of 10 km diameter. The black circle is a security zone of 20 km diameter.

There are nine ships hidden in the forbidden landing zone. The ships are drawn as a filled circle of 50 m diameter. Do you see those tiny (8 green and 1 red) spots? The red ship is located in the center of the circles.

We assume the capsule will land with a probability of over 99 % within the landing zone. What is the probability of hitting the red ship in the center?

Not the answer you're looking for? Browse other questions tagged reentry landing entry-descent-landing or ask your own question.

9
How do we control a Reentering Capsule in the denser part of the atmosphere?
10
How close to a building has a Soyuz landed?
7
Why did the number of recovery ships decrease with time?

13
Reentry without pressure suits in Apollo: was there a formal risk assesment?