How is the space probe powered to travel a huge distance in a deep space mission?

As of March 2019, the New Horizons space probe was about 4.1 billion miles (6.6 billion kilometers) from our planet (Earth) and traveling deeper into the Kuiper Belt at nearly 33,000 miles (53,000 kilometers) per hour. I am not sure if New Horizon traveled this huge distance into deep space by spending its fuel continuously or intermittently.

Chemical propulsion is only used extremely sparingly. Since there is no air resistance in space (or, only negligible resistance due to trace gases and solar winds), the probe continues to move.

Absent any gravitational influence, the probe would continue in a straight line, forever. This is what the first three of Newtons laws tell us, especially the first.

You need about 9400m/s of delta-v to reach LEO. And according to some napkin math, about 6600m/s to reach Jupiter. For further out, you need even more. Almost all of this delta-v is provided by rocket the spacecraft is launched with. In fact, new Horizons was launched with 16.26 km/s, becoming the fastet object ever launched from earth.

For comparison: New Horizons itself has a delta-v budget of 290m/s (or 0.29km/s) of delta-v available on itself, as it only carries ~77kg of fuel. That is less than 2% of the delta-v budget. The other 98% come from the launcher.

Further velocity can be gained by gravity assists. These maneuvers require very little delta-v, but need a lot of planning and require the planets to be in the correct position - they need to be in alignment. Thus, utilizing gravity assists requires patience. This is why the Voyager missions were rushed so quickly. The alignment that offered them the opportunity to visit all outer planets except Pluto at once. This alignment only occurs every 175 years.

All this is to say that space probes do not use fuel continuously, but only very small amounts of fuel, very intermittently. Practically all velocity is gained at launch and by gravity assists, the on-board fuel is for course corrections and attitude control only.

Ion propulsion on the other hand changes this, a lot. Ion engines can in fact provide large amounts of thrust and do so over large timespans - weeks & months, often even totaling times in years (compared to minutes for chemical propulsion). The Dawn spacecraft changed it velocity by 11.49 km/s over the span of 5.9 years.

However, due to the incredible low thrust, ion propulsion is not suitable for every kind of mission. It also needs a lot of electrical energy to work. While demonstrated to work in 1964 and used since the 70s for station keeping in earth orbit, it only became used for deep space missions at the turn of the millennium, with Deep Space 1 in 1998 being the first spacecraft to use it.

Other answers have already mentioned the types of thrust that a space probe can use to increase/decrease velocity, or to adjust course. I'll mention one other source of velocity that allows space probes to travel at huge speeds of tens of thousands of miles per hour - that is the earth itself. The earth travels around the sun at around 67,000 mph. Anything on the earth, or that goes into orbit around the earth, or that heads into space from earth, gets a "head start" simply by having started from a location that already has high orbital velocity. The New Horizons space probe is normally slowing down as it gets further from the sun, much like a ball thrown into the air slows down as it rises. The space probe didn't have to accelerate up to its current speed of 33,000mph, it actually started with a much higher speed relative to the sun and has been slowing down since then.

You'll notice a spike in velocity graph below at the Jupiter flyby, which is a means of using a large body's orbital momentum to increase speed. Because the earth and Jupiter have such a huge amount of intertia compared to a space probe, it is very desirable to sap some of that energy to get a boostin velocity "for free" (although it does slow down the planet by a negligible amount). 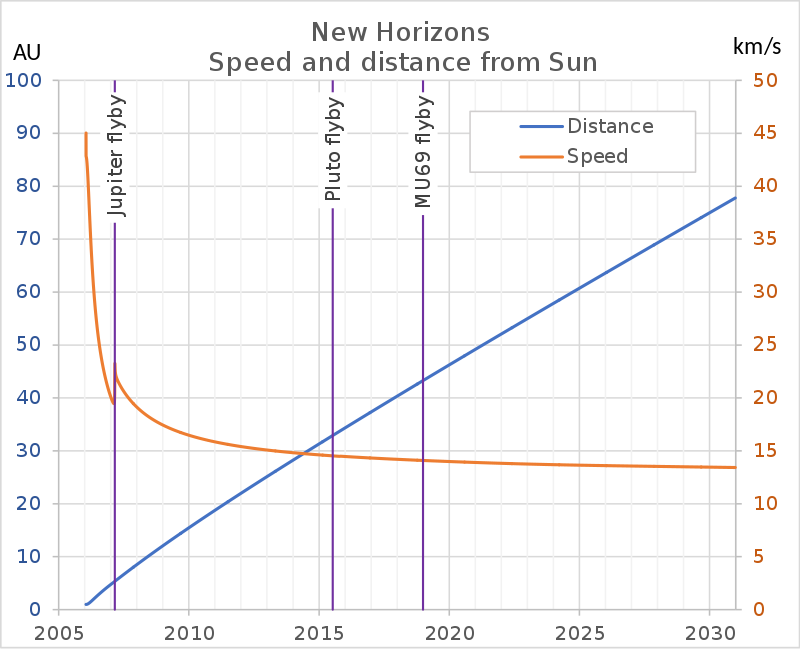 Like most Probes (all except the ones with electric engines) New Horizons is launched into a trajectory allowing the probe to get to its target nearly unthrusted. Nevertheless smaller corrections of the trajectory are needed. This is not to "re-thurst" the probe, but to assure the correct path of the probe and its attitude.

(Important quotes from the linked Wikipedia-Page:

Combined, these burns successfully sent the probe on a solar-escape trajectory

...controllers guided the probe through its first trajectory-correction maneuver [...] controllers performed [...] the last of three scheduled course corrections [...] Further trajectory maneuvers were not needed until [...] followed by another TCM ...

Not the answer you're looking for? Browse other questions tagged orbital-mechanics probe deep-space or ask your own question.

5
Can a single-apparition comet be used to propel a deep space probe outside of our solar system?
21
How precise must be the antenna orientation to communicate with a deep space probe?
4
When sending a probe to Mars, how is the optimal travel path calculated?
5
How bright is starlight in deep space?
29
Why are probes that tend to explore outer system always launched to go outwards instead of straight upwards or downwards?
3
What's the highest heliocentric inclination achieved by a deep space probe, without using the outer planets?
1
General overview of how deep space communications performed
2
Venus probe with refrigerated electronics powered by an RTG (more like the Mars rovers)