What is the formula for the gain factor of a ferromagnetic core for a torquer coil rod?

I am an undergraduate who is currently designing an actuation system for a CubeSat, more specifically a PCB magnetorquer. (with 2 ferromagnetic core coils and one air core)

I made an excel sheet that helps me determine the magnetic dipole moment and more from some sets of data including the size and material the core is made of. The material of choice is permalloy.

I supposed it is known that the magnetic dipole moment is a function of the intensity of the current, the area of the core , the number of turns AND the gain factor $K$:

where $N$ is the number of turns, $I$ is the current value and $A$ vector cross-sectional area of the solenoid.

Unfortunately, I found little information online about this gain factor which is taken as $K=1$ for an air core coil, but it varies between values of 100 and 300 for a ferromagnetic core, depending on the length and diameter shape factor and permeability of the material.

That is all that I've found online about this gain factor and it is the reason why I am asking you guys to provide a general formula of this factor or at least its value for permalloy.

Another thing that is worth mentioning is that I had a conversation last year about this value with an academic researcher and confirmed me the existence of it, but we did not further developed on the subject.

The thesis where I found this "K" value: Design optimization of the CADRE Magnetorquers by Duncan Miller at U of M Ann Arbor, May 2, 2013 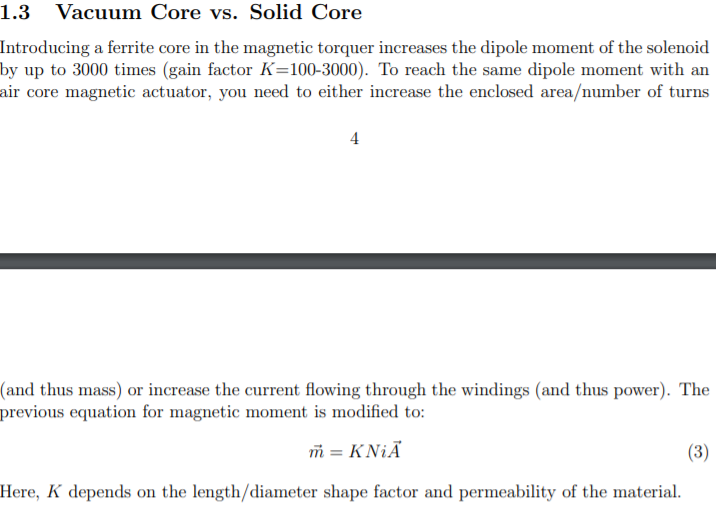 Okay, so I've asked around and I received an answer: Yes, $K$ has no general formula. I do not have the exact steps, but it goes as follow: the local demagnetizing factor must be integrated with respect to the volume. This factor depends on the position of each element of the core reported to the winding, therefore there is no simple analytical answer.

For an approximation, as @uhoh stated in the comments, there is a general formula assuming uniform magnetization that I used in my calculations. That equation in its general form is:

Where $N_d$ represents the "total demagnetizing factor" and $μ$ is the relative permeability of the material.

For a cylindrical-type core with a length of $L$ and radius $R$, the $Nd$ is:

Not the answer you're looking for? Browse other questions tagged adcs magnetorquer torque electromagnetism or ask your own question.

2
Ways to measure dipole moment of magnetorquer
1
Are there any modern cubesats or smallsats that have relied only on magnetotorquers for attitude control?

2
Ways to measure dipole moment of magnetorquer
4
Relation between air-core and ferromagnetic solenoid -core magnetorquers and measurement of dipole moment
4
How do we manage the residual magnetic moment of magnetorquer with a ferromagnetic core?
6
What type of Kalman filters are preferred for satellite ADCS systems; what are the tradeoffs?
3
What were the relative orientations of the Hubble Space Telescope's three star cameras, six rate gyros and four reaction wheels optimized for exactly?