Has ChemCam been used to characterize the martian atmosphere?

Laser-Induced Breakdown Spectroscopy (LIBS) can be used to measure the composition of a solid, a liquid or a gas.

LIBS is the technology used in ChemCam of the Curiosity rover and in the SuperCam of Perseverance. It is routinely used to study rocks, but has it ever been used to measure the composition of the martian atmosphere? If not, why not?

It can't really detect the atmosphere, the atmosphere doesn't reflect back much light. There is a much better tool for characterizing the Martian atmosphere on Curiosity, namely SAM. It will breath in the atmosphere, concentrate it, and then use lasers to identify what is there. This process works quite well, and as the atmosphere mixes pretty quickly would be better than using a laser that is external to the robot.

I've just asked How does Mars rover Curiosity's ChemCam's infrared laser produce a 100,000 K plasma plume (kT = 8.6 eV)? in Chemistry SE so you can probably tell how this answer will unfold.

The key to producing significant emission of visible and UV photons from material is to excite at least some atoms to many electron volts of energy. 240 nm for example corresponds to about 5.2 eV, but each photon in ChemCam's 1064 nm pulsed laser beam only has an energy of 1.16 eV. In order to produce a rich UV-Vis spectrum for analysis the laser needs to produce a "hot mess" of material.

This happens when the infrared beam hits a solid, high density target. It doesn't happen to any great extent in "mid-air" unless there's a dust storm, and at those times you might want to hunker down rather than perform analytical chemistry.

The other thing that has to happen is that the plasma plume needs to be at the focus of the large aperture light collection telescope.

If you look at ChemCam there's a laser beam shooting out from the center of the "eye" and a giant pupil (telescope) to collect the emitted light. The telescope has an 11 cm diameter aperture and is carefully focused on the spot where the laser hits the sample in order to put all of the light it collects into one end of an optical fiber.

The fiber is then routed to a high-resolution UV-Vis spectrometer (resolution as low as 0.9 Angstroms). 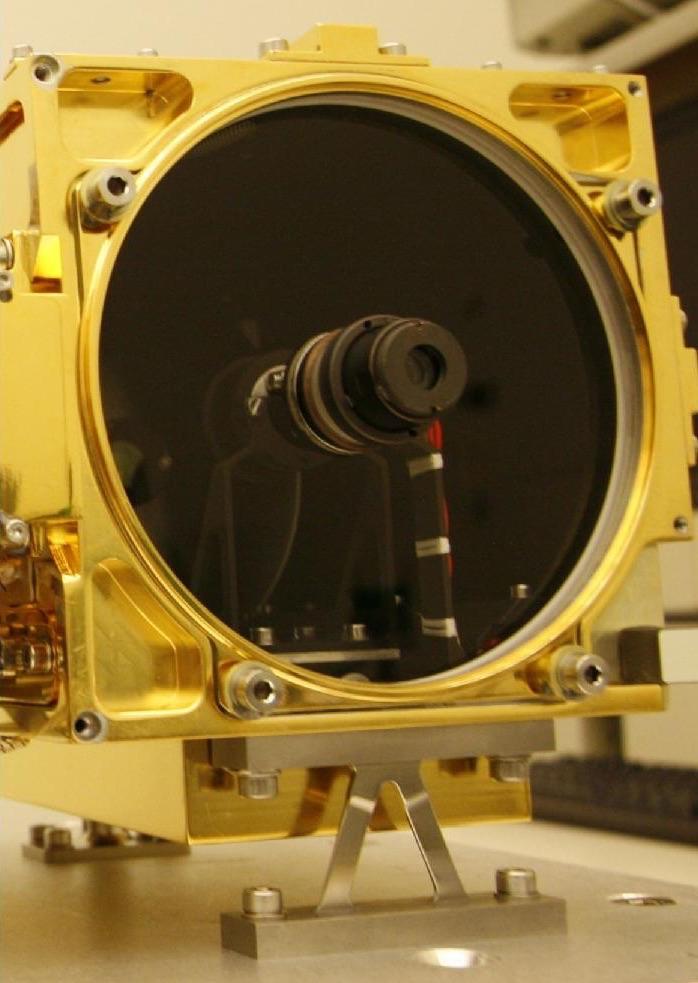 The LIBS instrument uses powerful laser pulses, focused on a small spot on target rock and soil samples within 7 m of the rover, to ablate atoms and ions in electronically excited states from which they decay, producing light-emitting plasma. The power density needed for LIBS is > 10 MW/mm^2, which is produced on a spot in the range of 0.3 to 0.6 mm diameter using focused, ~14 mJ laser pulses of 5 nanoseconds duration. The plasma light is collected by a 110 mm diameter telescope and focused onto the end of a fiber optic cable. The fiber carries the light to three dispersive spectrometers which record the spectra over a range of 240 - 850 nm at resolutions from 0.09 to 0.30 nm in 6144 channels. The spectra consist of emission lines of elements present in the samples. Typical rock and soil analyses yield detectable quantities of Na, Mg, Al, Si, Ca, K, Ti, Mn, Fe, H, C, O, Li, Sr, and Ba. Other elements often seen in soils and rocks on Earth include S, N, P, Be, Ni, Zr, Zn, Cu, Rb, and Cs. It is anticipated that 50-75 laser pulses will be required achieve the desired 10% accuracy for major elements at 7 m distance.

LIBS operates by focusing the laser onto a small area at the surface of the specimen; when the laser is discharged it ablates a very small amount of material, in the range of nanograms to picograms, which generates a plasma plume with temperatures in excess of 100,000 K. During data collection, typically after local thermodynamic equilibrium is established, plasma temperatures range from 5,000–20,000 K. At the high temperatures during the early plasma, the ablated material dissociates (breaks down) into excited ionic and atomic species. During this time, the plasma emits a continuum of radiation which does not contain any useful information about the species present, but within a very small timeframe the plasma expands at supersonic velocities and cools. At this point the characteristic atomic emission lines of the elements can be observed. The delay between the emission of continuum radiation and characteristic radiation is in the order of 10 μs, which is why it is necessary to temporally gate the detector. 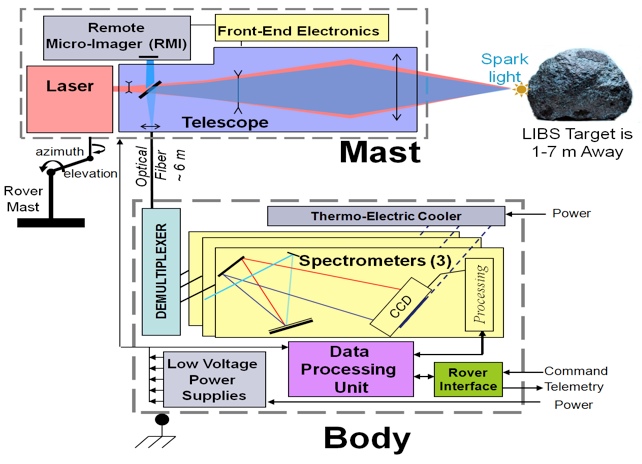 Not the answer you're looking for? Browse other questions tagged mars curiosity perseverance or ask your own question.

13
Do Mars rovers protect optical windows during dust storms? Do they “avert their eyes” or do they just “grin and bear it”?

57
Curiosity: Why did they “reinvent the wheel” instead of using pressure tires?
8
Is there a meteorite from Earth on Mars?
1
Magnetic Memory to Mars?
7
Can a machine process and run on $CO_2$ and $H_2O$ for an $O_2$ by product?
10
Methane on Mars - Can we locate the source?
2
NASA's Curiosity Rover - Carbon Isotope Ratio of Methane?
33
Is it possible that Curiosity Rover measured its own methane or failed doing the spectrometry?
3
Will MOXIE get clogged or chemically degraded by martian dust?