I haven’t been able to find a definitive number for the thermal output (in watts) of the MMRTG used aboard the Perseverance rover. The numbers I’ve seen range from 1950 watts to over 2000. I also haven’t found a reliable number for the electrical output either. Some sources say 110 watts, some 145 and others 120.

A lot of sources contradict each other and even some NASA documents can’t seem to agree on a number. The only reliable number I’ve seen is that it has a minimum life time of 14 years.

Some of the articles I looked at -

This article from the Office of nuclear energy

Wikipedia has some facts about Plutonium: 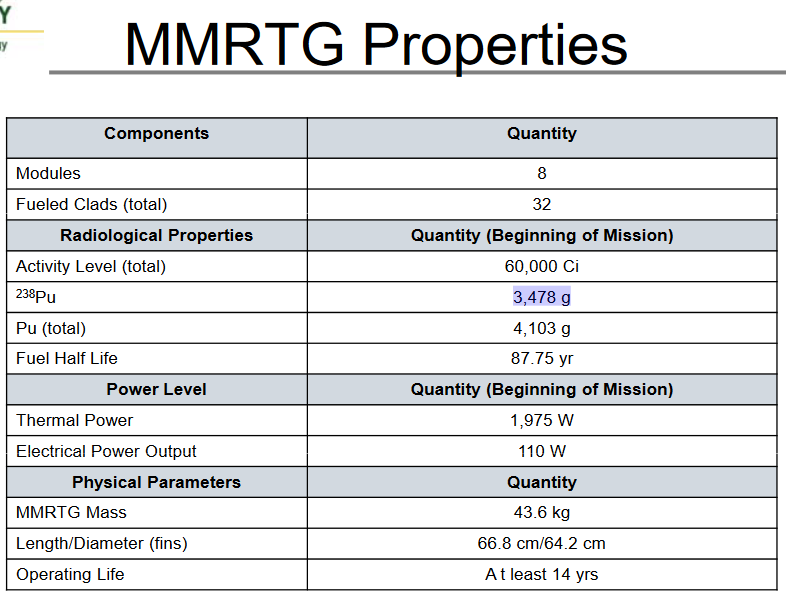 There was an early design goal for the MMRTG of 125 W electrical power. For the rovers Curiosity and Perseverance both :

approximately 110 watts at launch with little decrease over the mission time are specified.

Not the answer you're looking for? Browse other questions tagged nasa perseverance rtg or ask your own question.

12
Do nuclear batteries emit radioactive rays while in use by satellites and shuttles?
18
If the space shuttle computers all output contradictory commands, how is it chosen?
9
Which countries have built RTGs and used them in Earth orbit and/or beyond?
4
How can I know if NASA Horizons output is measured, calculated, estimated or what-else?
1
Why did Voyager have to shunt unused electrical power and radiate as heat?
13
Now that Perseverance is “hot” (RTG in place) and before it gets to deep space, how will it stay cool?
8
Why first 2 images of Perseverance (rover) are in black and white?