How was each Space Shuttle contingency rescue missions numbered?

Reading the wikipedia article on STS-3xx, I noticed that the numbering does not seem consistent.

Space Shuttle contingency rescue missions were all numbered in the 300s with the exception of STS-400, as that was a special case.

STS-300 and -301 seem to have been numbered sequentially as the first contingency missions.

STS-300 (Atlantis) was planned for both STS-114 and STS-121 (both Discovery). This numbering also skipped 5 regular missions which ended up happening later, two of which were also by Discovery.

STS-317 and -318 seem to have been numbered after the mission their crews and orbiters were planned to fly. (If STS-117 had needed the contingency mission, a subset of the crew of STS-118 would have flown as STS-318 to rescue STS-117)

But after that the numbers seem to go a bit astray.

The orbiters assigned aren't always the same as the regular missions that share the last two digits too.

How were the numbers and orbiters of the contingency missions assigned?

Here is a mission designation table for STS-3xx flights, taken from Wikipedia

Here's an example of how that worked out, using a manifest dated November 2006.

This chart has a horizontal line for each Orbiter. The date shown above the blue Orbiter symbol is the planned launch date. Time progresses left to right across the charts.

The little orange Orbiter is the rescue mission that would take place if the launch before it needed to be rescued. 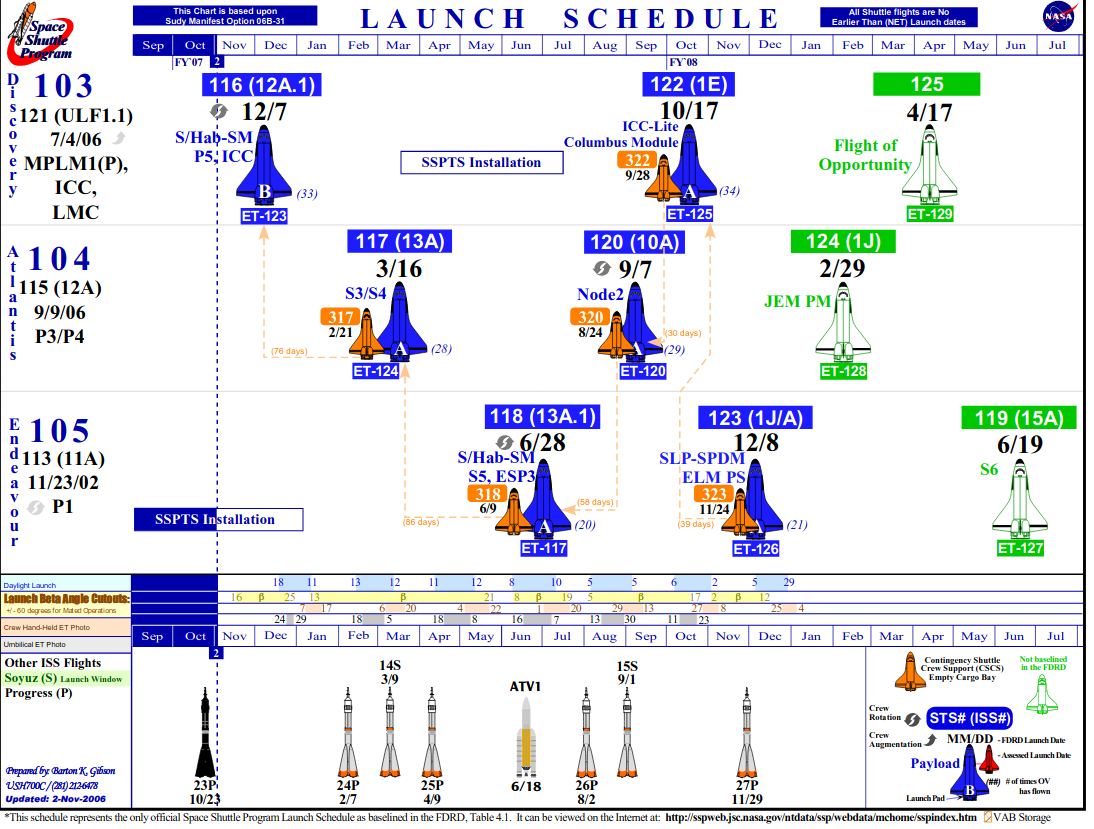 So we can see that for STS-116, the next scheduled mission was STS-117. Thus the orange rescue mission is STS-317, and the orange dashed line points to the mission it would be rescuing.

Moving down the line:

The chart in the question contains some obvious errors and omissions. STS-120 could not have rescued itself! And several missions are not listed at all - 126 through 133.

Not the answer you're looking for? Browse other questions tagged space-shuttle planning or ask your own question.

11
How were the Space Shuttle missions named?
15
How many people have returned to Earth in a different type of vehicle than the one that launched them into space?
5
What military forces provided Space Shuttle search and rescue?
12
How was the airlock installed on the Space Shuttle mid deck?
10
Why did Columbia’s planned flight manifest have a five-year gap with absolutely nothing in it between 2004 and 2009?
13
How was the space shuttle fuelled?
7
Why was the shuttle landing crosswind limit reduced for longer missions
27
What were the differences between the STS Orbiters?
19
How 'space ready' was space shuttle prototype Enterprise?
2
Space Shuttle missions for satellite deployment?