Is this soot building up on the Falcon 9 interstage?

In the below video of stage separation during Falcon 9's CRS-19 mission, the exhaust of Stage 2's Merlin 1D-Vac impinges on the interstage. It also deposits a black substance on the white paint.

Is the black substance soot from the Merlin's turbopump exhaust, or something else?

Is this soot building up on the Falcon 9 interstage?

Partial, speculative science-based answer: It certainly could be!

Many details of soot formation chemistry remain unanswered and controversial, but there have been a few agreements:

Soot particles take time to form. Carbon-based soot starts out as large carbon-based molecules that naturally have a strong affinity for each other. You can say that they have a reasonably large sticking coefficient when they come in contact with each other. Over a short period of time they grow from a few molecules to a tens of nanometers, and they can potentially grow as large as several microns.

While charged molecules quickly neutralize, once you have a dielectric particle with thousands or millions of atoms, it can more easily retain a charge because they can now have a much smaller mass-to-charge ratio (say one charge unit per million AMU just for example)

Once charged, they can be attracted to and stick to other surfaces like a balloon rubbed on one's head or one's cat will stick to a wall, and once stopped in contact with the wall, some combination of static charge and normal Van der Waals forces will keep them there.

The delay represents the time it takes the precursor molecules in the low-density plume to encounter each other enough times to form particles that are large enough to be black. Since the darkening happens near the opening only, we have to assume that the soot forms in transit when the 2nd stage is far enough away that there's time for soot to form.

Since the interstage is mostly a closed volume one might try to argue that they bounce around inside it, but even at thermal velocities (300 m/s) it would empty in tens of milliseconds, not the several seconds we see in the video.

It is also possible that the molecules have a sufficiently large sticking coefficient to the walls to build up themselves, but that would not be responsible for the blackening of the walls.

A container of benzene or even large molecules like RP-1 on the other hand is nearly transparent, at least on the scale of microns. A thin uniform layer of precursors would stay mostly transparent, but when they coalesce into carbon-rich particles they can absorb light and therefore darken the inside walls of the interstage. 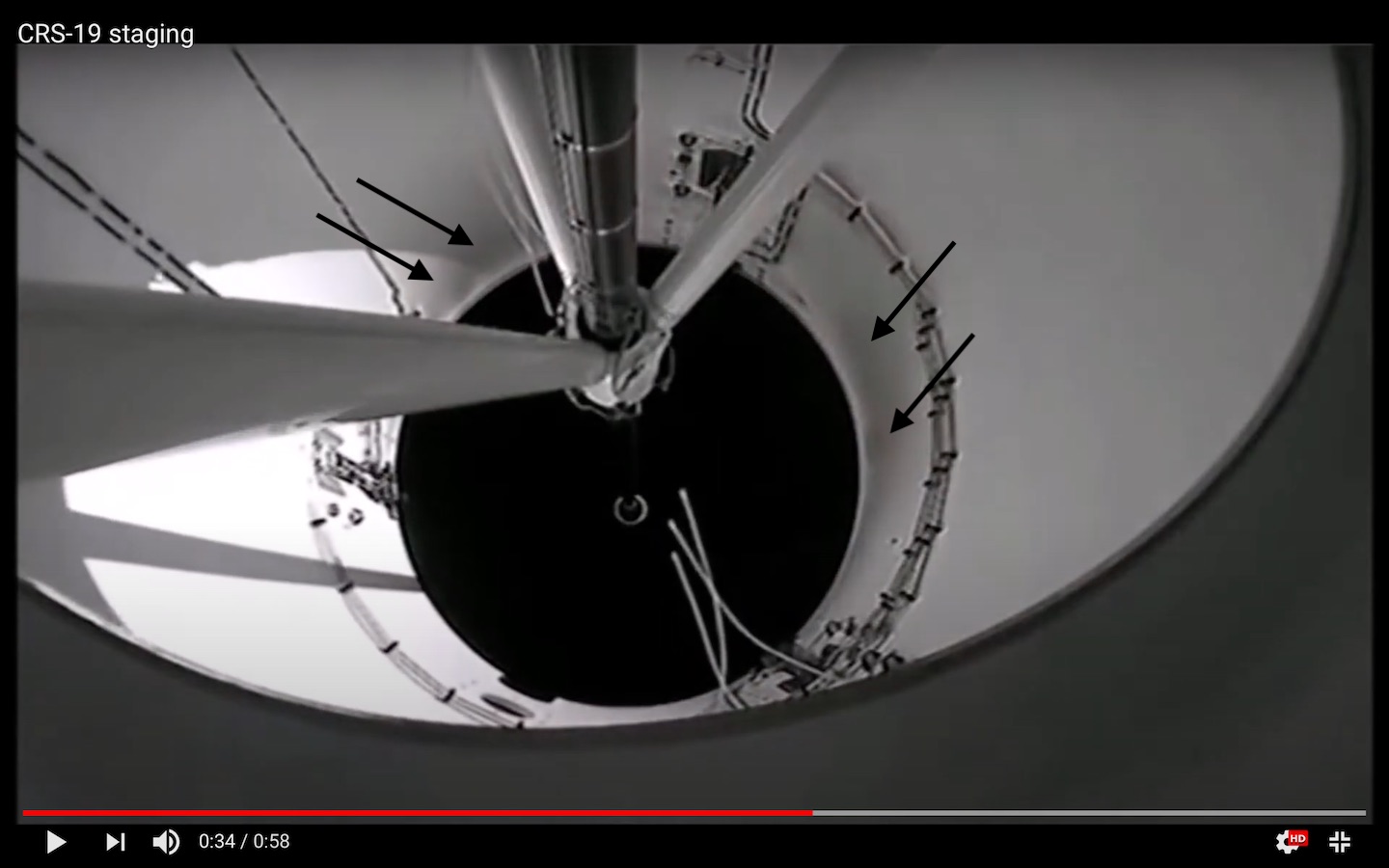 Not the answer you're looking for? Browse other questions tagged spacex falcon-9 merlin-1d turbopump or ask your own question.

6
Was any first stage recovery system tested on SpaceX Falcon 9 flight seven?
8
Why did the RCS thrusters on Falcon 9 fire in the wrong direction?
10
What is the cause of the blue light from LH2/LOX rocket engines?
2
Why is the Merlin 1D Vacuum nozzle bigger than the Merlin 1D nozzle?
7
To what extent, if any, does the exterior paint color of a launch vehicle affect its propellant & vehicle thermal management?
9
Why does Merlin 1D Vac turbopump drive exhaust go around the nozzle?
16
Why is the exhaust plume of Falcon 9 upper stage shaped the way it is?
5
Falcon 9 2nd stage pusher; how far does it continue to extend as it accelerates separation?
4
What are these cartridges with holes on the Dragon trunk?