What was Apollo "Moon rope" made out of? Was it ever used?

This excellent answer to Did Conrad and Bean balk at entering the 650-foot-wide Surveyor Crater, or just express concern? What data had they seen? contains several references to a 30 foot length of "Moon rope" that was available to the Apollo 12 astronauts on the surface of the Moon.

I'm very sure that this is the Lunar Equipment Conveyor.

The Lunar Equipment Conveyor (LEC) is a device which the astronauts will use during the EVA to transfer equipment to or from the ascent stage. It may also be used by the crewmen as a safety tether when moving down the ladder or as an aid in ascending to the ascent stage.

The LEC is a 60 foot continuous loop of 1 inch wide strap, which loops through a support point in the ascent stage and back to the crewman on the surface. The end of the loop is closed by two hooks, attached together 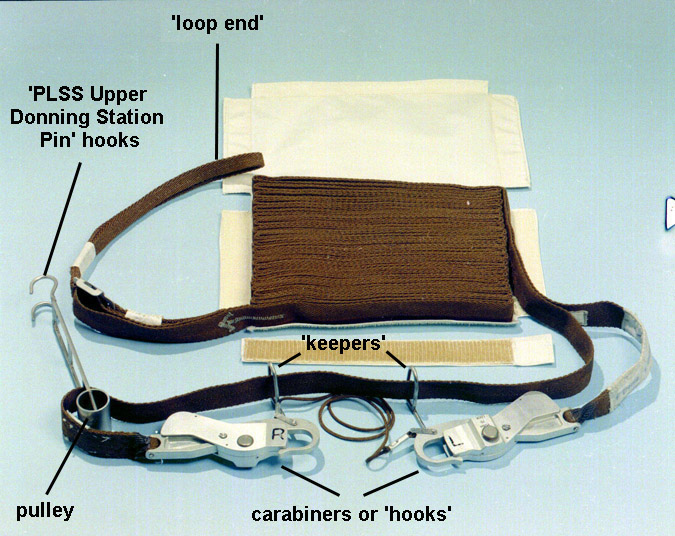 All of the references call it "webbing" or "strap material". OrganicMarble says that similar straps on the Shuttle were made of Nomex, which is most likely what was also used in Apollo. Aircraft seat belts (MIL-SPEC W-4088) are made of nylon. Here are two ads for such webbing; the latter specifies a strength of 5000 pounds at 2-inch width. Automobile-grade seat belts are made of polyester.

There were carabiners (hooks) on each end. They were intended to be connected together to form a loop 30 feet long.

No knots were intended; the carabiner hooks were enough to attach to whatever they needed.

To answer question 4 (this is mostly reformulating my comments on the question):

Was it ever used on any Apollo mission, either to haul someone out of a crater or for something else?

This conversation happened long after the Apollo program, and, as the author of the Lunar Surface Journal, I believe we can trust that Jones has listened to or read the full transcripts of the apollo missions.

Note that this does imply that every Apollo mission had the rope available.

Not the answer you're looking for? Browse other questions tagged the-moon apollo-program equipment moonwalking apollo-12 or ask your own question.

15
Just how much rope have different crewed missions been given?
4
Did Conrad and Bean balk at entering the 650-foot-wide Surveyor Crater, or just express concern? What data had they seen?
0
Two spaceships fly straight, parallel to each other, tied to each other by a rope, and pass a black hole between them. What happens to the rope?

16
What was the mascon "fix" used by Apollo 12?
14
What was this Ziploc bag used for on an Apollo 14 moonwalk?
13
Why was Apollo 12 allowed to go up in such bad weather?
6
What coordinate system was used for the Apollo missions?
6
What was the colour of the shoes used by the Apollo astronauts in moon landing?
42
Was planting UN flag on Moon ever discussed?
11
What was the temperature of the Apollo 11 moon landing zone?
5
What was the purpose of a Boyd Bolt?
11
Why was 65 volts used for ground support equipment?
4
Did Conrad and Bean balk at entering the 650-foot-wide Surveyor Crater, or just express concern? What data had they seen?