In the early 1970s, Gerald Gregorek wrote a technical note on drag for ESTES (maker of model rockets and parts from what I gather).

The note is still very popular in the model rocket community, and it is referenced in most papers written on model rockets I've encountered. Here is one link to it (please replace with a web archive link if it ever breaks).

One equation in Gregorek's note is especially popular, and that is the equation for drag from the combined nose and body tube assembly. Here it is, with some context: 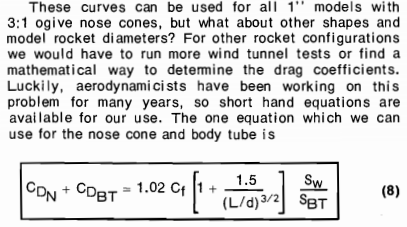 Here, CDN and CDBT are the drag coefficients due to the nose and body tube of the rocket; Cf is the skin friction coefficient, to be found from plots over a range of Reynolds numbers; L/d is the length-to-diameter ratio; and SW and SBT are the wetted surface area and the body tube reference area, with the transverse cross-sectional area assumed in the equation.

If you've struggled to calculate drag coefficients, you can see the appeal of this equation... But there is one very big problem.

Gregorek doesn't tell you where the equation comes from. There is no rationale for it (understandable, given his audience), and there is no reference for it. All the papers that reference this equation reference only Gregorek and nobody else. Presumably the equation works for some model rockets, but why?

Can anyone say where this equation might have come from? Does anyone in the aerodynamics community recognize it? I'm especially interested in the limits to this equation---when is it valid and when does it stop working? If my rocket is 200 ft high and 12 ft wide but all else is the same, will I still get an adequate ballpark figure for my drag coefficient (assuming I don't care about Mach number or angle of attack dependences, and assuming also that the Reynolds number dependence is adequately captured in the friction coefficient calculation)?

Any pointers to the true source of Gregorek's equation (or even to an alternate equation for bigger rockets) would be appreciated!

Edit to include the bits I found from Organic Marble's hugely helpful comment:

You can arrive at an expression very close to Gregorek's using the expressions given in Ch. 6 of Hoerner's Fluid Dynamic Drag book. See pp. 6-15 thru 6-19 ("Drag of Streamline Bodies"). There, Hoerner gives the total drag of a streamlined shape (like a rocket with an aerodynamic nose) based on wetted area (this matters, see below):

About the third term, Hoerner says this:

Model rockets are usually slender, and Gregorek's examples all have l/d ratios between 10 and 20, which is to say d/l ratios between 0.1 and 0.05. In this range, and given Gregorek's amateur audience, it would have made sense to drop the third term.

In fact, Hoerner later factors in the ratio of wetted and frontal areas, though the expressions he obtains seem less versatile than Gregorek's, since they involve certain assumptions about the (rocket's) streamline shape, which Gregorek avoids.

The only thing we haven't accounted for in Gregorek's equation at this point is his 1.02 multiplier, which suggests the true drag coefficient is 2% larger than that predicted by the simplified Hoerner equation... Maybe the 2% discrepancy comes from the third term he dropped, and the 1.02 multiplier is a way to correct for it. Maybe someone else has a better idea?

I don't see the exact equation that is in the question, but it looks like it's derived from equations in Chapter VI Paragraph C "Drag of Streamlined Shapes" in Hoerner 1965 Fluid-Dynamic Drag. At least, there is a marked similarity. I found similar equations (at least the same power law) in a book I own, McCormick 1979 Aerodynamics, Aeronautics, and Flight Mechanics, and he references Hoerner, as does Gregorek.

Model rockets are often not very smooth. The skin friction term comes from the laminar portion of the Cf vs Re No. curve. It is highly unlikely that model rockets have much laminar flow. Fins may not have rounded leading edges or sharp trailing edges. Surface finishes may be very rough, depending upon how much time (and skill) the rocketeer put into the finish. These are probable sources for the conservatism in the equation.

3
What's the atmospheric drag coefficient of a Falcon 9 at launch (sub-sonic, large fairing)
6
Is there a mathematical formula to calculate drag force without empirical testing?
4
Modeling a rocket using Tsiolkovsky's equation and ordinary differential equations
1
Lift and Drag of a Model Rocket
1
cross parachute - drag coefficient