Is the propulsion for the Scorpion nuclear-thermal-electric ship concept viable and credible?

Recently I've come across the proposal for the "Scorpion" spacecraft -- I originally ran across it on Project Rho (ctrl-F for it) but it looks like the article was published in the journal of the British Interplanetary Society.

I'm skeptical of the wisdom of the overall design (which is somewhat non-modular and go-everywhere, the author really wants to make a spaceship) and this question isn't about that but the engine is pretty interesting to me.

The engine uses a moderate-performance solid core nuclear reactor to heat propellant and also to drive a heat-engine (it appears that the heating of the cryogenic hydrogen propellant is part of the heat sink for this heat engine), and the heat engine output is then used to inject further energy into the propellant via an arcjet. 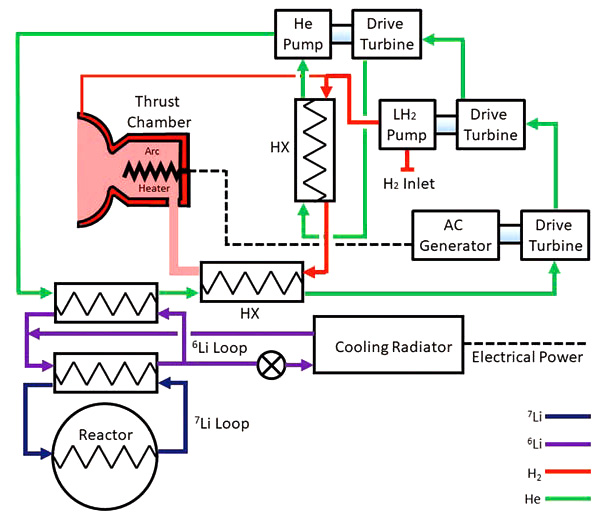 If you believe the author, this gives you a rocket with nuclear-lightbulb-like performance (1200 ISP), the ability to use the reactor for both propulsion and electric power, and a much less radical reactor design than an NTR, while having much greater thrust and less radiators (and less dependence on alpha) than a typical nuclear electric rocket.

The question is whether one should believe the author.

As with any hypothetical design, one is limited to consider if it's making some "unreasonable" assumptions.

First, one may compare the claimed performance to existing technology. Nuclear rockets were abandoned early, but the completed prototypes give some lower bound for what's possible (NERVA, RD-0410).

This isn't wishfully far from demonstrated capability, and importantly, it doesn't assume the increased thrust and exhaust velocity can be achieved on an equal mass budget, instead listing the system as bulkier.

As for "much greater thrust and less radiators (and less dependence on alpha) than a typical nuclear electric rocket", this is conceptually possible, as waste heat can be dumped into the hydrogen instead of requiring additional radiators. The obvious cost of the increased thrust and reduced cooling requirements is wastly inferior exhaust velocity compared to other electrical propulsion types.

2.) Is problematic. It's essentially the "magic device" that enables the whole system, and the author spends a single paragraph describing it!

The electrical energy produced by the latter is then used to power arc heaters in the exhaust system. This augmentation heating of the hydrogen raises the effective exhaust velocity well beyond the 8 km/sec that could be expected from a conventional nuclear thermal engine, to above 12.5 km/sec

No details whatsoever, except that it's somehow better than nuclear thermal engines.

As far as I know, nothing even close to this kind of gigawatt scale electrical heater has been demonstrated for rocket propulsion. Not surprising, since the current available power in space is typically 5 to 6 orders of magnitudes lower.

The available literature about this magic space heater doesn't seem to be large:

Scorpion’s main propulsion system is a version of the Serpent engine cycle devised by Alan Bond. The cycle uses electrical augmentation of a nuclear thermodynamic rocket; a basic concept that goes back to at least Goldsmith in 1959 [23]. The third edition of Sutton [24] devotes a paragraph to the idea, citing Goldsmith, and also Berry [25] and Rester and Rott [26]. Later editions of Sutton removed this paragraph, presumably to make room for more detailed discussion of the NERVA development work that had been undertaken between editions. But the concept was not forgotten and in 1972 Bond outlined a detailed, elegant and realisable variant on this basic principle [27]

A paragraph that got removed in later editions, and small stubs at 2-3 pages is not much to go after. Perhaps Bond's outline contains something? Because there's is nothing of substance this paper about how the engine works, only what kind of spaceship you could build around such an engine.

The question is whether one should believe the author.

About the engine's potential applied use? Perhaps, at least he's made some pages about it.

About the engine's design, workings, theoretical foundation, parameters and performance? Not so much, since there's almost nothing said about it.

It looks like the "nuclear electrothermal" concept isn't unique to the Scorpion concept.

This question covers an engine cycle which is somewhat different, apparently much smaller (based on a MITEE nuclear thermal rocket core), uses inductive heating rather than an arc for the afterburner, and has fewer separate coolant loops.

So it looks like other serious people are working on a similar idea.

Not the answer you're looking for? Browse other questions tagged propulsion advanced-propulsion electric-propulsion nuclear-propulsion or ask your own question.