How do Falcon-9's cold gas thruster maneuvers account for the center of mass changes due to “floating fuel shifts”?

The Art of Engineering video How SpaceX Lands Rockets with Astonishing Accuracy after 07:19 explains:

The falcon 9 is equipped with a total of 8 nitrogen cold gas thrusters that are mounted towards the top of the first stage. There is one pod on each side of the rocket, each containing 4 thrusters. Like the gimbaled main engines, the cold gas thrusters are used to control the orientation of the rocket. They are particularly useful for the flip maneuver after stage separation because of the large lever arm between the thrusters and the rocket’s center of mass.

They are also used to control the rocket at times during the flight when the gimbaled main engines are shut off.

While the diagram shown in the video shows the center of mass at approximately the center of the rocket, what's really happening is a little more complicated. The two liquid propellants in their tanks are in a microgravity environment and their positions are determined by their history, small accelerations and viscous and damping forces, so the effect of a given impulse by the cold gas thruster has a variable effect even if the masses of the remaining propellants are known, and is not even predictable without knowledge of their distribution along the length of the rocket.

Question: How is this problem managed? Is there an ullage-like impulse to put the propellants in a desired location, or does a computer use inertial measurements following each thruster impulse to model the instantaneous mass distribution and calculate the subsequent impulses accordingly, or is this done in more of a bang bang servo-like way without explicit consideration of the mass distribution of the liquids during the freefall segments of flight? 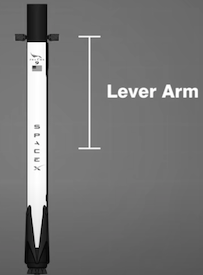 The new SpaceX video SAOCOM 1B | Launch and Landing (found in Till what altitude above earth sounds can be heard?) demonstrating that the cold gas thrusters are used in several different parts of the return, not just the initial rotation.

Browse other questions tagged falcon-9 attitude liquid-fuel adcs or ask your own question.

16
Space shuttle exhaust after landing
13
Till what altitude above earth sounds can be heard?
6
Are large halo orbits around L₁'s and L₂'s preferred over small orbits for reasons other than geometry?
7
How to optimize time of ignition for an on-orbit burn and/or coast phase on ascent?
1
Are there any other examples of right-angle exhaust diverters in spacecraft?

12
What is the minimum number of RCS thrusters capable of stabilizing a satellite against an arbitrary rotation?
5
How will GomX-4B manage angular momentum when using butane thrusters to move?
3
Help with Scott Manley's rigid body dynamics narration
5
Could the Voyager spacecraft be spin-stabilized to keep their high gain antennas pointing towards the Sun (and therefore Earth)?
3
What are Starlink's available momentum unloading strategies?
4
How does one impulsively null spacecraft nutation?
2
Mathematics behind attitude maneuver
0
Attitude control with cold gas thrusters