How much of the energy of a rocket ends up as a noise?

Rocket launches are notoriously loud. So much so that measures are taken to prevent the noise/vibrations from damaging the rocket, the pad, or basically anything else within a few hundred meters.

How much actual energy is carried away in that noise? (for the sake of specificity, in a Falcon 9 launch, but I'd also be interested in other rockets). How much extra delta-V would be achieved if that energy could be used for propulsion? Is there any way, even in theory, to do that?

The maximum percentage wasted to noise is approximately 1%.

The acoustic efficiency, defined as the ratio of the sound power to the rocket exhaust's mechanical power, for the majority of these data range between 0.2 and 1 percent...with 0.5% as the most probable value. 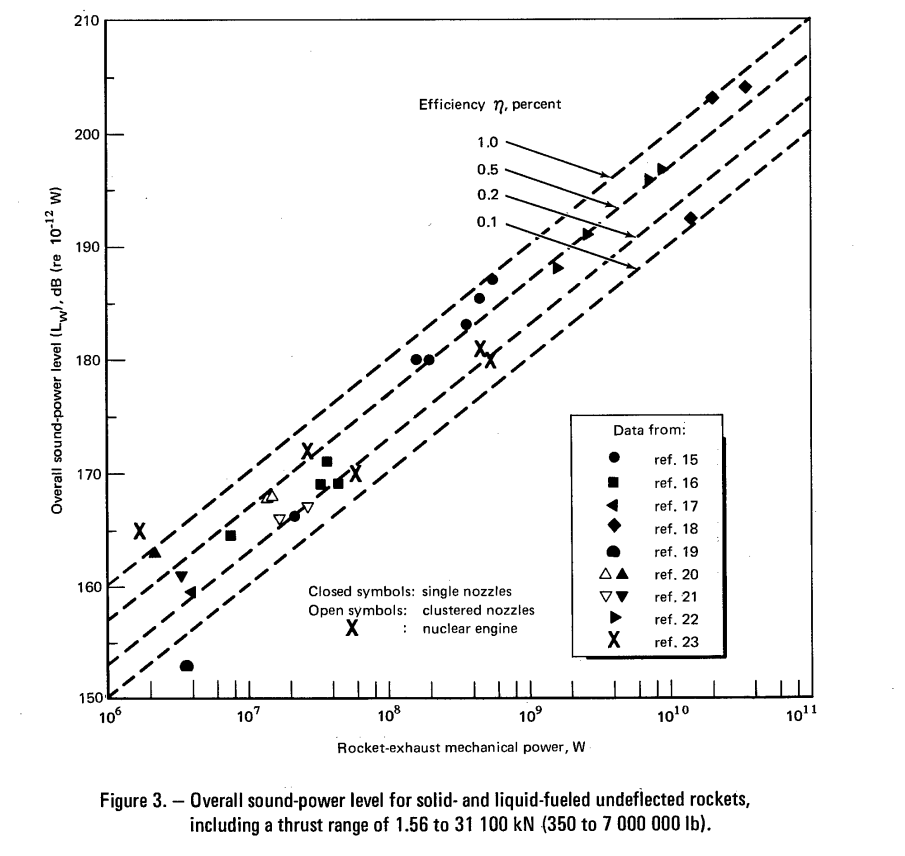 Using the equation for power given in this answer

If that 1% power loss could be utilized instead of thrown away, it would be a directly proportional gain to the product of specific impulse and thrust.

But as explained in this answer the noise is a direct result of the aerodynamics of the plume. There is no way apparent to me that would convert these losses into useful power. There are techniques to mitigate the noise (page 8 in link) but they generally work by disrupting the noise sources, not by returning the power to the engine.

Of the the 0.2% to 1% of energy that is generated as sound, most of the sound is generated well after the exhaust gases have fulfilled their purpose of thrust:

As a crude analogy, imagine being on roller skates, then taking a bowling ball and throwing it. You will roll backwards on the skates. This is thrust.

Next, a moment later, the bowling ball slams into the ground, generating lots of sound waves. Those sound waves won’t have taken away from the thrust generated earlier.

Similarly, exhaust gases slamming into the atmospheric gases will generate lots of sound, albeit by different mechanisms (outlined in the jet noise Wikipedia article linked above).

Now I do know that there are also tremendous sound waves that are generated inside the bodies of rockets that can damage the rocket and cause it to explode, and they must be mitigated (using fins, baffling, etc.). These internal sound waves are waste energy, but they are a relatively small fraction of the total sound generated.

“This sound energy is sufficient to kill a person or damage the surroundings. Thus NASA’s launch pads consists of large water tanks. As the rocket is launched these water tanks dumps one million lbs or water onto the  launch pad in just forty seconds. When the sound waves meet water, the bubbles of air absorb them. Further these bubbles contract and heat up, hence converting the sound energy into heat energy.”

EDIT Geez this question is extremely complex. Sorry I didn’t save links to these sources.

Not the answer you're looking for? Browse other questions tagged launch energy noise or ask your own question.

14
Which was louder, SRBs or SSMEs?
13
Why are rocket launches so loud?
1
What is the relation between the rocket equation and work, energy and power?

11
What is the "launch energy" or C₃ measured in km² / s²
17
How much Energy is required to put 1 kg in LEO?
2
How much energy is required to send a payload of 40 t from Earth's surface to LEO?
14
How risky is launching a rocket during a geomagnetic and solar radiation storm?
1
What is the relation between the rocket equation and work, energy and power?
2
Energy needed to open/close entry points in a rocket
5
How much noise would the BFR make at launch?
4
Do the astronauts hear noise in their headsets?
11
Vibration and noise during launch of the Saturn V and Spaceshuttle in comparison?