Alternative to GPS navigation for vertical landing, especially on other planets

There are a couple of questions here, I will try to answer them all.

Q1: Is GPS only valid below GEO orbits?

A1: For the most part yes, because GPS satellites transmission are pointed at earth. (Minor Technical correction: GPS satellites are not in fact in Geosynchronous orbits. They are in MEO orbits which are only half way to GEO by altitude)

However the GPS transmitter use fairly wide beams which can be heard from the other side of the planet on their side lobes (see image). These transmissions can be and have been used for localization on spacecraft above the GPS constellation (This is sometimes called the "inside out solution"). The GPS position calculation has to be changed from my understanding, but otherwise works fine and actually has pretty good accuracy (10s of meters). Go here to read the nitty gritty details of how this works. 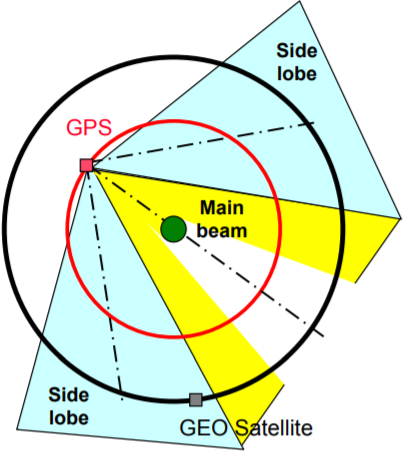 Q2: What are alternative to GPS based navigation above GEO.

A2: For near earth operation the GPS solution above still works, however signal strength loss will kill that option after a certain distance away from earth.

For free space operations generally spacecraft use rate-range and angles to do navigation. You can read about ESA's range-rate navigation here.

Range rate navigation can be slow since you have to 1) send a signal to the spacecraft and wait for it to return to get the time of flight. 2) Calculate the position from this and the rate (velocity) based on the measured Doppler shift and finally 3) send this position back to the spacecraft. This method works fine for anything where the dynamics happen over the course of hours (basically any orbit). It breaks down when you try to land on another extraterrestrial body like the moon or Mars.

In those cases something called terrain relative navigation is used. It uses computer vision to localize itself based on what a camera see versus what maps show as there. TRN is what curiosity used to land on Mars

...for the purpose of vertical landing especially on other planets, what is the alternative to GPS navigation?

Terrain recognition and imaging, and if there's a landing pad, some radio and optical beacons and possibly even a big "X" or other reflective (optical) or topographic (radar) marker if somebody with a company with an "X" in the name already put an "X marks the spot" up there.

There is a lot more information in this answer to how and why is image processing used on spacecrafts?, but here's the NASA GIF

See How did Chang'e-4 hover, rotate, and then descend so gracefully? (Video) for more about this!

Radar might be helpful for terrain recognition and it works at night, but the problem is that with a wavelength so much longer than optical you can't directly image very easily. Instead what's usually used is side-looking radar especially combined with synthetic aperture techniques. Since you generally have to look sideways to image terrain with radar, this might be most helpful when you still have some forward motion to scout for a landing site, but final vertical descent can't really use side-looking radar.

For more on this see How can ICEYE-X1 capture 2D high resolution SAR images in "tens of seconds"? and this answer to Detailed radar imaging of Tiangong-1; how do they do that? where the equivalence to side-looking is understood from

...The motion of the target is what provides the baseline.

If a landing site has been prepared ahead of time, it could be equipped with blinking lights or other optical beacons, and possibly radio beacons as well. Early developments of the use of radio is detailed in Arthur C. Clarke's excellent Glide Path.

For an example of what this could look like from orbit, see What is this huge, red, blinking light structure on Earth seen from the ISS in this video?

This answer to During final descent how will InSight know cardinal directions in order to land with proper orientation? begins with

and although the question and answer are related to attitude, an inertial guidance system will provide some information about current 3D position and velocity relative to the surface. Combined with and constantly calibrated against Terrain-Relative Navigation discussed above, inertial measurements can provide critical information, especially if exhaust blows up a huge amount of dust as the craft approaches the surface during the vertical landing phase.

Radar and gamma rays for a gentle touchdown

The timing of radar pings can give the distance to the surface to pretty high accuracy, and this might be important for a gentle touchdown. I don't have any proof, but I would expect that the Falcon-9 landings might use radar for proximity to the landing surface as additional feedback for engine throttling, since they need a gentle landing to avoid breaking a leg.

Some spacecraft use backscattered gamma rays from a radioactive source to automatically trigger retropropulsion at the last split-second to make the landing more gentle for humans. For more on that see:

So, you have basically 2 questions:

1.) vertical landing ... 2.) Navigation outside of earths shere of influence

Let us start with 1.) : Typical extra-terrestial landers are equipt with radar altimeter:

The Apollo LM had a radar altimeter

Radar altimeter can give you a quite precise altitude over Ground AND thanks to Doppler also the velocity you have relative to the ground.

The 2.) is not so easy: Navigation outside earths shere of influence:

Typically you can quite good determine your atitude by star trackers. Basically cameras looking on specific stars telling you in which direction they are.

Due to the typical long duration of extra-terrestial space missions, inertial navigation is not the first choise so you end up in trusting Isaak Newton:

It is common to use earth based radar and telescopes to gather as much measurements about the spacecraft as possible, then you put them into an orbit determiantion software and the result is a calculated/determined Orbit. In most cases you can also calculate the uncertainty of the determined orbit. this procedure is re-done regulary so you calculate the position.

Not the answer you're looking for? Browse other questions tagged rockets gps vertical-landing or ask your own question.

39
Soyuz landing ground detection
20
How far up have satellites used a GNSS for positioning, and how does the precision degrade with altitude?
16
Are launch windows to Mars avoided if they result in landings during dust storm season?
13
Detailed radar imaging of Tiangong-1; how do they do that?
12
How does a gamma ray altimeter work? What kind of sensor is used?
10
What is this huge, red, blinking light structure on Earth seen from the ISS in this video?
7
Did the Apollo LM's cockpit altitude displays account for the pointing angle of the radar altimeter?
4
GPS constellation for Mars
3
How can ICEYE-X1 capture 2D high resolution SAR images in "tens of seconds"?
9
Would a GPS type system on Mars really need a ground station?
See more linked questions

20
How far up have satellites used a GNSS for positioning, and how does the precision degrade with altitude?
15
Can the satellites in Martian orbit be put to use providing a rudimentary GPS system on Mars?
42
Why are the GPS constellation satellites in such a high orbit?
7
How far from earth have atomic clocks (or ultra-stable oscillators) been placed and monitored?
13
Will Glonass, Galileo, or BeiDou-2 satellites provide better cis-lunar navigation than GPS?
10
What is required to make GPS signals available indoors?
2
Does GPS spoofing ever come from space? How are spoofings usually detected?
3
When going to Mars, how do you measure exact distances to determine course corrections?
4
Ephemeris time and clock corrections in RINEX navigation files