Maneuver in the intersection of 2 orbits

The perigee altitude of the final orbit is not given. I have to perform a minimal single impulsive thrust in the intersection of the orbits. How should I mathematically build the equation?

You've fully described the first orbit (assuming 2D), and have fixed two of the three parameters of the second orbit, leaving the perigee to float. I assume you only care about hitting the apogee exactly at 60 degrees.

The minimum impulsive thrust will occur will occur when the new orbit is tangential to the old orbit, so you are thrusting directly along the path of motion. This means we have to set up the equations of the orbits and iterate to find the perigee value where there's only one solution, because exactly solving tangential ellipses is going to result in some infinite series somewhere.

Note that the tangent will not be at perigee on either orbit!

Playing with it to get the right value for rp2 (biggest number you can enter before you end up with no solutions in the NSolve), we get: 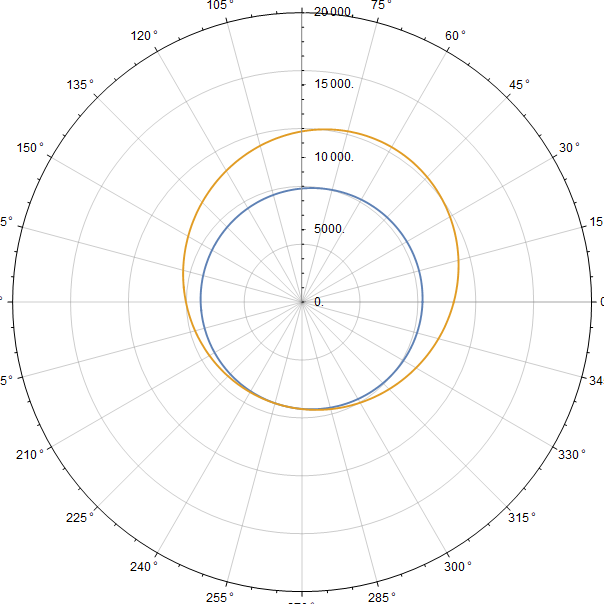 So - 705m/s impulse prograde when your orbit hits 260.4 degrees (at an altitude of 907.6km) and you should end up in an orbit that puts you at apogee and angle of periapsis required.

(Someone may want to check my results)

Yes, this is not a full answer, but maybe my thoughts will help you to work out the solution by yourself. Or someone else will connect the loose threads:

First of all I recommend another notation: "R" should be reserved for the distance between the object and the orbits focus so I recommend using "Alt" instead. "RA" is common for "right ascension" so I will use: Alt_Apo and Alt_Peri, R = R_Earth + Alt

There is a rule of thumb saying: "a maneuver perpendicular to the R-vector is the most fuel efficient", so to fulfill the "minimal" in "minimal single thrust" we should not consider other maneuvers.

Another rule of thumb is: "a maneuver perpendicular to the R-vector mainly affects the opposite site of the orbit"

So based on this rules: your object should coast for 40 deg (from initial perigee) and thrust perpendicular to the R-vector till the Apogee reaches Alt_Apo,final = 6000 km. You would need to calculate the magnitude of R at the maneuver point and the in-track and radial velocity. Having the In-track velocity it is a simple vis-visa equation solution you have to solve.

Now there is one problem left, the initial orbit had an radial velocity component at the intersection/maneuver point. The final orbit should have none (otherwise this is not its Perigee)!

Maybe this will help you or someone to figure out the remaining rest. May I ask, is this a home-work, or do you need this for work?

8
Gravity drag Delta-v calculation for launches to orbit
5
How to model a continous burn and recalculate orbit properties post burn
3
Optimal change of argument of periapsis?
4
How to intuitively explain that tri-elliptic transfers are not better than bi-elliptic transfers?
5
Maneuver to the optimal point of a given orbit
4
Optimal transfer between to identical orbits with different RAAN
2
Is it OK to spend 3 tons of fuel for the orbit transfer?
4
Would it be possible to Boost ISS to L1 or Lunar Orbit?
4
Convert the impulsive solution to a low-thrust