Does Jonathan McDowell access U.S. military tracking network data? If so, how? Is a security clearance involved? (Can I too?)

NPR's news item and audio podcast New Chinese Space Plane Landed At Mysterious Air Base, Evidence Suggests draws heavily from information and quotes from noted astronomer with the Harvard-Smithsonian Center for Astrophysics Jonathan McDowell who frequently tweets science and object tracking and it seems has also answered a question here.

They didn't give a launch time. They didn't give any more details," McDowell says. The U.S. military picked up the new spacecraft on its tracking network, and McDowell and others quickly plotted its orbit. When they did so, they found that China's new craft passed over a secretive military facility: an area called Lop Nur where China once tested its nuclear weapons.

Question: Does McDowell have some special security clearance in order to see what "The U.S. military picked up the new spacecraft on its tracking network" or does the US military put this information out there in a semi-public way that doesn't require a security clearance in order to see it. Or did McDowell use sources other than military, cf. How are military satellites with (apparently) classified TLEs still showing up on sat map websites? If the source is public, what is it? 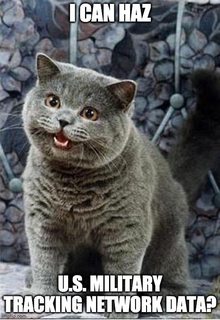 I don't think my question is inappropriate, because it is about a public figure's public statements in one of their fields of specialty. McDowell is also referenced in many other posts here in similar capacity, just for example:

I'm assuming the reference is to http://space-track.org, where the US government publishes its information on satellite locations to the world. I just checked, the plane is on the site. So far as I know he doesn't actively have a security clearance, but he does have access to some archival data that isn't easily accessible, and I believe he has at least some conversations with them to get some clarification on procedures and the likes.

Proof this is how he gets current TLE access:

Data for classified satellites is usually published by several satellite observers, who consider this a hobby.

Most recent occurrence would probably be NROL-44, which is set to launch in the coming days.

It should be noted, that due to the number of objects in space, several states continuously track these to avoid collisions.

It should also be noted, that start place, time and intended orbit need to be published by all states in advance. This is regulated by international treaty.

Not the answer you're looking for? Browse other questions tagged tracking spaceplane government security or ask your own question.

16
Is 678 km the new altitude record for a rocket shot “straight up” (vertical launch)?
11
How many rockets have been launched into space? (roughly, of course)
9
How (the heck) are military satellites with (apparently) classified TLEs still showing up on sat map websites?
13
Why is FAI considering lowering the Karman Line to 80km?
8
Did the Soviet Union put an unmanned satellite in “very low orbit”above the Kármán line which used aerodynamic attitude control?
16
Have spacecraft ever dipped below the Karman line and then safely continued spaceflight?
3
When is/will be the symposium to revisit the Karman line and consider the “McDowell line”?
3
Did Zuma complete at least one orbit?
2
When will SpaceX Falcon Heavy Tesla cross Mars orbit?

6
Are SpaceBEEs actually hard to track?
6
Will the new “TLE format” be orbitally-mechanically better than traditional TLEs?
2
How exactly does TDRSS provide tracking? (Tracking and Data Relay Satellite System)