Falcon 9 Merlin 1d thrust calculated through every moment of flight

I am currently trying to recreate the launch of falcon 9 in unity. For the calculations I need the thrust of the first stage (only doing it for one stage for now).

How to calculate it depending on the altitude? From values I have only ones from SpaceX (at sea level and in vacuum), but I need values at every moment of the flight. Any suggestions?

I am doing a simple 2d simulation, where rocket just is launched directly upwards.

I'm going to bang this out in English units because that's what I have a feel for and so am less likely to make an embarrassing mistake.

Let's use the thrust equation for non-airbreathing engines, copied from here From the General Thrust Equation towards Tsiolkovsky, how to explain dropping these terms along the way?

The first term to the right of the = is the momentum thrust. It's constant for a given throttle setting for what we are doing here.

We can solve for the exit plane area by filling in what we know in the two equations and subtracting one from the other. That gives us an exit plane area (for all nine engines) of 66 ft^2.

An (unsourced) answer to this question Temperature and pressure of rocket exhaust gives the Merlin exit plane pressure as 0.7 atm.

Quick sanity check: the momentum thrust you calculate should be bigger than the sea level thrust and less than the vacuum thrust.

With that and a handy-dandy atmosphere table we have all we need.

I rounded off everything so the numbers don't match exactly. Just walk through what I did, using your units of choice. Then in your program use the momentum thrust, exit plane pressure, and exit plane area that you calculated in the thrust equation, and plug in an ambient pressure that you got by your method of choice. 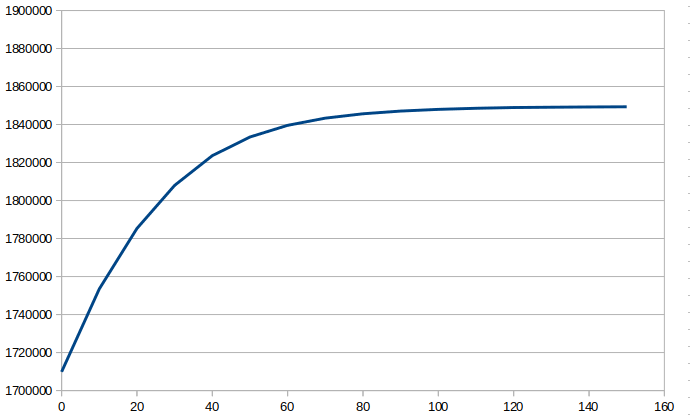 Concerning a dependence of a thrust from an altitude, solving a similar task I use the barometric formula to get the ambient pressure at given altitude. You can get a difference between known thrust (or specific impulse, if You want) in vacuum (Th1) and at sea level (Th0). This difference dTh = Th1 - Th0 will be multiplied by an altitude-dependent coefficient K, such that at sea level this coefficient will be equal to 1 and zero in vacuum. Then the product of the coefficient and the thrust difference is subtracted from the thrust (or specific impulse) in vacuum: Thrust_at_given_altitude = Th1 - dTh * K.

You need to get this coefficient K. Let's use the barometric formula for this: K = pressure_calculated_by_barometric_formula / pressure_at_sea_level.

I'm not sure that is an optimal way, it gives plausible results in my case (I use the GMAT program for rocket ascent modelling). But I'm still thinking about methodical correctness of this way.

Not the answer you're looking for? Browse other questions tagged spacex falcon-9 thrust merlin-1d or ask your own question.

12
Why does the core stage of the Ariane 5 produce more thrust in vacuum?
7
From the General Thrust Equation towards Tsiolkovsky, how to explain dropping these terms along the way?
3
Temperature and pressure of rocket exhaust
3
How throttle changes affect calculations of thrust?
1
Engine thrust gain with altitude
1
Sources for values for realistic thrust calculation exercise?

14
How is SpaceX going to land their Falcon first stage?
10
Mathematics used for SpaceX first stage re-entry burn guidance?
10
If it is difficult for Merlin engine to have deeper throttling, could it be as an option a different engine at the center of the rocket?
2
Modelling SpaceX's lift and drag versus angle of attack and Mach number
6
Falcon 9 Merlin engine thrust vectoring
22
Could SpaceX land on the moon today?
7
How did SpaceX achieve such a high Thrust to Weight ratio with the Merlin engine?
4
Why doesn't the Merlin 1-D use higher LOX to RP-1 mixture ratios?
3
How throttle changes affect calculations of thrust?