Is there any footage from Mars where you can see Deimos or Phobos getting bigger and smaller as it goes through the sky?

This answer mentions that on Mars, you can see its satellite get bigger and smaller as it rises and sets, because the satellite orbits much closer than our own Moon does from Earth.

I'm pretty sure some of the rovers and landers on Mars took footage (video or timelapse) of Mars' satellites. Are there any where you can see this phenomena?

The longest timelapse of a Martian moon I'm aware of is this 27 minute long timelapse of Phobos rising at June 28, 2013.

The light conditions, and the relatively small size of Phobos in the sky, makes the effect hard to see.

Phobos goes from horizon to horizon in approximately 4 hours 15 minutes, so this timelapse should cover about a ninth of the path.

At zenith, Phobos is 1.76 Mars radii away, and when setting, 2.57 radii away, and as such, Phobos should appear to have a 46% larger diameter. (only 3.6% for Deimos, which is also even smaller in the night sky). 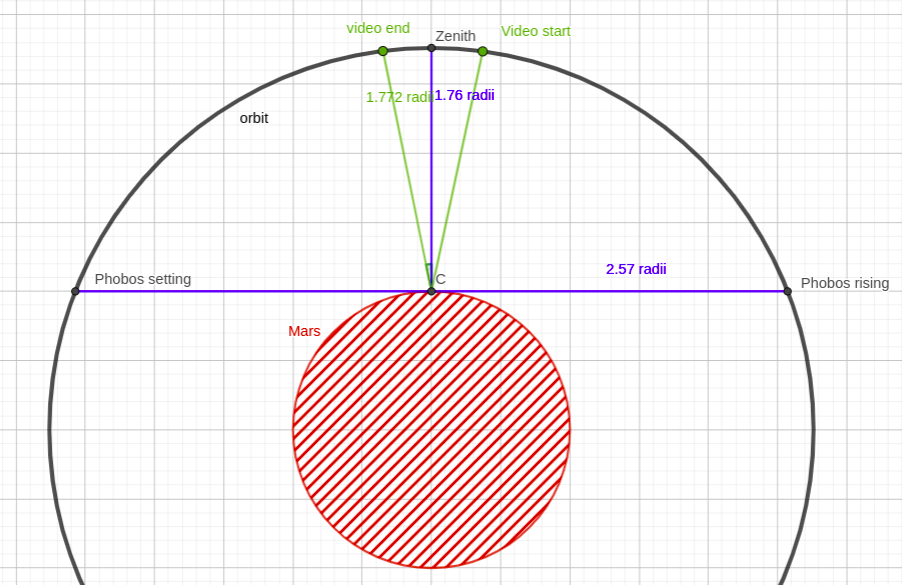 Unfortunately, the video is centred straight up, so it covers a segment where Phobos both grows larger and shrinks again. With a rough back-of-the-envelope calculation I estimate that as only a 1% change in diameter, so count your pixels!

A video covering Phobos near the horizon would give better results, even if it's shorter.

Here's such a clip from Spirit, but the image quality isn't good enough to see much beyond a moving blurry dot. One would probably need Curiosity footage for this.

Update: here's timelapse of Phobos rising over the horizon, and even slightly longer (32 minutes).

The atmosphere makes it hard to judge size,

If there are better timelapses, they are almost certain to be of Phobos, since the greater distance to Deimos makes the effect both weaker and less easy to observe: 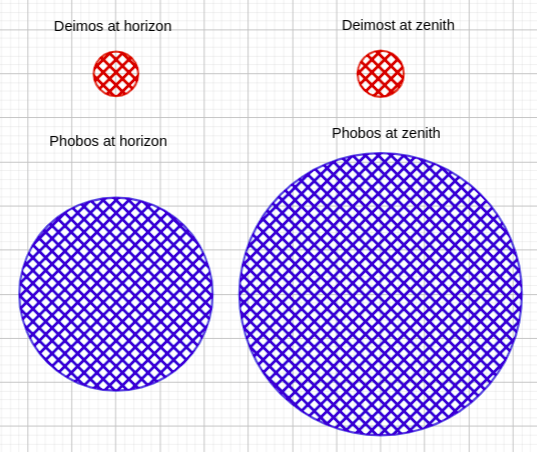 (relative size in the sky)

Not the answer you're looking for? Browse other questions tagged mars rovers video phobos deimos or ask your own question.

11
Any explanation for morphology of within crater formations on the northern Nili Patera caldera of the Syrtis Major volcanic plain of Mars?
17
Feasibility: self-sustaining colony on Mars vs. Space Station
18
What inspired the circular panels on the Phoenix Lander and InSight rover?
1
What will the US send to Mars as mentioned in this statement to the press?
2
Do you recognize these space artists who made this (possibly) first "paint-by-numbers" image of Mars?
7
Terraform via moving Ceres To Mars orbit, using ion drive
3
Why is a corner of InSight's selfie cropped like this?
8
Why is there no microscope on the Mars 2020 rover?
4
What would be the trajectory and initial speed of a chunk launched from Phobos to get as close as possible to any pole of Mars?